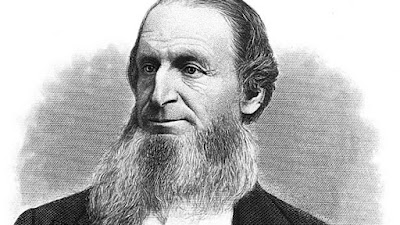 John Mills Van Osdel was Chicago’s first professional architect, shaping the city from its earliest days through the Chicago Fire and beyond.  Although Van Osdel’s output was huge, only a small number of his buildings remain today to remind us of this seminal figure in the development of Chicago’s architectural profession.

Van Osdel was born in Baltimore, Maryland in 1811, the son of a carpenter.  He took up his father’s profession at an early age, carpentry at that time also including architecture, and he became deeply interested in the subject.  At the age of 19 he opened a school for prospective draftsmen and three years later published a book on carpentry.  In 1836, he relocated to New York, where he met William B. Ogden, a New York State assemblyman.  When Ogden moved to Chicago soon after, he invited Van Osdel to come with him to design his house, built on the block surrounded by Rush, Erie, Wabash, and Ontario.  This proved to be an important commission – Ogden was elected the first mayor of Chicago in 1837.

Frank Randall, in his volume History of Chicago Building, recounts the challenges the young Van Osdel faced when he first arrived in Chicago, as told by Van Osdel to Inland Architect in 1883:

“Passing from the landing toward Mr. Ogden’s office on Kinzie Street, he noticed a block of three buildings, three stories high, the fronts of which had fallen outward, and laid prone upon the street . . . the frost of the preceding winter had penetrated to a great depth below the foundations, and the buildings having a south front, the sun acting upon the frozen quicksand under the south half of the block rendered it incapable of sustaining the weight of the building.  At the same time, the rear or north part of the block, being in shadow, the frozen ground thawed gradually, and continued to support the weight resting on it. . . The front settled fourteen inches more than the rear, making all floors fourteen inches out of level from front to rear.  This movement pressed the upper part of the front wall outward beyond its center of gravity and it fell to the ground.”

Van Osdel’s first task was to restore this “ill-fated structure” and convert it to dwellings.  Over the next two years, Van Osdel designed two steamboats, built the first bridge across the north branch of the Chicago River, and assisted with the construction of the Illinois and Michigan Canal by building water pumps powered by a horizontal windmill, receiving the first patent ever issued for a citizen of Chicago.  He returned to New York for a year to serve as building department editor of the periodical American Mechanic (later Scientific American), but was back in Chicago in 1841.  After designing some of the first grain elevators in the city and co-founding an iron foundry, he opened his architectural office, the first in the city.

“In the winter of 1844 when builders were their own architects, some leading builders proposed to me that I open an architect’s office, pledging themselves not to make any drawings or construct any building of importance without a plan.  With this promise, I undertook to do so, and opened an office on Clark Street between the City Hall and the Post Office, occupying the site of the present Sherman House.  No one had ever used an architect and it was difficult to convince the owners of the necessity of such a branch of the building business.” 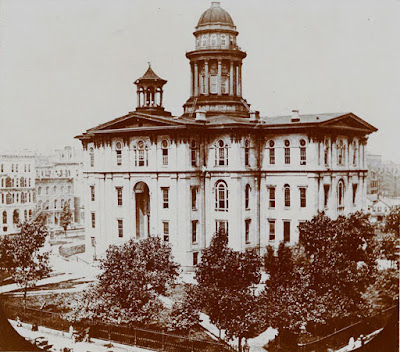 Van Osdel’s reputation quickly grew and he was awarded important commissions including both the 1848 and 1853 city hall and county courthouse, in addition to hotels, business blocks, and residences. 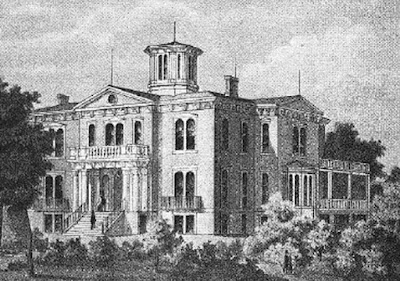 Van Osdel designed many additional buildings throughout Illinois and the Midwest including the McHenry County Courthouse in Woodstock (now the Old Courthouse Arts Center), and a residence for Governor Joel Aldrich Matteson in Springfield, which serves today as the Executive Mansion for the State of Illinois.

Starting in 1856, Van Osdel meticulously recorded the information about his buildings and his career in large ledger books.  Henry Ericsson, in his autobiography Sixty Years a Builder, recalls how Van Osdel preserved his books during the Great Chicago Fire:

“When, on that fateful and tragic night of October 8, 1871, John M. Van Osdel saw across the sky the flames advancing so menacingly toward the business section of the city, he hurried from his West Side home to his office where he gathered his priceless books, papers and records, and took them to the Palmer House . . . Two stories of the Palmer House were up, and from his working office there Van Osdel scooped up its plans, and with his other materials, went to the basement, where he dug a pit into which he carefully packed his books, instruments and papers.  He covered them with sand two-feet deep, and over all he patted down with his hands a thick layer of damp clay.  It is doubtful if any other incident of the great fire influenced building in a more important way, as we shall see, than Van Osdel’s tamping down with his hands this layer of clay over his precious working materials. . .” 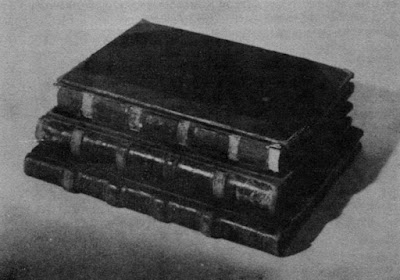 Just two years after the fire, Van Osdel encased the iron beams of his Kendall building with hollow clay tiles – the first fireproof building in Chicago. 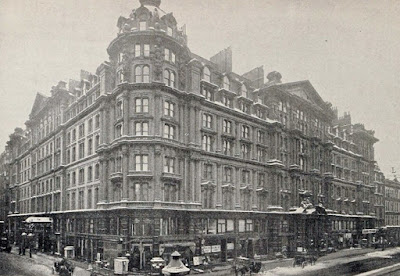 Van Osdel’s office took in as many commissions as it could possibly handle in the years immediately following the Fire.  Significant projects included the rebuilding of the Palmer House Hotel, the 1872 and 1885 City Halls, and countless office buildings and hotels.  The buildings at 129-139 N. Wabash Avenue, built for the Burton Estate, Peck family, and Couch Estate between 1872 and 1877 still stand, their classic Italianate facades typifying much of Van Osdel’s work of this period. 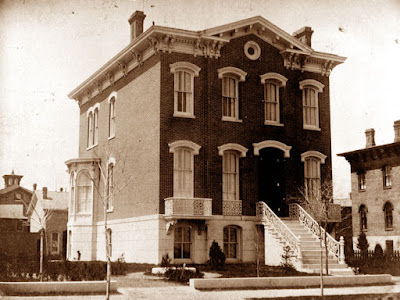 Van Osdel designed two houses on Chicago’s exclusive Prairie Avenue.  The first of these, at 1834 S. Prairie Avenue, was built in 1866 for one of Chicago’s earliest pioneers – Fernando Jones.  Jones was head of the abstract firm of Fernando Jones and Company, which merged with firms in 1877 to form Chicago Title and Trust Company.  The Italianate style house was razed in 1942. 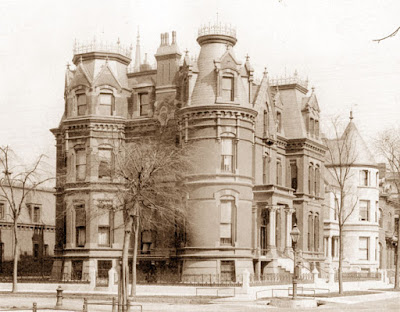 The second home was constructed in 1876 for William F. Tucker at 2140 S. Prairie Avenue, at the northwest corner of Twenty-Second Street (now Cermak Road).  The sizeable, Gothic-style residence was sold in 1881 to Byron L. Smith, founder and president of the Northern Trust Company.  It was razed in 1936.

Van Osdel received other commissions from Prairie Avenue residents as well, including a four-story office block for Silas B. Cobb at 165 W. Lake Street in 1872, and an office building for Robert Law at 230 S. Franklin in 1887.

His last commission was the Monon Building, located at 436-444 S. Dearborn Street.  It was the first 13-story building in the world.

In the early 1880s, Van Osdel moved to the south side, residing for a short time at 2401 South Park Avenue before making his final move to a residence at 2310 S. Indiana Avenue.  It was here that he died on December 21, 1891 at the age of 80.  He was interred at Rosehill Cemetery.  His wife remained in the house until her death in December 1895.  It was razed in the early 1900s during the rapid transformation of the neighborhood, and a business structure was constructed on the site.

Several of Van Osdel’s surviving buildings have been landmarked.  Among these is the Page Brothers Building, constructed in 1872 at 177-191 N. State Street.  The main entrance of the building was originally on Lake Street, and today that north elevation is one of only two cast-iron facades remaining in the city.  It was landmarked in 1983. 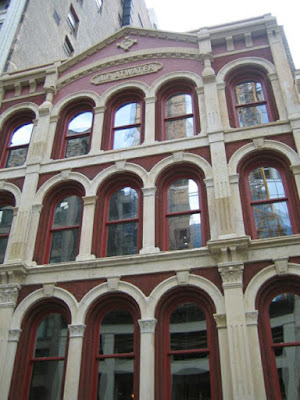 The Atwater Building was constructed in 1877 at 28 S. Wabash Avenue and was landmarked in 1996.  The red brick Italianate façade was restored in 2009 by Harboe Architects as part of their massive Sullivan Center project. 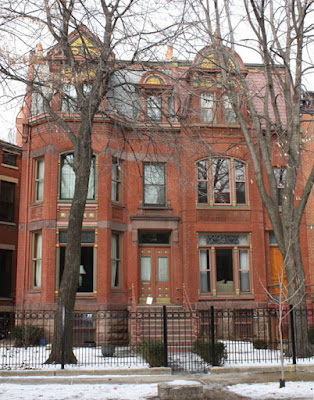 Three surviving residences stand on the 1500 block of West Jackson, part of the Jackson Boulevard District designated in 1976, including the Chisolm house at 1531, and the pair of houses shown above at 1516 and 1514 W. Jackson for the Merriman and Ross families. 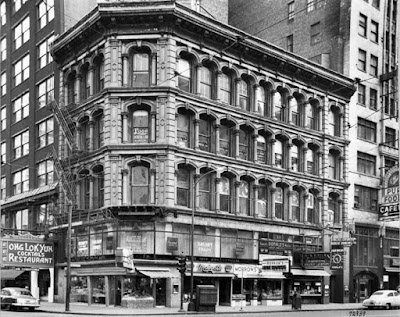 The McCarthy Building in 1951

The McCarthy Building at 32 W. Washington Street (corner of Dearborn) was constructed the year after the Fire and was designated a landmark.  Amid much controversy, the landmark status was revoked in 1987, and the McCarthy was demolished as part of the project to clear Block 37 for redevelopment by the city. 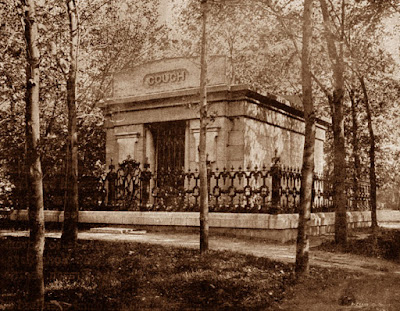 Other familiar commissions around the city include the Couch Mausoleum, the last remaining structure from the Old City Cemetery.  Built in 1857-1858, it now stands near the Chicago History Museum in Lincoln Park, the sole reminder of the era in which this was the main burying ground for the city.

Van Osdel also completed the façade and interior of Holy Family Church at 1080 W. Roosevelt.  Started by another architect in 1857, Van Osdel stepped in soon after and completed the building in 1860.

A Chicago Tribute Marker of Distinction was placed at the site of his former home at 2310 S. Indiana Avenue.  The marker program, a joint effort of the Chicago Department of Cultural Affairs, the Chicago Tribune, Foundation, and The Chicago Cultural Center Foundation, began in 1997, placing more than 80 markers around the city at sites connected with prominent Chicagoans.  Unfortunately the marker for Van Osdel is no longer standing, but the text can be viewed at http://www.chicagotribute.org/Markers/Osdel.htm

For more information on Van Osdel, see A Quarter Century of Chicago Architecture by John M. Van Osdel and Conrad Bryant Schaefer, published in 1898.  Also consult the online image library of many of his buildings available at http://digital-libraries.saic.edu/cdm/search/collection/mqc/searchterm/Van%20Osdel,%20John%20M./mode/exact