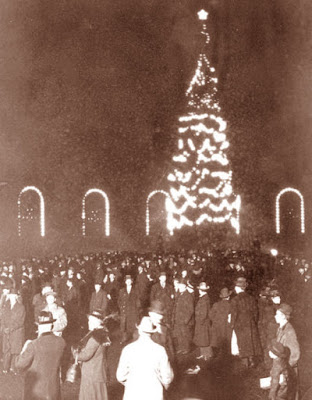 On Tuesday, November 24, 2015, the City of Chicago will conduct its 102nd annual Christmas Tree Lighting Ceremony.  The tree will be located in Millennium Park at Michigan Avenue and Washington Street, just two blocks north of the location of Chicago’s first Christmas tree in 1913.  Since 1966, the official Christmas tree has stood in Daley Plaza (except for 1982 when it was placed at State Street and Wacker Drive).  In this article, we will look at the beginning of the decades long tradition of the placement of the tree in Grant Park. 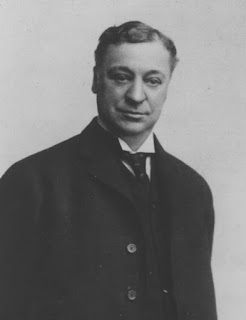 The idea for the 1913 municipal Christmas tree started many weeks in advance with the creation of the Municipal Christmas Festival Association headed by Charles L. Hutchinson, long time president of the Art Institute.  Hutchinson assembled an impressive list of artisans to assist the effort including architect Howard Van Doren Shaw, and artists Frederic Clay Bartlett, Abram Poole, and Lorado Taft, all of whom “(put) aside their own personal affairs in a public spirited way.”

A large site in Grant Park north of the Art Institute at Monroe Street was selected and christened the “Court of Honor” – a name last used during the World’s Columbian Exposition of 1893.  In addition to the main tree itself, a large arcade consisting of a series of arches served as a backdrop, with dozens of smaller trees forming a grove. 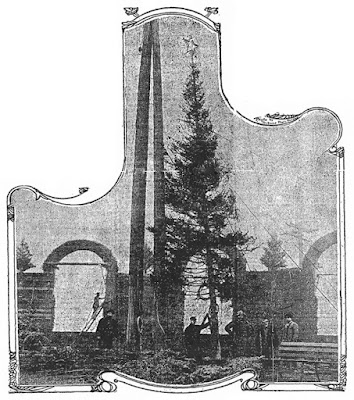 On December 19, the top section of the tree was set in place atop a grouping of three huge telephone poles secured in a concrete base.  The top was a single 35-foot tree donated by F. J. Jordan, a former partner of Captain Herman Scheunemann, the famous captain of Chicago’s “Christmas Tree Ship” which had gone down in Lake Michigan the previous year.   In an article which appeared in the Chicago Tribune on December 20, Jordan noted:

“This is the best gift I could give to the city.  I have watched this old tree grow for many years.  Many times I was tempted to bring it to some rich family.  But it didn’t seem quite right to the poor girl and poor boy, who had no tree at all.  Now it belongs to the city, and rich and poor alike may enjoy it.” 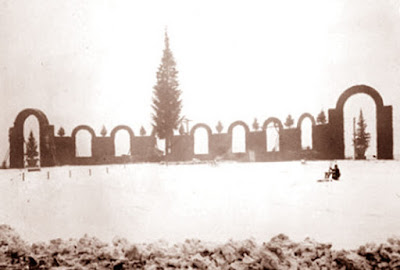 The telephone company funded the erection of the tree and Commonwealth Edison furnished the elaborate lighting.  As such, the actual cost of the whole project was only $3,000 – funded by businessmen appointed to the Municipal Christmas Festival Association, and their friends.  Henry Blair donated 25,000 tickets on the street railways which were distributed through various social service agencies to children who would otherwise be unable to attend the festivities.

Crowds began to gather by 4:00pm on Christmas Eve, lining both sides of Michigan Avenue between Monroe and Washington Streets.  The Chicago Band provided entertainment.  Michigan Avenue was closed to traffic at 5:30pm and soon after, Mayor Carter H. Harrison Jr. arrived in the company of Charles L. Hutchinson, with a squadron of twelve mounted buglers from the Illinois National Guard acting as escort.  The ceremony began at 5:45pm.  Charles Hutchinson opened the festivities, concluding with the introduction of the mayor, who ended his remarks with the following statement:

“Let us hope the lights on this tree will so shine out as to be an inspiration to Christian charity and to inject new courage and new hope into the hearts of those not so fortunate as we are.” 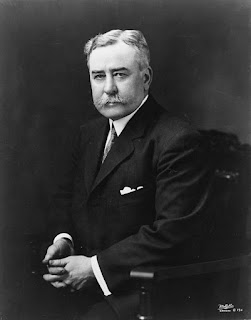 At precisely 6:00pm, the mayor pushed a button to illuminate the 600 varicolored bulbs on the tree and the huge star of Bethlehem at its apex.  The crowd, estimated at 100,000, most of whom had been unable to hear the mayor’s speech, “cheered lustily.”

One of the more creative aspects of the ceremony setting was designed by artist Abram Poole in collaboration with the Illinois Central Railroad.  The railroad agreed to stop all of its trains during the ceremony and installed a half dozen engines behind the Court of Honor.  According to a Tribune article on December 21:

“Abram Poole has designed a scheme of color and lights such as Chicago has never seen since the nights of splendor at the world’s fair.  The colonnade, which is to form a background for the tree, is to be all trimmed with green, festooned with lights of all kinds, steady and flickering, and behind this will be a crimson splendor of Bengal lights on a still larger, more distant background of white, rolling, billowing, changing steam.” 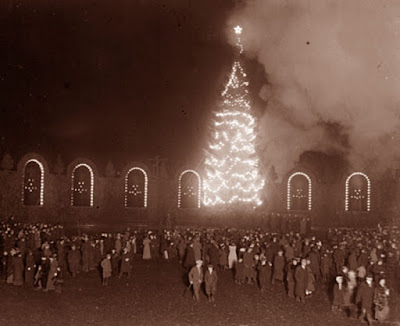 A “motion picture machine” was installed in one of the office buildings on the west side of Michigan Avenue in order to project onto a huge screen installed between the Christmas tree and the Art Institute.  This was probably the least successful element of the ceremony, as the films did not relate to the holiday festivities, but instead were provided by the Public Safety Commission “to show how carelessness may result in accident.”

Following the illumination of the tree, the band, housed at the north end of the grounds, played a “Salute to the Nations” – a medley of national anthems. 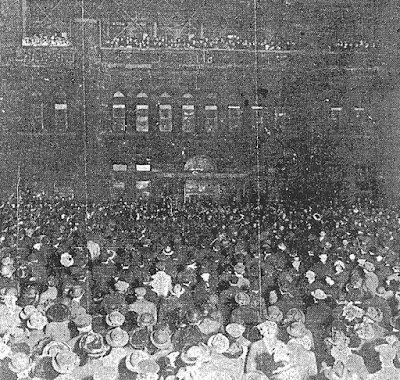 The crowd then turned to hear a trumpet fanfare coming from the Venetian balcony of the Chicago Athletic Association.  An improvised sounding board had been added to the balcony to improve sound quality and the balustrade was draped in rich red velvet draperies borrowed from the Art Institute.  Bass Henri Scott and tenor George Hamlin sang selections from opera, followed by the opera company chorus and Paulist choir singing selections from the north terrace of the Art Institute.   The ceremony concluded with everyone present joining in the singing of “The Star Spangled Banner.”  The crowd lingered for hours.

The tree was illuminated nightly throughout Christmas week until New Year’s Day.  The Association pronounced the entire event a huge success, with the hopes that it would become an annual event.  More than a century later, we can thank these civic minded individuals for starting what has become one of Chicago’s most anticipated and best loved holiday traditions.