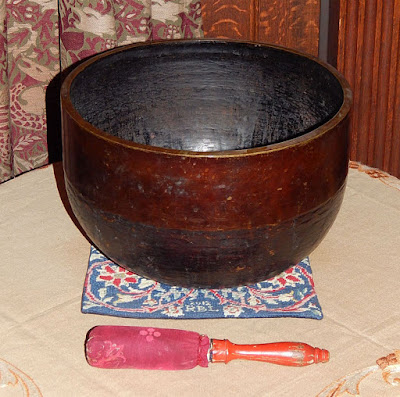 One of the first objects visitors notice upon entering the Glessner house is a large bronze bowl set upon a table in the main hall.  Displaying a dark patinated finish, the bowl measures 9-1/2 inches in height and 14 inches in diameter.  The piece is yet another example of the Glessners’ interest in Japanese design.

Known as a singing bowl, the piece is a standing bell positioned with its bottom surface resting on a cushion.  The rim of the bowl vibrates to produce a beautiful tone, thus the origin of its name.  John Glessner makes mention of the bowl in a manuscript describing the contents of the house:

“ . . . a Japanese temple gong of sweet tone, from the celebrated Captain Binkley collection.” 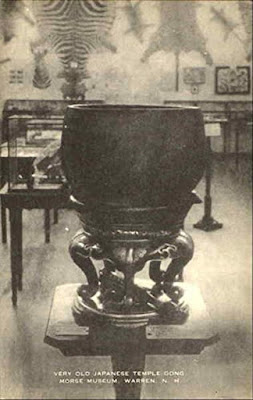 Although the reference to Captain Binkley and his celebrated collection has been lost to time, the reference does verify that the piece is Japanese in origin.  These bowls, or gongs, are found in all Japanese temples.  An important part of Buddhist worship, the bowls are rung to signal the beginning and ending of periods of silent meditation.  They are also used during chanting, and are an important element in traditional Japanese funeral rites and ancestor worship. 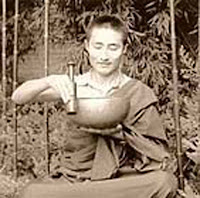 The bowls were also widely made and used in Tibet, Nepal, and China.  Accompanied by a mallet (seen in the foreground of the photo at top), they could be rung in two ways.  One was to strike the rim of the bowl with the padded end of the mallet, producing a deep tone.  The other was to slowly rub the wooden end of the mallet around the exterior perimeter of the bowl, gradually producing a sweet higher pitched tone that “sung.”

Frances Glessner made the following journal entry for December 31, 1893:

“At nine some invited friends commenced to come.  Then Mr. and Mrs. Thomas and Marion came.  Mr. Thomas brought a trio of the best from the orchestra – and the harpist Schuecker.  We had a bright drift wood fire in the hall and turned the lights all out.  There were about thirty guests in all.  We all sat about this lovely fire…The music the trio played was all from Beethoven and Mozart – it was as it was originally written – and was of the most exquisite character.  The harpist played beautifully.  We had him come out in the hall for one number and sit in the fire light.  At Mr. Thomas struck the hour on our Japanese gong.  We all congratulated each other.  John proposed my health in a beautiful toast to me – all drunk it in some hot mulled claret.  Mrs. Stevenson made a very flattering toast.  Then we had more sweet, sweet music – and all went home half after one. It was very rare artistic evening.”

(Notes:  “Mr. Thomas” was Theodore Thomas, first music director of the Chicago Orchestra – later the Chicago Symphony Orchestra – and a very close friend of the Glessners.  Frances Glessner’s birthday was January 1, hence the toast from her husband).

Frances Glessner herself had the honor of striking the gong on December 31, 1909:

“We had our dinner at 8 o’clock.  The Stocks, Johnsons, Wessels, Anne, Mrs. Kennedy, Mrs. Morron were here.  Frances had a dinner for 10 – all came here at ten o’clock and we had Miss Reid who imitated a passé prima donna, Will Collins who sang songs and told stories, and McConnick who brought his trained dog Bronte.  He also gave clever imitations of bird songs.  We all laughed until we ached.  At midnight we had champagne and claret cup, ice cream and cake and I struck twelve on the gong.  We circled round and sang Auld Lang Syne – hoch etc. etc.  John proposed a beautiful toast to Mr. Stock and another to me at midnight.  I gave Mr. Stock a letter from Mendelssohn, one from Jenny Lind and an old engraving of Jenny Lind.”

(Note:  Frederick Stock, one of the Glessners’ most intimate friends, served as music director of the Chicago Symphony Orchestra from 1905 until his death in 1942.  The New Year’s Eve celebration followed the afternoon premier of his Symphony No. 1 which he dedicated to John and Frances Glessner). 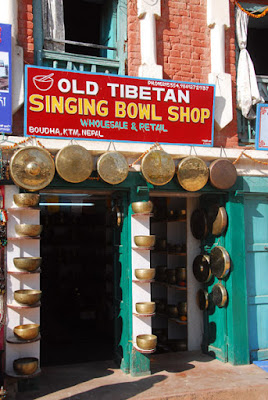 Singing bowls are now widely available and are commonly used in meditation, although most of these are much smaller than the Glessners' bowl so that they can be held in the palm of the hand.
Posted by Glessner House Museum at 7:53 PM