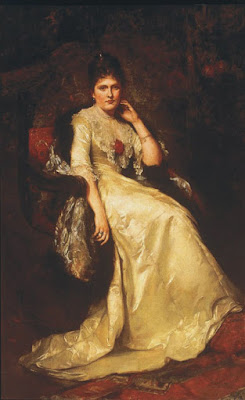 Maud Howe Elliott was an American author and the daughter of Julia Ward Howe.  A close friend of Frances Glessner, she was frequently a guest in her homes both in Chicago and in New Hampshire.  In this article, we will reflect back upon a series of lectures given by Elliott in Chicago exactly 125 years ago.

In November 1890, Frances Glessner pasted the following card into her journal:

Will you kindly return the ticket or its equivalent,
at your earliest convenience, to
Mrs. John J. Glessner
1800 Prairie Avenue

Maud Howe was born on November 9, 1854 in Boston, Massachusetts.  Her father, Dr. Samuel Gridley Howe, was the founder and director of the Perkins School for the Blind in Boston. 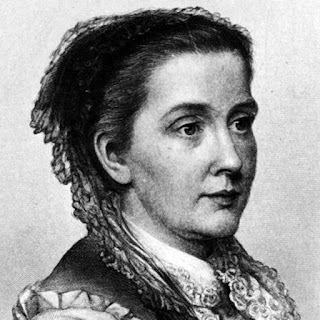 Her mother, Julia Ward Howe, was an abolitionist, suffragist, and poet, best remembered today as the author of the “Battle Hymn of the Republic.”  She was privately educated by her mother in the United States in Europe; her mentors included Ralph Waldo Emerson and Henry Wadsworth Longfellow.  In 1887, Maud Howe married the English artist John Elliott.

On November 10, 1890, the Elliotts arrived in Chicago and settled into the guestroom at the Glessners’ Prairie Avenue home.  During the week that followed Frances Glessner and Maud Howe Elliott attended numerous concerts, lectures, teas, and dinners.  Within a couple of days of the Elliotts’ departure, Frances Glessner received a letter stating in part:

“A home sicker pair than John Elliott and his wife, rarely sat down to a boarding house dinner!  And we were homesick not for Boston but for Prairie Avenue! . . . I shall see you tomorrow.  Goodbye, blessed saint of hospitality.  Your good offices to us, are written in the record book of our hearts and will not be forgotten, while our memories are intact.
Your attached
M.H.E.” 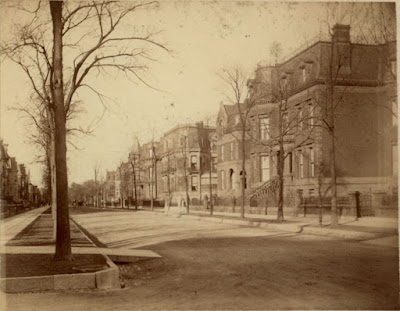 Elliott returned to Chicago to give her first talk at the home of Mrs. Charles Schwartz on Wednesday November 19th.  (Within a few years the house was sold to Marshall Field Jr.; it still stands today).  Frances Glessner noted:

“Last Wednesday I paid some neighborhood calls after luncheon – and then went to Mrs. Schwartz’s to hear Mrs. Elliott’s first South Side reading.  There were nearly a hundred ladies there – it was very pleasant.  I have given Mrs. Elliott $710.00 for this course.”

Following the second reading at Mrs. Schwartz’s, Frances Glessner noted that “Mrs. Elliott said that I inspired her paper by some questions which I asked her at The Rocks.”

The Elliotts had visited The Rocks during the summer of 1890.  Maud Howe Elliott used the opportunity to write; her husband, to sketch.  John Elliott also provided some evening entertainment as noted, “Tonight Mr. Elliott did the polar bear, the monkey, the old lady, and danced.”

Frances Glessner also noted an interesting incident that took place when their piano was tuned:

“This afternoon our blind piano tuner came out and tuned the piano – he proved to be John Denny who was educated at the Perkins Institute for the Blind which was founded by Dr. Howe.  This man had played with Mrs. Elliott when she was a child.  They were very glad to meet – to see her as the blind man expressed it.”

When the Elliotts left The Rocks on August 4th, Maud Howe Elliott made the following entry in the guest book:

“These days passed at The Rocks (days as full of pleasure as the comb of honey) are strong upon our memory as pearls upon the rosary of Time.”

A few days later, Elliott wrote from Newport where she gave a detailed account of a party at the Vanderbilt “cottage.”  She noted, in part:

It has been very hard for me to ‘wait until after the Vanderbilt party,’ as was agreed between us!  I have wanted continually to write you to let my words follow my thoughts back to the beloved Rocks, and the encircling hills blue and mysterious, they haunt my memory, they and the song of the hermit thrush, the genius of the place.

Wednesday night we came down to Newport on the Fall River boat, bringing Miss Gardner with us.  We found my dear mother well.  When Thursday came I felt rather indifferent about the garden party, but my promise was given!  Mama and I went together.  The Vanderbilt’s home is on the cliffs, with wonderful lawn leading down to the cliffs which overhang the ocean.  We passed in . . . across the house and out to the lawn where the hostess stood under a group of tall palms.  She is a prettyish little lady, and looked well in her simple frock of white woolen stuff embroidered with gold thread.  She wore no jewels, and a simple, pretty hat.  There were two bands, one a mandolin band, the other (well out of earshot) a full stringed and brass band.  The refreshments were served in a large red Marquee.  The table was superb.  Two immense silver punch bowls of beautiful repoussé work.  The centerpiece was very lovely, all manner of water lilies.  I never saw some of the variety before.  These were great white lilies shaped like poppies big as a large peony, pink ones of the same color, beautiful tropical looking things besides water lilies of the ordinary shape in every shade of blue and pink, the deepest being claret color.  The food was fine, I believe, I only remember a figure of George Washington in ice cream.  There was a menu upon the table and most wonderful looking dishes savory and sweet, all made by the chefs of the houses Vanderbilt.” 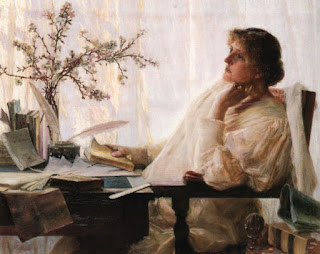 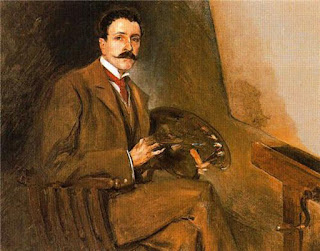 The Elliotts lived in Chicago for a time and then in Italy for a number of years before permanently settling in Newport in 1910.  In 1918, the Elliotts purchased a mansion at 150 Rhode Island Avenue in Newport which she called “Lilliput.”  She continued her writing here, eventually publishing twenty books.  The best known of her works, The Life of Julia Ward Howe, co-authored by her sisters Laura Richards and Florence Hall, earned them the first Pulitzer Prize for biography in 1917. 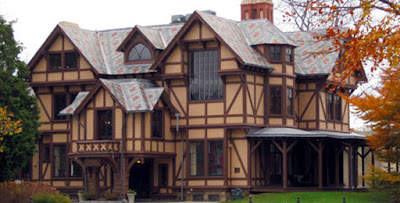 Maud Howe Elliott was a patron of the arts, and was the founder of the Newport Art Association organized in 1912 for “the cultivation of artistic endeavor and interest amongst the citizens of Newport.”  The organization purchased the John N. A. Griswold House on Bellevue Avenue in 1915 (a National Historic Landmark designed by Richard Morris Hunt and completed in 1864); it continues to serve as the home of the Newport Art Museum.  Maud Howe Elliott’s portrait (shown at the top of this article) hangs over the fireplace in the library.  She served as secretary of the Association for thirty years.

John Elliott died in 1925.  Maud Howe Elliott continued writing, publishing her final book, This Was My Newport, in 1944, when she was ninety years old.  She died on March 19, 1948 and was interred at Mt. Auburn Cemetery in Cambridge, Massachusetts alongside her husband and parents.  Her papers were given to Brown University, which had awarded her an honorary doctorate in 1940.