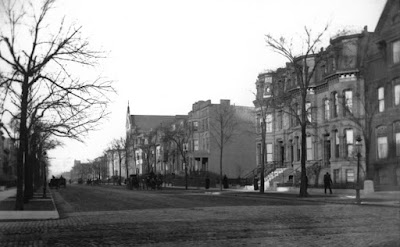 
During the month of June, we will explore some of the lesser known stories of Prairie Avenue. We start with a look at architect Louis Sullivan, who, although he never saw one of his creations erected on Prairie Avenue, designed a number of buildings in the immediate vicinity, and received several business commissions from Prairie Avenue residents.

Louis Sullivan came to Chicago in 1873 to take advantage of the limitless work available for architects in the years following the Great Chicago Fire. Within a year of his arrival, he is known to have walked down Prairie Avenue, which had established itself as the preeminent street for Chicago’s business and social leaders to build their homes. In his Autobiography of an Idea, published in the year of his death, 1924, Sullivan recounted (in the third person) his discovery of the Sherman house at 2100 S. Prairie Avenue:

“In his eighteenth year . . . He had occasion one day to pass in the neighborhood of Prairie Avenue and Twenty-first Street . . . There, on the southwest corner of the intersection, his eye was attracted by a residence, nearing completion, which seemed far better than the average run of such structures inasmuch as it exhibited a certain allure of style indicating personality.” 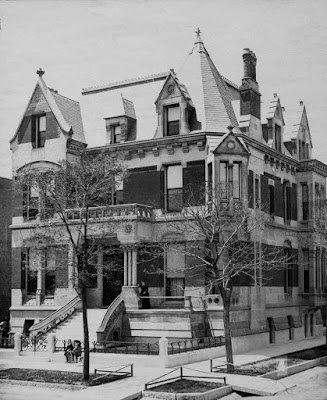 The house had been commissioned by John B. Sherman, president of the stockyards, and for the design, he engaged the newly formed firm of Burnham & Root. It was their second commission and led not only to Daniel Burnham’s marriage to Sherman’s daughter Margaret, but also to numerous commissions on Prairie Avenue. The style of the house was Ruskinian Gothic, and in comparing it to early residential commissions by Adler & Sullivan, one can see certain connections in massing and ornamentation.

Soon after this encounter, Sullivan received one of his very first projects just one block to the west of the Sherman house. The Sinai congregation had been established in 1861 as the first reformed synagogue in the city of Chicago. In 1875, architects Burling & Adler were engaged to design the new Sinai Temple at 2100 S. Indiana Avenue, with interior decoration by the firm of Johnston & Edelmann. 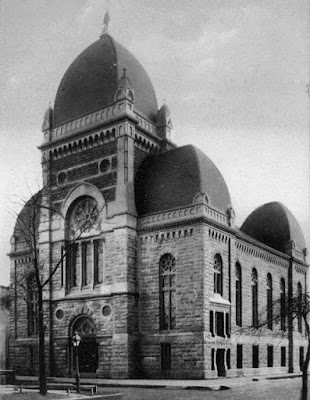 Sullivan returned to Chicago in 1876 from his time at the Ecole des Beaux Arts in Paris, and immediately went to work for his friend John Edelmann in producing fresco secco decoration for the interior of the temple. The term fresco secco refers to the technique of painting on dry plaster using pigments mixed in water. Few photos survive showing Sullivan’s decorative scheme, but the image below hints at the beginnings of his trademark ornament, and one can only imagine what it must have looked like in color. 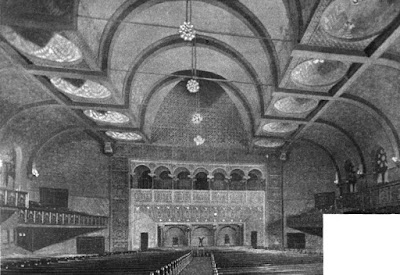 The commission was important in that it marked the introduction of Sullivan to his future partner, Dankmar Adler, who would hire him three years later. Adler’s standing in the Jewish community was significant, his father Liebman serving as the rabbi of Chicago’s oldest Jewish congregation, Kehilath Anshe Ma’ariv. Many of the commissions in the Prairie Avenue neighborhood came from the sizable Jewish community based there.

The firm of Adler & Sullivan would be engaged by the Sinai congregation two more times – in 1884 to add the side galleries and in 1891 to construct a large addition to the rear of the building. The temple was demolished in 1912 when the congregation moved farther south during the rapid decline of Prairie Avenue as a residential area in the early 1900s.

One of the firm’s most loyal clients was Max M. Rothschild, who resided at 2112 S. Prairie Avenue. He and his brothers were the owners of a dry-goods company known as E. Rothschild & Brothers. In 1880 the firm commissioned a five-story store at 212 W. Madison Street with offices and salesrooms on the first two floors, and wide-open spaces on the upper floors to accommodate the manufacture of clothing. A cast-iron façade allowed for large windows to illuminate each floor of the narrow, deep building. The cornice was richly decorated with Sullivan ornament and portions were salvaged when the building was demolished in 1972. Two sections are displayed in the grand stair of the Art Institute. 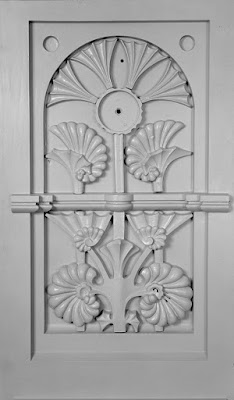 Between 1882 and 1884, Max Rothschild provided Adler & Sullivan with three residential commissions designed as income producing properties. They were clustered a mile and a half south of Rothschild’s home, at 3200 S. Prairie Avenue and 3201-3205 S. Indiana Avenue, with the final three free-standing houses built on a single deep lot at 3200 S. Indiana Avenue. All have been demolished.

Dankmar Adler’s brother-in-law, Morris Selz, was a partner in the firm of Selz, Schwab & Company, makers of shoes and boots. In 1883, Selz commissioned a house on a 33-foot-wide lot at 1717 S. Michigan Avenue. The façade of brownstone and terra cotta is a fully realized expression of Sullivan’s ornamental abilities. Small particles of the stone were worked into the surface of the terra cotta to perfectly blend the two materials, and the lively pressed metal cornice was painted the same color, giving the appearance that the entire façade was carved brownstone. When the house was razed in 1967, a cast iron newel post from the front entry stairs, featuring curling tendrils and Egyptian-inspired floral motifs, was salvaged; it is now displayed at the Art Institute. 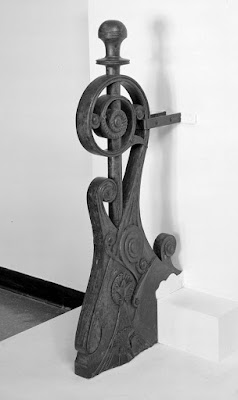 
In 1884, Selz’s business partner, Charles Schwab, commissioned a house next door at 1715 S. Michigan Avenue for his daughter, Anna McCormick, upon her marriage. The house was more modest in scale, being built on a 25-foot-wide lot and was faced with brick and terra cotta. Despite these differences, however, the two houses harmonized nicely, sharing sill lines and stringcourses, and the distinctive cornice. It was razed in 1970. 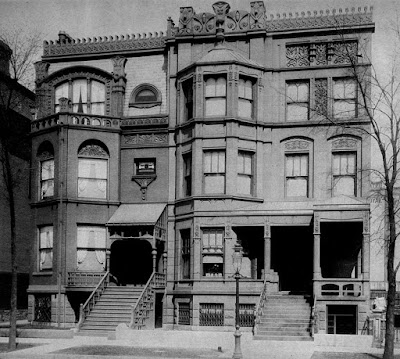 A third house, just a few doors to the north at 1705 S. Michigan Avenue, was commissioned in 1886 by Hannah Horner, the widow of the founder of Henry Horner & Company, an early wholesale grocery business in the city. Little is known about the row house, which was three stories in height with a façade of brick and stone. It was razed in the 1940s, and there are no known photos.

Adler & Sullivan received several factory commissions from area residents. In 1886, the owners of Selz, Schwab & Company engaged the firm to design their large new four-story factory at Superior and Larrabee Streets. Containing nearly 90,000 square feet of space, the simple unornamented brick facades were enlivened with tall narrow piers, maximizing the size of the window openings. It is no longer standing.

The same year, Martin Ryerson commissioned a six-story store and factory at 318 W. Adams Street, which was leased to Keith Brothers & Company. The three Keith brothers, Edson, Elbridge, and O. R., lived at 1906, 1900, and 1808 S. Prairie Avenue, respectively. The six-story brick building also featured dominant vertical piers, but this time with cast iron spandrels in between and an ornamental parapet. It was razed in 1928.

By chance, the local building that most reflected Sullivan’s interest in the work of Henry Hobson Richardson was designed in 1887, the year that Glessner house was completed. This was the clubhouse for the Standard Club, a prominent German-Jewish organization of which Dankmar Adler was a member. The Richardsonian Romanesque styled building was erected at 2400 S. Michigan Avenue and opened in late 1888. The four-story building was faced in heavy rusticated Bedford limestone, the wood trim painted in a corresponding gray color to increase the powerful feeling of the exterior. The main entrance was centered on the symmetrical Michigan Avenue façade, whereas the long side of the building facing 24th Street featured an irregular fenestration reflecting the spaces within which included parlors, dining rooms, library, billiard room, and a huge 6,000 square foot two-story auditorium/ballroom. 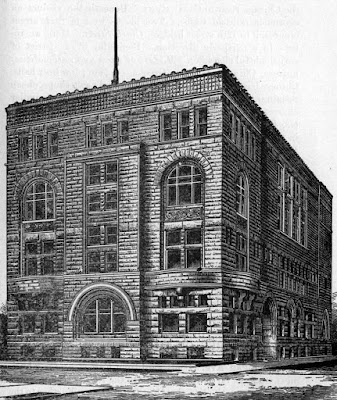 Attorney Wirt Dexter, a long-time resident of 1721 S. Prairie Avenue, hired Adler & Sullivan to design a commercial loft building as investment property in 1887. Leased to the furniture manufacturer R. Deimel & Brothers, the six-story structure at 630 S. Wabash Avenue was similar in construction to the Selz, Schwab & Company and Keith Brothers & Company buildings. An interesting feature was the use of exposed perforated cast-iron girders running vertically up the back side of the building, reducing the width of the masonry piers and opening more of the wall surface for windows. The building was designated a Chicago landmark in 1996 but was destroyed in a devastating fire in October 2006. 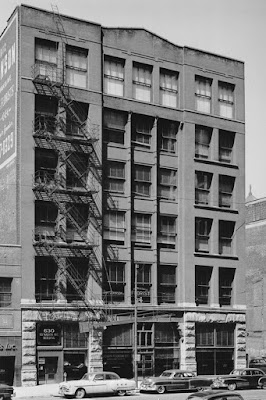 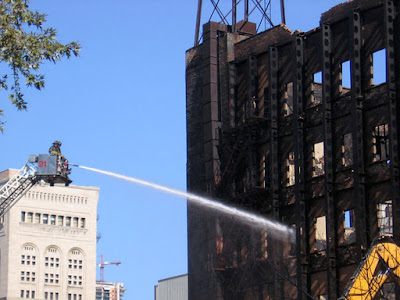 In 1889, Dexter asked Adler & Sullivan to design a large front addition to his Prairie Avenue home. Notices indicated it was to have a façade of rock-faced stone, so it might have been planned in the Richardsonian Romanesque style. For reasons unknown, the project was not built, and Dexter hired the Boston architect Arthur Little to design what became an early and influential structure in the Colonial Revival style.

Max A. Meyer was another partner in the firm of Selz, Schwab & Company, and commissioned Burnham & Root to design his home at 2009 S. Prairie Avenue which was completed shortly before his death in 1888. Four years later, his estate commissioned Adler & Sullivan to design a large commercial loft building at the southwest corner of Van Buren and Franklin. At least two plans were prepared, the simpler one ultimately being selected which featured broad bands of windows giving the building a strong horizontal emphasis. 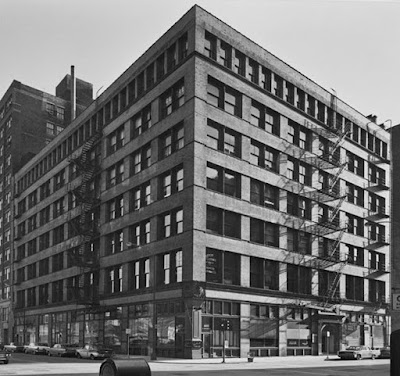 The recessed corner entrance featured a stocky single column surmounted by a huge ornamental terra cotta block, the only decoration on the building other than the elaborate cornice. It was razed in 1968. 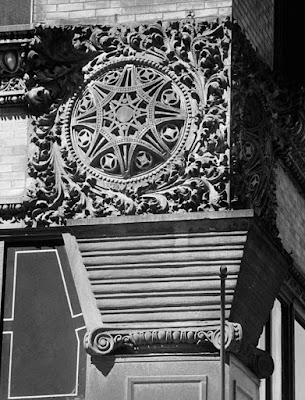 The last two projects in the neighborhood were both planned in anticipation of the World’s Columbian Exposition of 1893. The Standard Club acquired the two houses immediately to the south of their building, which Adler & Sullivan redesigned and extended up to the sidewalk. A huge two-story arcade of five arches, reminiscent of the front wall of the Sinai Temple sanctuary, was elaborately decorated with staff plaster (the same material used on the Exposition buildings). Card rooms, kitchens, and servants’ quarters occupied the new building, which was demolished in 1905 for a new addition by Dankmar Adler’s son Abraham, in association with Samuel A. Treat. The entire Club complex was demolished after the Standard Club moved to new headquarters downtown in 1926. 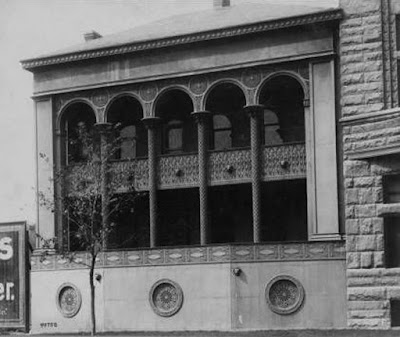 The massive First Regiment Armory, designed by Burnham & Root, was completed in 1891 at the northwest corner of Michigan Avenue and 16th Street. Florenz Ziegfeld rented the building in early 1893 and hired Adler & Sullivan to convert the drill hall into a temporary concert venue with large stage and restaurant. To be known as the Trocadero, it was destroyed by fire in April 1893, one week before it was due to open. No photos or drawings of the interior are known to exist. 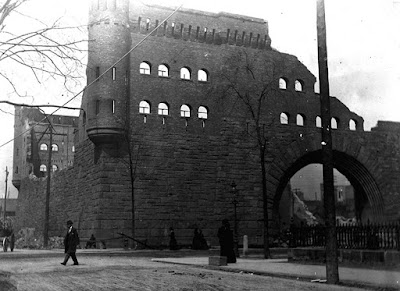 
Sullivan’s connections to the Prairie Avenue neighborhood were numerous but sadly none of the projects described stand today, although many were thoroughly documented by photographer Richard Nickel prior to their demolition.

The Glessners were good friends with several Chicago architects, especially Daniel Burnham, but there is no indication they knew Sullivan. Although it is highly likely that he visited the Glessner house during construction, given his interest in the work of Richardson, the only mention of Sullivan is found in a journal entry by Frances Glessner dated April 27, 1905:

“Thursday afternoon I went to the Fortnightly. Harriet Monroe had the paper. Fred Bartlett and Mr. Sullivan the architect both spoke, the latter in execrable taste and spirit.”

(Poet Harriet Monroe and artist Frederic Clay Bartlett were both close friends of Frances Glessner, but clearly Louis Sullivan did not impress.)