In the Chicago periodical, The Economist, of February 15, 1919, there was an article on Louis H. Sullivan. Artist Frank G. Logan had just been awarded a $500 prize for his painting of the famous architect. It then listed some of his most famous building designs, most in partnership with the deceased Dankmar Adler. The article ended by saying “Mr. Sullivan is now in his sixties and has retired from active practice.” That last phrase was somewhat premature. 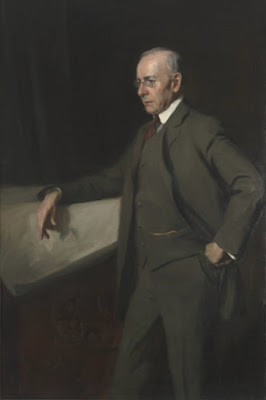 Sullivan’s fortunes (his commissions, finances, and personal life) had been declining steadily since the start of the new century. As this was happening, his practice by apparent necessity transitioned from skyscrapers and grand theaters to the small bank buildings across the Midwest. He was still receiving accolades from around the world, but that renown was not transferring into work in the U.S.

When the 1919 article ran, his last constructed work had been the 1916 Peoples Savings & Loan Association Building in Sidney, Ohio. Then he lost a design competition for a high school in Owatonna, Minnesota in 1917. And the body blows kept coming.

He finally decided to finally divorce his wife, Margaret. They had been married in 1899. She had left him by 1909 and fled to New York City. In August 1916 he filed on the grounds of desertion and the divorce was finalized on January 29, 1917. 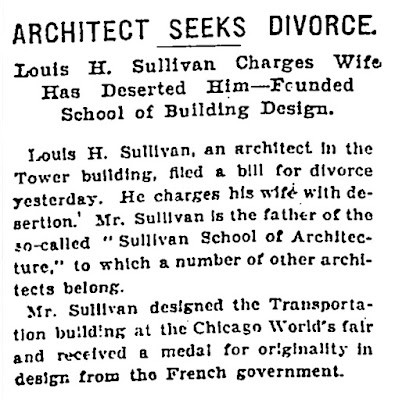 He lost his chief draftsman, Parker Noble Berry, to private practice in the first half of 1917. There was no work to keep him. Then Berry perished on December 16, 1918. The Spanish Flu got him at the age of 30.

A further blow was the loss of office space on the 16th floor of the Auditorium Building’s tower. Adler & Sullivan, Architects had moved into custom offices on the 16th and 17th floors in 1888. From the tower’s vantage point they could view all their downtown. It was where Sullivan trained Frank Lloyd Wright and George Grant Elmslie, among others. He was there until through midyear 1917.

After that, Louis Sullivan spent his remaining work years at two locations on Prairie Avenue, in what is now the Prairie Avenue Historic District. He was provided office space (which may have been no more than a drafting table) at the American Terra Cotta and Ceramic Co.’s sales office at 1808 S. Prairie Avenue. That was arranged through Kristian Schneider of the firm, who had long been the modeler for Sullivan’s ornamentation. 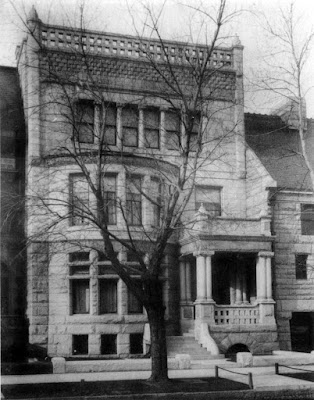 As Spring 1919 began, things turned for the better for Sullivan. Two commissions came his way. The first was a remodel of the First National Bank of Manistique Building in Michigan, for which he created drawings in May. The second was announced in June. It was for a new Farmers and Merchants Union Bank Building in Columbus, Wisconsin. 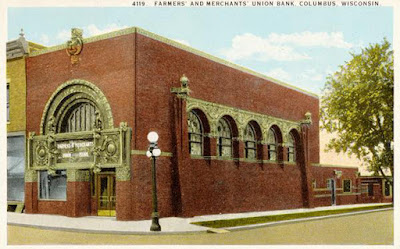 The Columbus work would keep him busy into early 1920. Sullivan was so very proud of this design that he called it a “jewel box” and the name stuck and eventually referred to all eight of his bank projects. He had help from draftsman William C. Presto, who was on loan from architect George C. Nimmons’ office. Still, the rest of 1920 must have been an especially somber year.

Entering the final few years of his life Louis Sullivan received only two more building commissions. In 1921 he was asked to design a memorial for the Eddy family in Glenwood Cemetery, Flint, Michigan. Patriarch Arthur Jerome Eddy, a 60-year-old Chicago lawyer, author, art collector and art critic, had died unexpectedly on July 21, 1920 in New York City. In the middle of his partnership with Adler, Sullivan had designed three mausoleums – Ryerson (1889), Getty (1890), and Wainwright (1892) – that were then and still are considered masterpieces. He sketched up not just a tomb but an elaborate, modern enclosure that the family, however, chose not to build.

At the beginning of December 1921, Sullivan announced he moved his architectural office to another old Chicago mansion at 1701 S. Prairie Avenue. Actually, American Terra Cotta’s move there necessitated him to follow.

The house had been designed by William Le Baron Jenney in 1868 for William Hibbard, partner in the wholesale hardware firm of Hibbard, Spencer, Bartlett & Co. (remembered today for its “True Value” brand name). 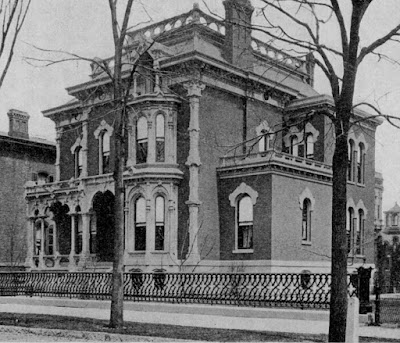 Sullivan’s last realized design was completed there. It was not an entire building, but only a façade. This time it was William Presto who hired Sullivan for his decorative abilities. The project was the William P. Krause Music Store & Flat at 4611 N. Lincoln Avenue in Chicago. Of course, Schneider would model all of Sullivan’s terra cotta. 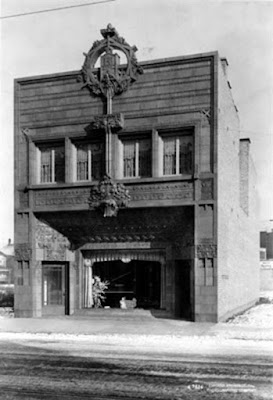 He had no more “office” from then on. In his “spare” time he wrote. Sullivan’s autobiography, written in the third person and oddly titled The Autobiography of an Idea, was published posthumously in 1926. His writings included another book, Democracy: A Man-Search, that was finally published in 1961. He prepared sketches for a monument for the National Terra Cotta Society in 1921 and again in 1923, though nothing was ever built.

By now in failing health, he found the energy to draw 20 full-page plates of fanciful architectural details that went into his book, A System of Architectural Ornament, According with a Philosophy of Man’s Powers, published by the American Institute of Architects just before his death in April 1924.

“All of Mr. Sullivan’s possessions are sealed up in boxes in the possession of Mr. Albert Sheffield, c/o American Terra Cotta Company, 1701 Prairie Avenue, Chicago, and can be gone over by any properly authorized individual.”

Guest author:
Michael N. Plei is a national civil engineer who started a hobby over six years ago to trace Adler & Sullivan's work and its connection to the history of Chicago.