In last week’s article, we looked at events during the first half of the 19th century that laid the groundwork for the six blocks of Prairie Avenue, between 16th Street and Cermak Road, to evolve as an upper-class residential street. This week we will explore the first houses erected during the 1850s and learn a bit about the people who built them. 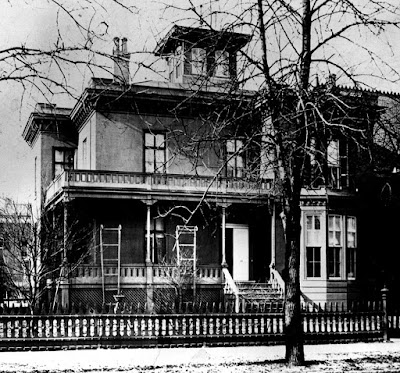 The first house on Prairie Avenue was constructed for John Nichols Staples. Born in Connecticut in 1809, he had lived for many years in Natchez, Mississippi with his wife and children. He came to Chicago in 1853 where he established himself as a real estate agent and stockbroker in the firm of Staples & Sim.

In March 1853, he purchased a large lot on the west side of Prairie Avenue with 284 feet of frontage facing Lake Michigan. Soon after, he began construction on his home, an imposing brick structure designed in the Italianate style prevalent at the time. It was said to have been the first brick house constructed in Chicago south of 16th Street. As was the case with several of the early houses on Prairie Avenue, it featured a prominent central cupola or observatory, which at the time would have provided unobstructed views for miles in all directions. Another noteworthy feature was the unusually tall windows which provided easy access to the two-story wrap around porch, no doubt a delightful place to sit on a warm summer evening to enjoy the breezes off of the lake just a few hundred feet to the east.

LATER HISTORY: In the 1850s and 1860s, Staples sold off portions of his lot for the construction of three additional houses. In 1878, he sold his own home to Turlington W. Harvey, who significantly remodeled and enlarged the house two years later in the Second Empire style. It was acquired by John and Frances Glessner in 1899 and razed to make way for new townhouses for their children.

After Staples left Prairie Avenue, he moved to a new home at 3 Campbell Park, a small enclave of houses on the west side, north of Polk Street and east of Western Avenue. He died in 1898 at the age of 89 and was interred at Graceland Cemetery. Campbell Park Drive still exists today, minus the homes, and forms part of the Chicago Technology Park within the Illinois Medical District. 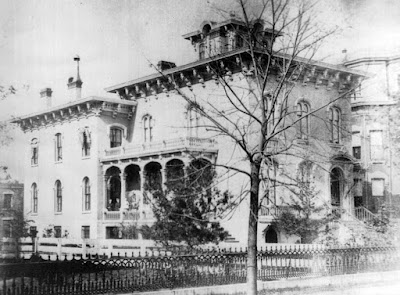 Prairie Avenue’s second home was constructed for Samuel Barber Pomeroy. Born in 1828, he was a native of Massachusetts and came to Chicago in the early 1850s with his older brother Eleazer to establish a commission house, known as S. B. Pomeroy & Co. The brothers owned a large business block on the north side of the city, in addition to several grain elevators, dock property, and three grain-carrying vessels on the Great Lakes, one of which was named “S. B. Pomeroy.” They were both prominently connected with the Chicago Board of Trade.

In 1854, Pomeroy married Marion Hilliard and purchased his property on the west side of the 1800 block of Prairie Avenue. He is first listed in the city directory at his new Prairie Avenue home in 1858. The house was in the Italianate style, like the Staples house, but was more exuberant, featuring an elaborate bracketed cornice, front and side porches, and a large cupola.

LATER HISTORY: Pomeroy sold the house in 1863 to wholesale grocer Henry Hinsdale who sold it a few years later to fur dealer James Smith. In 1880, it was purchased by George B. Marsh and soon after received an entirely new stone façade. It was demolished in the 1940s. 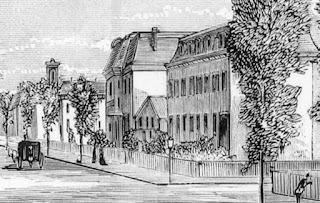 Soon after the completion of the Pomeroy house, a pair of houses was constructed just to the north at the southwest corner of Prairie Avenue and 18th Street. The north (corner) house was built for Dr. Horatio Hitchcock who had acquired his property in 1856. The house to its south was built for Andrew Jackson Galloway who purchased his property in 1858, just before construction began.

Horatio Hitchcock was born in New York in 1814 and came west to Will County in 1840. He moved to Chicago in 1849, making him one of the earliest physicians in the city, and he was remembered for his work among the cholera victims through the 1850s. He died in his Prairie Avenue home in January 1880 and was interred at Oak Woods Cemetery.

Andrew Jackson Galloway was also born in 1814 but in Pennsylvania, although he grew to adulthood in the new state of Indiana where his family moved when he was six. After receiving a degree in civil engineering, he came to Illinois and was involved with some of the earliest work on constructing railroad lines in the state, as well as the Illinois & Michigan Canal. He came to Chicago in 1849 and two years later was appointed assistant engineer of the Illinois Central Railroad, overseeing acquisition and management of over one million acres of land and the construction of the railroad tracks.  He retired from the Illinois Central in 1855 and opened a real estate office in Chicago, A. J. Galloway and Co. He moved from Prairie Avenue in the early 1880s and spent his final years in a home at 7600 S. Emerald Avenue, where he died in 1903. Like his neighbor, he was interred at Oak Woods Cemetery. 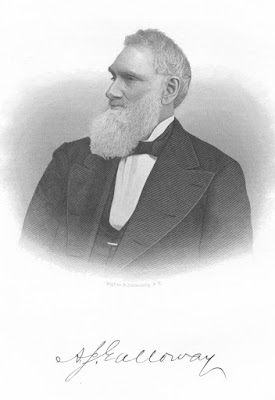 The double houses constructed for Hitchcock and Galloway were typical attached houses of the period in the Second Empire style, sporting a Mansard roof at the third story. There are no known photographs of the house, only the sketch shown above, which was drawn in 1874.

LATER HISTORY: In 1885, John and Frances Glessner purchased the Hitchcock house; soon after, O. R. Keith purchased the Galloway house. In 1886, the buildings, not yet thirty years old, were torn down for new houses. It is interesting to note that the footprint of the Hitchcock house was quite a bit south of 18th Street; as such it would have stood largely in what is now the courtyard of the Glessner house. The O. R. Keith house, designed by Cobb & Frost, was razed in 1968.

It is believed that the four houses described above were the only ones completed on Prairie Avenue during the 1850s. They were all situated on the west side of street to face toward the lake, the shoreline of which was cut off by the newly laid Illinois Central Railroad tracks.

In those early days, the houses were not identified by address. An early listing for Andrew Galloway, for example, simply listed his home as being on Prairie Avenue, two doors south of Old (the original name for 18th Street). Street numbering was initiated in the 1860s using a different convention that was then replaced by the current numbering system in 1880.

One block to the west, the first house on Indiana was completed in 1855 for Jason Gurley. He was born in Vermont in 1807 and came to Chicago on an exploratory visit in 1833, the year Chicago was incorporated as a town with a population of only 300 residents. After spending a few years in Ottawa, Illinois, he came to Chicago in 1837 to take up management of the Mansion House Hotel. He went into the real estate business where he made his fortune. In 1851, he constructed Metropolitan Hall at the northwest corner of Randolph and LaSalle, described as the “largest and most pretentious public-room in the city at the time of its erection.”  Among his real estate holdings was a large tract of land which he subdivided in 1856 as Gurley’s Subdivision; today it includes the 2100 blocks of State, Wabash, Michigan, Indiana, Prairie, and Calumet.

There are no known photos of the Gurley house, which stood at approximately 1906 S. Indiana Avenue, however a description of the house in the June 25, 1855 Chicago Tribune provides a detailed account of its construction and appearance:

“A frame dwelling house, two stories high, on Indiana avenue, for Jason Gurley, Esq. The design is for an Italian villa and is to be built in every particular in the most complete manner. The building is to be brick lined between the framework . . . A very handsome observatory is intended to adorn the building, which will command a wide and expansive view of the lake and prairie. The design is by Mr. Boyington; J. M. & E. Price, masons; McWilliams & Grannis, carpenters. The cost of this building will be about $10,000; and it will be completed this fall.”

The mention of the brick lining between the framework is a reference to what was known in the 19th century as brick insulation or brick nogging. This technique was often used in balloon-frame houses where the exterior clapboards were simply nailed on to the studs. The void between the clapboards and the interior plaster walls could make the house cold in the winter, thus the brick served as insulation and an early form of fireproofing. The bricks were not structural. 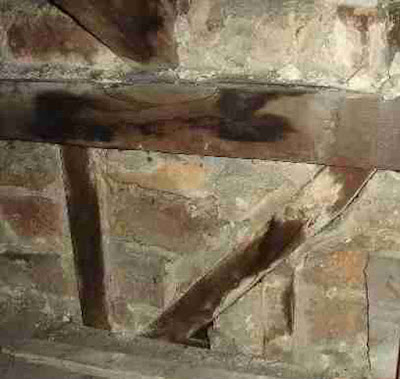 An example of brick nogging

Gurley and his wife Selina had no children, but he was very close with his three nieces who married the three Keith brothers, all of whom eventually built substantial homes on Prairie Avenue (including the O. R. Keith house referenced above). He moved to Palatine during the Civil War while Edson and Susan Keith took up residence in his former Indiana Avenue home. Gurley returned to their home and died there in April 1865 at the age of 59; he was interred at Graceland Cemetery.

In next week’s installment, we will look at the very different development of Prairie Avenue south of Ringgold Place (now Cermak Road) as well as the few additional homes built in the area during the years of the Civil War.