The Early History of Prairie Avenue - Part I

The heyday of Prairie Avenue as Chicago’s most exclusive residential street is generally framed by the dates of the Great Chicago Fire in October 1871 and the turn of the twentieth century. The history of the area, however, goes back much further, predating the subdivision of the land between present day 16th Street and Cermak Road in the 1850s. In this first article examining Prairie Avenue’s early history, we will look at the events that set the stage for the construction of the first house in 1853.

The earliest history of Prairie Avenue is tied to Fort Dearborn, which was located nearly three miles to the north along the Chicago River at what is now Michigan Avenue. During the War of 1812 with Great Britain, the soldiers and civilians at the fort were ordered to evacuate for the safety of Fort Wayne in the Indiana Territory. On August 15, 1812, the party left the fort, traveling south along the shore of Lake Michigan, which was much closer to the future location of Prairie Avenue than it is today. Upon arriving at approximately 18th Street, a brief battle took place with the native Potawatomi who were attempting to preserve their ancestral lands. There were many casualties on both sides and Fort Dearborn was burned soon after.

A cottonwood tree standing at the time of the battle became a symbol of the event. It stood on the north side of 18th Street east of Prairie Avenue until it was felled during a storm in May 1894. The illustration below shows the tree in the 1880s, with the coach house of the George Pullman house visible at left. It also clearly shows that Prairie Avenue was most definitely lake front property. 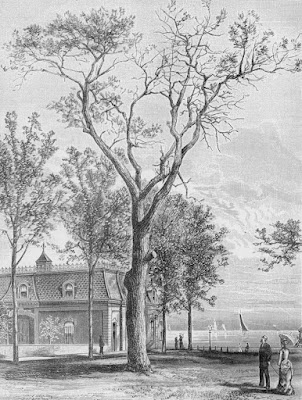 In 1833, Dr. Elijah Harmon, the second person to establish a medical practice in the town, purchased 138.24 acres of land from the U.S. government, paying the standard rate of $1.25 per acre. He built a modest cabin on his property, which extended from the present boundaries of 16th Street on the north to Cermak Road on the south, and from State Street on the west to the shore of Lake Michigan on the east. 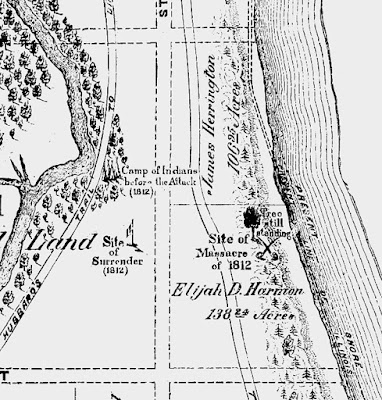 “Instead of a flourishing village, the Chicago pioneer found mud, swamp holes, and hogs. Coyotes and prairie dogs swarmed everywhere . . .Two blocks away on Michigan avenue, where the steeple of the Second Presbyterian Church stands high in the air, Mr. Cobb remembered that he once waded through a swamp hole and figured that the ground never would amount to anything, even for farming.”

Harmon moved to Texas in 1834 and the next year, Henry and Caroline Clarke purchased the northernmost 20 acres of his tract, paying $100 per acre, an excellent return for Harmon on his investment. In 1836, the Clarkes built their Greek Revival home, which survives today as the Clarke House Museum at 1827 S. Indiana Avenue. In 1837, the city of Chicago was organized, and present day Cermak Road was established as the southern boundary of the city, making Clarke House the oldest surviving building within the original city limits. Despite being part of the city, Clarke House sat isolated in the country, well over a mile south of the nearest building. Residents of the city would drive out on Sundays along an old Native American path (now Michigan Avenue), to see the majestic house set amongst the scrubby landscape by the lake. 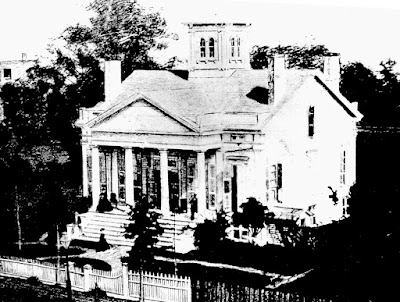 The Clarkes remained largely isolated through the 1840s. Their only immediate neighbors were the dearly departed. In 1833, sixteen acres of land had been acquired for a municipal town cemetery, reserved for Catholic burials. The present boundaries of that cemetery would be Cermak Road on the north, 23rd Street on the south, Prairie Avenue on the west, and the lakeshore on the east. (Today that site is occupied by the Hyatt Regency McCormick Place and portions of the convention center). The cemetery operated until 1847, when all the bodies were supposedly relocated to the city cemetery in present day Lincoln Park. As late as 1897, however, bodies were still being found when construction was underway for new buildings.

In 1849, a devastating cholera epidemic swept through Chicago, which led to the founding of the Chicago Orphan Asylum. This charitable institution provided relief for the many afflicted immigrants who left behind children, but no family or financial structure to support them. In 1854, the Asylum completed its new building at 2228 S. Michigan Avenue.  By the time it moved to larger quarters at South Park Avenue and 51st Street in 1899, it was estimated that more than 6,000 children had been served by the institution.  (The new building, located at 5120 S. King Drive, was designated a Chicago landmark in 2009). 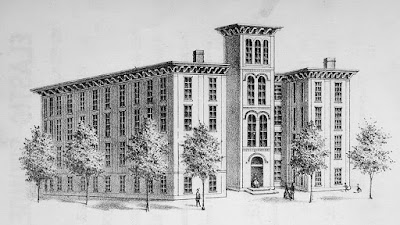 The cholera epidemic also claimed the life of Henry Clarke, leaving his widow with six children and a house that had never been completed. In 1850, Caroline Clarke subdivided 17 acres of her land, retaining only a 3-acre parcel around the house, which sat on the east side of Michigan Avenue. Clarke’s Addition to Chicago was created in anticipation of the continued growth of the city to the south, evidenced by the extension of Michigan Avenue beyond the Clarke property and the daily trips of the State Street stagecoach south to the city limits.

Ironically, this subdivision marked the beginning of Prairie Avenue, but Prairie Avenue did not exist in the subdivision. Due to the proximity of the lake, the lots along the east side of Indiana Avenue were simply extended east to the lake shore. It was not until after the Civil War that this block was subdivided yet again, inserting the 1600 block of Prairie Avenue, and configuring the lots as we know them today.

Another important event at this same time was the chartering of the Illinois Central Railroad, which took place in 1851. The railroad reached an agreement with the city to run its tracks along the shore of Lake Michigan, viewed as a practical way to preserve the shoreline. The Illinois Central was the longest railroad in the world when it was completed in 1856. The main line extended from Cairo to Galena, but a branch line extended from Centralia (named for the railroad) to Chicago. Three trains daily ran between downtown Chicago and Hyde Park, providing easy transportation in and out of the city. (It survives today as the Metra Electric Line, with a station at 18th Street). 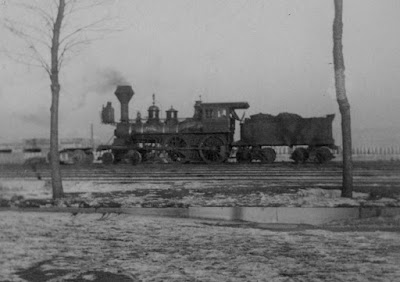 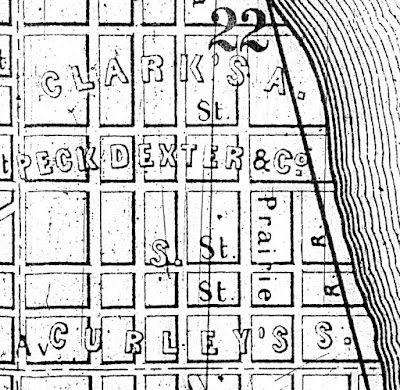 During the 1850s, several new subdivisions were laid out south of Caroline Clarke’s property, as investors purchased land in anticipation of development and rapidly increasing land values. In 1853, the southern boundary of the city was extended to 31st Street. All the pieces were now in place for the first residents to purchase lots and build their homes. In next week’s article, we will look at those neighborhood “pioneers” and the houses they built.