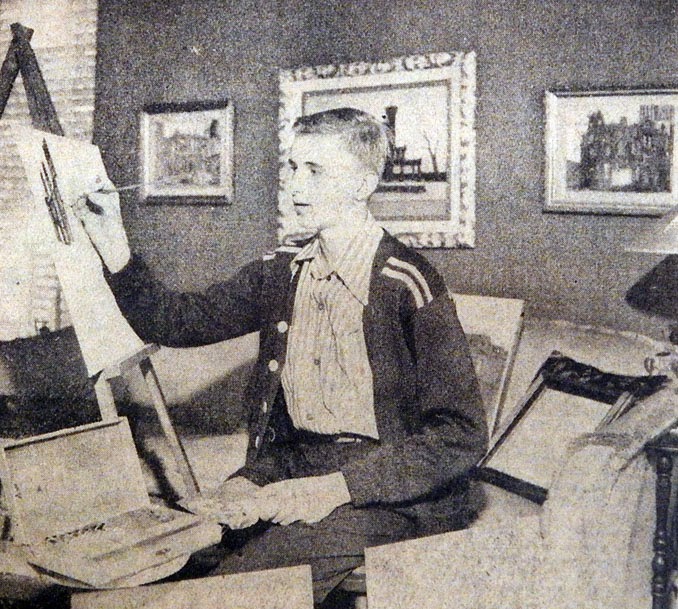 "Jack Simmerling Jr., Blue Island, works on one of the
many paintings he has done of old Chicago houses."
(Tribune photo by William C. Loewe)

In anticipation of the opening of the John J. ‘Jack’ Simmerling Gallery of Prairie Avenue History on Monday December 1, 2014, we look back 63 years to 1951, when Jack Simmerling was just 15 years old.  On October 14, 1951, the Chicago Sunday Tribune ran a cover story about Jack in their Neighborhood Section.  The article included the photo shown above, photos of seven of Jack’s paintings (two of which will be displayed in the new gallery), and a lengthy article, reprinted below.  It is most interesting to note how fully developed Jack’s passion for old houses was at this young age, and what a prolific artist he had already become.

NOTE:  Due to overwhelming response, the opening celebration on December 1st is now sold out.  However, special one-hour tours of the Simmerling Gallery will be offered at 10:00am on the following Saturdays – December 13, 20, and 27.  Tickets are $10.00 and prepaid reservations to 312-326-1480 are required as group size is limited to 15.  Additional tours will be scheduled in 2015, check the website, www.glessnerhouse.org for more details.

On first meeting Jack Simmerling Jr. of Blue Island it is not easy to believe that he is becoming an authority on the Victorian era.  Jack is 15, likes to swim and fish, and his favorite article of apparel is his Blue Island High school sweater.

One usually associates those whose interests are steeped in the ‘90s with museum curators or sentimental old timers who wistfully remember the lush way of life.  But in the last two years this high school youth has been making a study of Victorian life and architecture in Chicago.

Jack’s interest in the era began when he and his mother visited the famed Potter Palmer estate in Lake Shore dr. just before it was razed to make way for an apartment building.  “I was tremendously impressed by the splendor of the old castle and felt that paintings of the structure should be made.”

Jack, who has painted since he was able to hold a brush – he won a first award in a state contest sponsored by the Illinois Federation of Women’s Clubs in 1948 – began to reproduce the building on canvas.  He spent many days at the Lake Shore dr. site making sketches.  His project, so far as the Potter Palmer mansion was concerned, was not limited to one picture.

Jack has a series of five paintings which show stages of the castle’s demolition.  His interest in old homes, whetted by the Potter Palmer house, made him move on to the Cyrus McCormick mansion in nearby Rush Street.  “In order to obtain the true color of the building and even preserve some of it, I pulverized some bricks from the house and mixed the dust with my paint,” Jack said.

Since then Jack has painted dozens of old Chicago homes.  Many of the paintings have been done from photographs of houses which have been razed; others have been painted from the homes themselves.

Jack, who recently began lecturing on the subject of old Chicago homes, tells his audiences that in almost all cases his paintings are his own impressions of how these homes appeared in the days of lavish parties and posh living.  “When I am able to paint from the actual house it is usually in a state of disrepair and I have to put in what I feel the house actually looked like,” he said.

While his paintings lack the preciseness of an architect’s rendering, Jack has done painstaking research on the houses so his reproductions will resemble as much as possible the originals.

He can talk about the famed Mikado ball held before the turn of the century in the Marshall Field home in Prairie av. with as much authority as he can discuss the architecture of the period.  His interest in the houses has branched off into a study of their interiors and he is now working on a cardboard model of the rooms of the McCormick house complete with chandeliers, inlaid floors, and hand carved mantels.

“I can’t tell you the number of days he has spent roaming around that house,” his mother said.

Jack also haunts old homes being razed.  Wrecking crews have become accustomed to his requests for stained glass windows, mantelpieces, and other items.  The Simmerling basement is becoming cluttered with such objects.

The young artist plans to take some courses at the Art Institute soon, and after high school he hopes to go on to the University of Chicago.  “I am not sure what I want to do eventually,” he said.  “Right now I think I would like to be a newspaper reporter.”

Fortunately for all of us, Jack soon abandoned his idea of becoming a newspaper reporter (although he remained an incredible storyteller), devoting his full efforts to become an accomplished and, in time, nationally-recognized artist.  The new Simmerling Gallery at Glessner House Museum will showcase selected artworks in oil, watercolor and pen and ink, along with architectural fragments from some of the great homes of Prairie Avenue, personally salvaged by Jack Simmerling in his quest to preserve the Victorian era he saw rapidly disappearing before his eyes.
Posted by Glessner House Museum at 7:03 PM