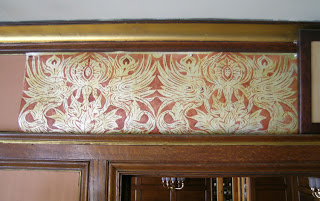 A major element in the restoration of the parlor is the recreation of the elaborate hand-stenciled burlap wall covering created by William Pretyman.  Since 1991, a sample of the wall covering has been in place over the doorway leading from the parlor to the dining room.  The sample was created by The Grammar of Ornament, the Denver-based company now recreating the actual wall covering.  It is based on an intact section found behind the broad back plate of the wall sconce on the north wall.  Since that section had never been exposed to sunlight, the colors were perfectly preserved.
When the first sample was created in 1991, technology was limited in terms of “reading” the complex wall covering, which featured various layers of paint, glazes, Dutch gold, and more.  As such, the sample on view through the years is actually a bit rough compared to what the Glessners had in place.  As preparations were made for the new wall covering this year, advanced technology allowed for a much more thorough analysis of exactly what Pretyman created.  Combining these findings with historic photographs showing the entire room, Ken Miller of The Grammar of Ornament was able to identify specific features within the design including birds, flowers, and foliage which bear a striking resemblance to William Morris designs found elsewhere within the house.  In addition, the exact composition of the layers was determined, thus an extremely accurate reproduction will result.
When the Glessners first moved into their completed Prairie Avenue home in 1887, the parlor featured floral wallpaper in various shades of yellow and gold.  For reasons unknown, within five years they decided to remove that paper and redecorate the room.  France Glessner’s journal entry for indicates that “Mr. Prettyman (sic) called yesterday afternoon to consult about paper for the rooms.”
A few things were learned about Pretyman’s process when the original wall covering was removed last week.  (The original panels have been carefully stored should technology become available in the future allowing the subsequent layers of paint to be removed without damaging Pretyman’s original design).  For one, it was determined that each section of wall was covered with a single piece of burlap, including the large unbroken north wall which measures nearly 7 by 19 feet.  (A penciled notation of the north wall indicates the exact length of this piece 18 feet, 8-1/2 inches).  In addition it was learned that the paste used to adhere the burlap to the wall was apparently not sufficient to keep the burlap stable, so hundreds and hundreds of small brads were nailed through the burlap into the wall to keep it in place.  (The removal of all these brads proved to be a slow and arduous task).  The brads were found around all the edges of the wall covering, and were randomly found throughout the panels as well.  Since the brads were clearly installed under the layers of paint, it was determined that Pretyman completed all of his design work on site, starting with the raw burlap and adding all the subsequent layers, rather than completing all of some of the work off site at his studio.  Gold leaf was also added to the bead trim around each panel giving it a finished look.  That small but important element is being recreated this week by another craftsman.
Pretyman had a fascinating career, and designed a number of significant interiors in before returning to his native in the 1890s.  As part of the dedication of the restored parlor on Friday October 14, museum docent John Waters will present a look at the life and career of this important but largely forgotten designer.   Since all of his other commissions have been lost, the parlor wall covering will serve as the only surviving link to Pretyman’s years in .
Next week:   The William Morris draperies
Posted by Glessner House Museum at 4:58 PM No comments:

Email ThisBlogThis!Share to TwitterShare to FacebookShare to Pinterest
Labels: John Waters, The Grammar of Ornament, The Story of a House, William Morris, William Pretyman 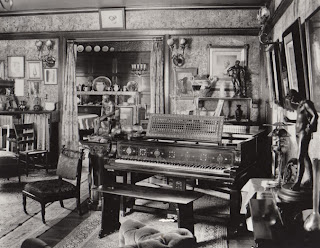 Today marks an important milestone in the history of – the start of the long-anticipated restoration of the parlor.  This project has been planned for twenty years and dates back to 1991, when a sample of the hand-stenciled wall covering (on display in the room since that time) was first produced.  Reproduction of the intricate wall covering was very expensive, so the project was put on hold until funds could become available.
In June 2009 the museum lost one of its most ardent supporters and valued docents – Aileen Mandel.  Aileen was passionate about the restoration of the parlor and her family graciously directed memorial gifts to the project.  In May 2010, another long time supporter of the museum and one of its original docents – Bunny Selig – passed away, leaving a generous bequest to the museum which allowed the project to move ahead full force.  Additional funding was provided through a grant from the Richard H. Driehaus Foundation, and gifts in memory of Bunny.
In addition to the recreation of the wallcovering, funds will be used to reproduce the original William Morris drapes and portieres, rebuild the long-lost banquette, and recreate other missing details.  The room will also be reconfigured to more closely match the floor plan used by the Glessners.  Articles in the coming weeks will focus on specific elements of the restoration.
The dedication of the restored parlor will take place on Friday October 14 beginning at 6:00pm with a reception in the coach house.  Representatives of both Aileen’s and Bunny’s family will be present as we at long last open the doors to an extraordinary room – a true jewel box space within the museum.  A special treat for the evening will be a presentation by architect, historian, and docent John Waters who will provide a fascinating look at William Pretyman, a significant but largely forgotten decorator who produced the original wallcovering, as well as interiors for a number of significant homes and buildings in .
Next week:  The Pretyman wall covering
Posted by Glessner House Museum at 4:46 PM No comments: 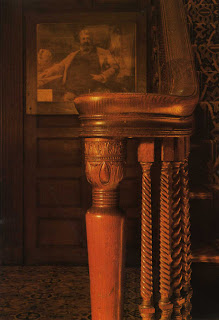 The main staircase of Glessner house is a major design element of the interior of the house, however its delicate detailing stood in stark contrast to the elaborate and intricate staircases found in many of the Prairie Avenue mansions of the period.  For the Glessner stair, H. H. Richardson looked back to the Colonial period for inspiration.  Such Colonial Revival details became fashionable at the time of the centennial of the in 1876, and frequently used them in his designs.  Dentil mouldings, fluted pilasters, and the configuration of fireplaces, are just some of the examples seen in Glessner house.
For the Glessner staircase, utilized a slender turned newel post of quarter-sawn oak.  The simple post tapers upward above which is found a delicately carved section featuring several motifs including acanthus leaves and a bead trim.  The top of the newel serves as the start of the handrail which makes a graceful turn as it heads up the staircase.  Beyond, the turned balusters are carved in five different designs, repeated once on each step.  The idea for the alternating balusters came from the Henry Wadsworth Longfellow house, a home that the Glessners visited when meeting with at his office.  Many years later, John Glessner recalled that the balusters cost $1.00 a piece to produce!
For those with an interest in learning more about the history and design of newel posts, Rolf Achilles, president of the board, has just co-curated an exhibit of newel posts at the Brauer Museum of Art at in .  “The Art of the Newel” features more than 80 stunning newel posts from the collection of Jay W. Christopher.  Running through , the exhibit is co-curated by Erika A. Lusthoff with the assistance of Brauer Museum of Art Director/Curator Gregg Hertzlieb.  This is the first known exhibit of its kind to focus on this specific architectural element and the assemblage is most impressive.  Posts produced from the 1880s to the 1920s represent the Italianate, , New Gothic (Gothic Revival), and Renaissance Revival styles.  Although many appear to be hand-carved, most are in fact machine made, a reflection of the advances in technology during the mid- to late-19th century.  As such, many of the posts on exhibit were mass-produced, making them affordable to a growing middle-class.
Complementing the exhibit are period architectural catalogs and plates illustrating additional newels and their incorporation into full staircase designs.  As a whole, the collection is an excellent way to view the changing tastes and styles of the period represented, as newel posts were frequently one of the most elaborate elements in the design of a house. 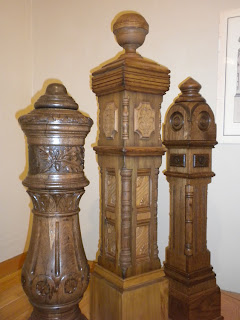 For further information on the exhibit:
of Art
http://www.valpo.edu/artmuseum/events/index.php
Posted by Glessner House Museum at 12:23 PM No comments: