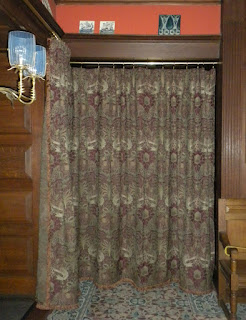 The main hall at has undergone restoration work during the summer, which was unveiled to the public on .  The major components of the restoration are the recreation of the portieres and draperies and the modification of the reproduction light fixtures. 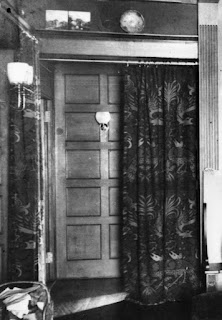 Historic photos show that the main hall featured portieres and draperies in the “Peacock and Dragon” design by William Morris.  Frances Glessner records selecting the fabric in a journal entry dated  while she was visiting Marshall Field’s with Charles Coolidge, one of the architects who oversaw the completion of the house after the death of H. H. Richardson.  The “Peacock and Dragon” design was a bold pattern featuring alternating pairs of peacocks and dragon set amongst a lush and detailed background.  The woven woolen fabric was created by Morris in 1878 and was available in several colorways.  The modern reproduction, made by Sanderson, is exactly like the original except that the pattern is not as large, the original having a repeat measuring 43 by 35.5 inches. 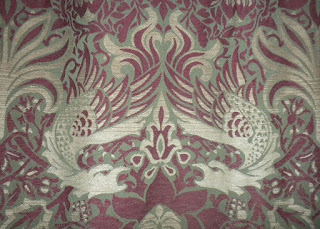 The portieres are hung on both parlor doors, the doorway to the library, and the doorway leading to the master bedroom hallway.  Most importantly, a large panel conceals the doorways leading to the guest bathroom and servants’ hallway at the north end of the hall, which would have always been kept from view.  Single panels are also hung on each of the two windows flanking the curved door.  Brass rods, brackets, and drapery rings, matching the originals in scale and design were made for all openings. 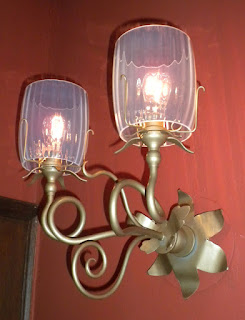 The wall sconces, which are reproductions made in the 1970s, have been retrofitted with “spider” brackets to accommodate the proper glass shades.  These shades, made in the 1980s by the Salviatti & Company studios in , replicate the original “Murano” glass shades with their simple striped design on broad cylinders.  They match the shades found in the parlor, and have been in storage awaiting installation for thirty years.  In addition, the second floor sconces were reworked by recreating the beautiful six petal back plates and additional two petal detail on the stem.  All fixtures were repainted and repaired as needed.

The hall now conveys more of the “cozy” feeling that the Glessners specifically asked for when discussing the design of the house.  The lush fabric makes the space seem more intimate and quiet, and helps relieve the repetition of the oak wall paneling which surrounds the room.

In coming months, additional work in the main hall will include the installation of a reproduction of the original William Morris Lily carpeting on the main stairs leading up from the front entrance and additional work on the first and second floor carpeting.

The projects are being funded by generous gifts to the 125th Anniversary Fund by Allan Vagner, Sandra Danforth, and Robert Furhoff.
Posted by Glessner House Museum at 5:39 PM No comments:

August 15, 2012 to mark bicentennial of the Battle of Fort Dearborn 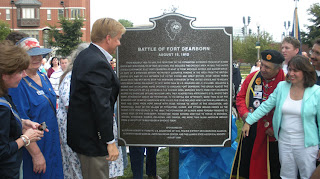 will mark the bicentennial of the Battle of Fort Dearborn, the only battle ever fought on soil.  The event took place on land now occupied by the Prairie Avenue Historic District, with the traditionally-recognized site located on between Prairie and avenues.

The reasons leading up to the battle are complex and involved a young United States, Great Britain, and the various tribal nations east of the Mississippi that had called the area home for hundreds of years.  On Tuesday August 14 at , will host a lecture “Don’t Know Much About the War of 1812?” where the factors behind the battle and the war will be discussed.  The lecture will present the conflict from a Native American perspective and will be given by Frances Hagemann and Barbara Johnson.  Hagemann (Ojibwe/Métis) is a retired at professor and a scholar-in-residence at the Newberry Library.  Johnson is a former teacher, freelance writer, and independent historian focusing on American Indian history.

The Battle of Fort Dearborn, known for most of the past 200 years as the Fort Dearborn Massacre, has been the source of a great deal of controversy for many years.  In the 19th century and for much of the 20th century, the Native Americans who participated in the battle were simply seen as the enemy.  Today, however, there is a much greater understanding of the Potawatomi who were involved in the battle, in light of their desire to preserve their ancestral lands, and the various injustices that were imposed upon them by Americans as the country expanded ever farther west.  Simon Pokagon, the son of a Potawatomi participant in the battle, summed up the controversy when he said “When whites are killed it is a massacre; when Indians are killed, it is a fight.”

In 2009, a more balanced view of the battle was presented to the public, when a small tract of land at the corner of and was dedicated as the Battle of Fort Dearborn Park.  The plaque reads as follows:

From roughly 1620 to 1820, the territory of the Potawatomi extended from what is now to and included the area. In 1803 the government built at what is today and , as part of a strategic effort to protect lucrative trading in the area from the British. During the War of 1812 between the and , some Indian tribes allied with the British to stop the westward expansion of the and to regain lost Indian lands. On , more than 50 soldiers and 41 civilians, including 9 women and 18 children, were ordered to evacuate . This group, almost the entire population of citizens in the area, marched south from along the shoreline of until they reached this approximate site, where they were attacked by about 500 Potawatomi. In the battle and aftermath, more than 60 of the evacuees and 15 Native Americans were killed. The dead included Army Captain William Wells, who had come from with Indians to assist in the evacuation, and Naunongee, Chief of the , Ojibwe and Indians known as the Three Fires Confederacy.  In the 1830s, the Potawatomi of were forcibly removed to lands west of the .  Potawatomi Indian Nations continue to thrive in Michigan, Indiana, Wisconsin, Kansas, and and more than 36,000 American Indians from a variety of tribes reside in today.
August, 2009 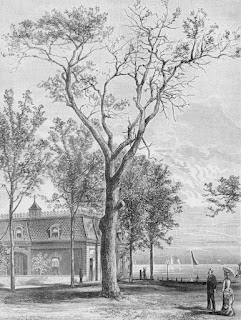 This cottonwood tree, which stood on the north side of , between Prairie and avenues, marked the traditional site of the battle.  The location was identified by Fernando Jones, a pioneer and long-time resident at , who was shown the site by a Native American who had participated in the battle.  Jones later hung a sign on the tree that read, “Cursed be he that removeth the ancient landmarks.” 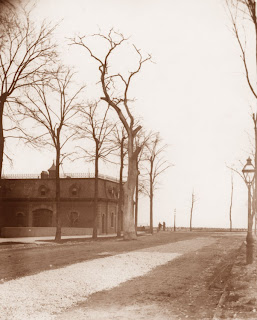 This photo of the tree, taken about 1888 by George Glessner, shows it towards the end of its life.  It was felled during a windstorm on .  Souvenir hunters swarmed the site to retrieve a piece of the relic, but the main section of the trunk was salvaged by George M. Pullman (whose stable is visible at the left) and given to the Chicago Historical Society.

Top photo:  Unveiling of the plaque at the Battle of Fort Dearborn Park, .
Posted by Glessner House Museum at 5:43 PM No comments: 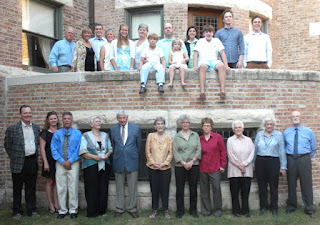 After the initial gathering, family members posed on the curved porch in the courtyard, recreating a classic shot of Mrs. Glessner’s Monday Morning Reading Class taken in 1902.  Dinner and a presentation on John Jacob Glessner followed, and the evening concluded with tours of the museum.

The weekend concluded on Sunday morning with a visit to Graceland Cemetery, where family members visited the final resting place of John and Frances Glessner and their infant son John, along the west shore of Lake Willowmere.

The reunion was one of the most significant events of the 125th anniversary celebration.  In spite of the architectural significance of the house, first and foremost the house was a family home, a place of gathering for generations of the family and their friends.  The warm and cozy interior, a stark contrast to the bold rusticated granite exterior, was a specific request of the Glessners, who wished for their family and friends to always feel welcome when visiting.  A few excerpts from The Story of a House, written by John Glessner in 1923 for his children, give a glimpse of the Glessners’ idea of home:

“This story is addressed to my son, John George Macbeth Glessner, and my daughter, Frances Glessner Lee, for whose pleasure and profit it has been my pleasure and their mother’s to do many things, and especially to give them a happy home and a happy childhood, and to fit them for the responsibilities of living.”

“Mankind is ever seeking its comforts and to achieve its ideals.  The Anglo-Saxon portion of mankind is a home-making, home-loving race.  I think the desire is in us all to receive the family home from the past generation and hand it on to the next with possibly some good mark of our own upon it.  Rarely can this be accomplished in this land of rapid changes.  Families have not held and cannot hold even to the same localities for their homes generation after generation, but we can at least preserve some memory of the old.”

“The description of this home may give some indication of how a man of moderate fortune would live in the latter part of the 19th century and the earlier part of the 20th – an average man with a modicum of this world’s material possessions, but by no means rich, except in family and friends.”

“We have lived with (our possessions) and enjoyed them; they are a part of our lives.  We don’t realize how many they are and how much a part of us they are until we begin to catalogue them in our minds.  We don’t know what we should do without them nor what we can do with them.  The best we can do now is to make this imperfect record, together with these photographs, to perpetuate or at least suggest the spirit of the home.  That home was ever a haven of rest.  It was no easy task to make it so, but it was so made and so kept by the untiring and devoted efforts of your mother.”

(A full reprint of The Story of a House, including the full text and more than sixty illustrations, was produced in 2011 as part of the 125th anniversary celebration and is available for sale in the museum store).
Posted by Glessner House Museum at 5:35 PM No comments: