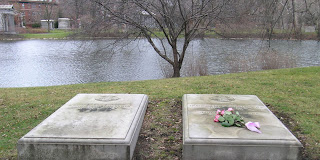 On at 7:00pm, the museum will present a lecture on Chicago's historic by Barbara Lanctot, author of the recently revised A Walk Through Graceland Cemetery.   The following is brief history of the Glessners' plot.
was not the first cemetery that the Glessners selected as their final resting place.  When their infant son John Francis Glessner died on at the age of eight months, the Glessners purchased a plot at .  By the early 1900s however, correspondence from Frances Glessner indicates that they were unhappy with the plot and the condition in which it was kept.  As such, they sought a new location for their burial plot.  was a natural choice.  This was the cemetery of choice for many of their friends and Prairie Avenue neighbors, and they were close friends with several of the officers and board members, including president Bryan Lathrop.
On , the Glessners purchased 2 in the Willowmere Section, along the western shore of .  The lot contained 2,758 square feet and cost $8,274.00.
Frances Glessner died on .  At that time, the remains of her infant son John were exhumed from his grave at Rosehill and placed in her casket.  By early December, John Glessner had selected the Harrison Granite Company to make the memorial stone.  The company, founded in 1845, was based in , but maintained a local office in Room 739 of the Fine Arts Building.  A letter to John Glessner from Harry L. Davis, the company’s resident associate, sheds light on the design of the stone:
“I feel that elements of refinement should enter into the Ledger stone and still retain a quiet dignity, thus to typify the interests of Mrs. Glessner, in life.  A perfectly plain slab would seem to me to depart from the interests in art and architecture which were her’s.”
Another letter, dated December 28, reveals the one and only change made to the original design:
“I appreciate the call of your daughter, Mrs. Lee, upon me today and in accordance with her request I have sent a requisition by Air Mail tonight to our studio to have them prepare symbols of a Celtic character in place of the cross as shown on our presentation sketch.” 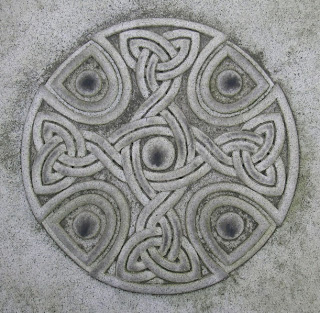 The stone was completed by the beginning of March 1933 and installed later that month.  Made of granite, the total cost, including foundation, was $587.50.  John Glessner was very pleased with the stone, as indicated in a letter from him to Harry Davis dated April 3:
“I went to on Wednesday of last week, to see the memorial stone for Mrs. Glessner set up for me by the Harrison Granite Company.  I was much pleased with the stone and the way it is set.  Its appearance will be still further improved when the grass has been made to grow about it.  The stone seems all right.  (Please do not publish this as a testimonial.)”
By the spring of 1934, John Glessner was pursuing the establishment of a perpetual care fund.  Correspondence from the cemetery indicated that the annual cost of maintenance was $30.00 for a lot of that size which included $10 for mowing, $15 for watering, and $5 for washing the stone.  The fund had not been established by the time John Glessner died on .  (A second matching memorial stone was installed for him later that year).
In May 1937, R. M. Johnson, the executor of the estate of John Glessner, paid the amount of $1,000 to the Trustees of the Graceland Cemetery Improvement Fund for the establishment of a perpetual care fund.  The document further stipulated that no other persons were to be buried in the lot.
Visitors to the Glessner plot today cannot help but be impressed with the beautiful and serene setting of the Glessner plot along , and the simple but elegant design of their stones.
NOTE:  The Glessners’ two other children, John George Macbeth Glessner and Frances Glessner Lee were both interred at the in near the family’s summer estate.  The virtually identical design of their memorial stones would strongly indicate that they were also executed by the Harrison Granite Company, although the symbols used are different - a cross for George and his wife and a honeybee for Frances.
Posted by Glessner House Museum at 10:11 AM No comments: 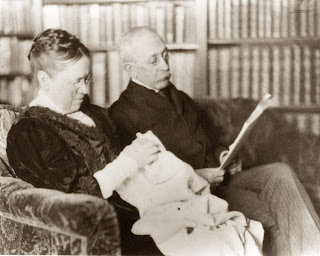 John and Frances Glessner were married for nearly 62 years and shared an extraordinarly close and loving relationship.  A few months after Frances Glessner died in October 1932, John wrote a loving tribute to his wife and helpmate.  Several copies were printed and bound in elegant blue leather, complete with slipcase, which were presented to family and intimate friends.   In honor of Valentine’s Day, we present a few excerpts from that tribute.
She was a home-maker, a home-preserver – that was her first ambition, that was her most desired and profound success.  But the home was not to be confined within its own four walls.  It was to bring other friends within its sweet influence.  She was a home-making woman who sought not public applause.  Wherever she went she took her workbag and work-basket and hung them in the room where she was, even in the sleeping cars, and they made the room a home.  These are not idle words: they are true in every sense.
She was attentive to her obligations in every Society or Association of which she was a member: she was never known to neglect any duty, however disagreeable it might be.
She was a broad-minded, generous, charitable woman – admirable in every way, with all feminine graces and attributes.  She was not a worldly woman, never vaunted herself, always ready with some helpful suggestions; ready to share her good fortune with those less fortunate – a woman of strong individuality, a rare character.  Everybody who came in contact with her admired her.
A day or two before the funeral came this verse by mail, with nothing to identify the author except that it was in Mrs. Paul Shorey’s envelope:
“The crowding memories of the past,
The bonds of love that cannot end,
The ties that life and death outlast,
To such as these, no words can lend.
The essence still eludes the will,
Finite and infinite cannot blend,
Our grateful hearts can but distil
The simple words, ---
She was Our Friend.
”
At the regular concerts of Thursday evening and Friday afternoon, October 20 and 21, Mr. Stock added to the program, out of respect for her, Bach’s wonderful Chorale Prelude, very impressive, after which the Orchestra and audience stood for a few minutes in silence.
And now her busy hands are still; her active brain is quiet; her heart and soul have passed beyond this earthly sphere.  None knew her but to love her, none named her but to praise.
What would she have thought could she have stood beside me and looked down at that placid countenance in its last sleep.  It was dignified.  It was impressive.  It was lovely.  It was not the same.  Its spirit had fled.
After sixty-two years of happy married life, no tribute that I can offer seems adequate to her merit.  Rarely shall we look upon her like again.
Posted by Glessner House Museum at 3:43 PM No comments: 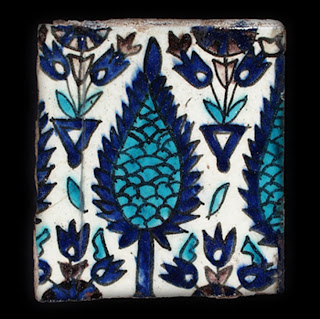 During 1886 and 1887 when the house was under construction, John and Frances Glessner spent considerable time shopping for countless items for their new home, from fireplace fittings to rugs, and textiles to tiles.  One of the most interesting items they acquired was a set of Iznik tiles for the dining room fireplace.   (The name Iznik derives from the city in Turkey where the tiles were made).

In 1886, during a trip to New York, Frances Glessner records in her journal:  “We went Thursday morning to hunt up tiles.  We found some beauties at Lockwood de Forest’s.”  Lockwood de Forest (1850-1932) was an important figure in the American Aesthetic Movement, largely remembered today for introducting East Indian crafts to America.  He was born into a wealthy family that encouraged the study and pursuit of the arts; his older brother Robert Weeks de Forest served as president of The Metropolitan Museum of Art in New York for seventeen years.  Lockwood de Forest studied painting with his great uncle Frederic Edwin Church and enjoyed moderate success.  By the late 1870s however, he turned his attention to decoration and architecture, becoming a partner in the design firm of Associated Artists, along with Louis Comfort Tiffany, Samuel Colman, and Candace Wheeler.  His travels took him to the Middle East, North Africa, and most importantly British India, where he developed a passion for local craftsmanship.  He opened a workshop in India, which produced architectural elements and furniture.  After Associated Artists closed in 1882, de Forest opened his own company, which was hugely successful, supplying decorative items and architectural elements to such clients as Andrew Carnegie, Charles Tyson Yerkes, Mark Twain, and Potter Palmer.   In later years he built a home at Santa Barbara, California where he resumed painting actively.  He died there in 1932. 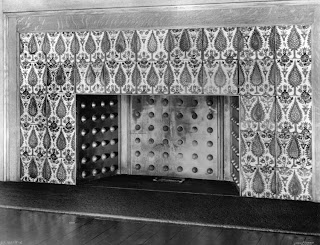 The tiles that the Glessners purchased from de Forest for their dining room fireplace were among the many objects that he acquired and shipped to the U.S. for his American clients.  He apparently owned quite a few tiles in the design that the Glessner selected, for they appear in at least two other houses with which he was connected, including his own home in Santa Barbara (where they are used on a fountain in an outdoor courtyard).  Correspondence between de Forest and the Glessners indicates that they bought the remaining tiles of this particular design that he had in his shop. 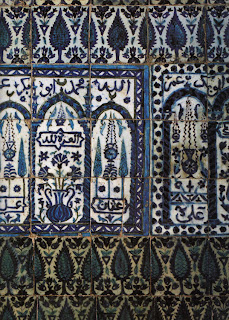 The tiles, which measure roughly eight inches square were made in Iznik region of Turkey in the middle part of the 16th century.  They were installed in various locations throughout the Middle East including the tomb of Muhi al-Din Ibn ‘Arabi in Damascus (see above).  Polychromatic schemes were developed during this middle period of Iznik pottery making using seven colors in various combinations – blue, purple, red, green, turquoise, grey, and black.  The body of the tiles is fritware, a composite paste material made from quartz sand mixed with small amounts of finely ground glass (frit) and clay.  When fired, the frit melts and binds the other components together.  The tile was then coated with a thin layer of white slip, a liquid clay mixture, similar to the fritware paste, but more finely ground and purer in composition.  The tile was lightly fired to dry it out, and then painted with pigments mixed with frit.  The wares were then glazed with a lead-alkaline-tin glaze and fired to a transparent sheen.

After the Glessners died in the 1930s, their daughter, Frances Glessner Lee, had the tiles removed and reinstalled on a fireplace at the “cottage,” her home at The Rocks estate in New Hampshire.  They remain at the cottage today, but are promised to the museum and will be returned once sufficient funding is in hand to remove them and reinstall in the dining room.  At present, only two original tiles are on the fireplace, distinguishable by their slightly darker color.  They were a gift of Frances Lee’s daughter, Martha Lee Batchelder.  All the other are reproductions created in the 1970s by artist Paula Garrett Ellis.  A third original tile is displayed on the plate rail in the main hall, a gift from Dr. Edward Gamson of Washington D.C., who acquired it from an employee of Armour Institute, which occupied the Glessner house at the time the tiles were removed in the 1930s.
Posted by Glessner House Museum at 5:48 PM No comments: