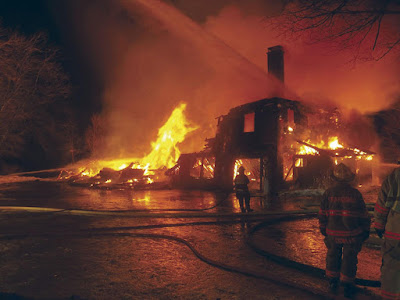 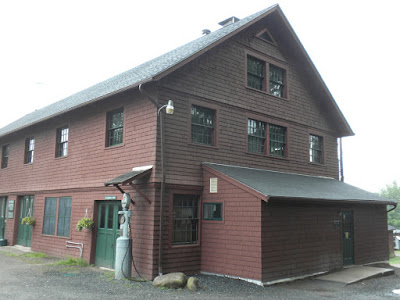 A devastating fire at The Rocks on the evening of Wednesday February 13, 2019, destroyed two century-old historic structures on the property, which was listed on the National Register of Historic Places in 1984.  No one was injured in the fire, and the nearby home of long-time property manager Nigel Manley, escaped damage.  The Rocks, located in Bethlehem, New Hampshire, was the summer estate and working farm of the Glessner family for several generations and since 1978 has been owned and operated by The Society for the Protection of New Hampshire Forests (SPNHF). 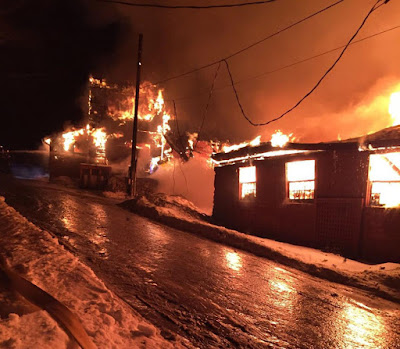 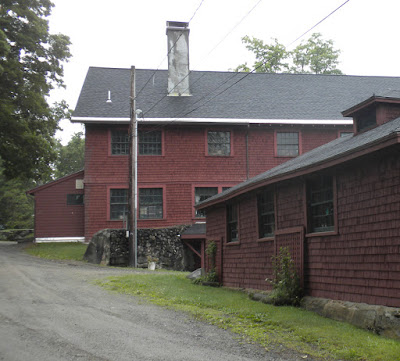 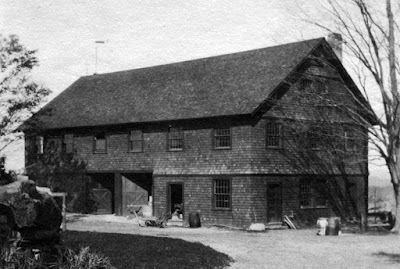 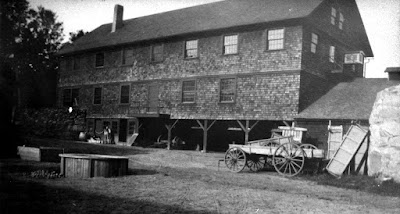 The Tool Building was built to house a variety of power-driven machines used in the production and repair of equipment for the estate.  The large, gable-roofed structure was two stories high on the west front, and three stories on the rear.  It was clad in wood shingles which were stained a dark red, like other buildings on the estate.   An L-shaped wing on the north side of the building functioned primarily as an ice house. 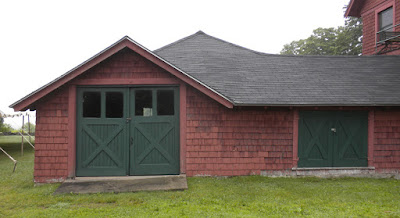 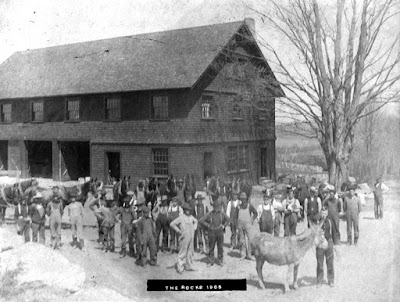 The building was the site of numerous social events, one of which was recorded in some detail in a journal entry dated September 18, 1906:
“Friday evening, we gave a party to the working people in the Tool building.  We took everything out and made a little stage.  We hung branches of evergreen in among the iron strips and put two large vases of sun flowers and asparagus fern on each side of the stage.  We took lamps down and put one on each side of the stage and put hanging chimes around from the ceiling.  We asked our people and their wives – and many who have been connected with the place, and many of the neighbors.
“We hired omnibuses to bring them out from town.  There were one hundred and sixty-five here.  Mr. Tramonti (harpist with the Chicago Orchestra) was very nervous but pleased the audience very much.  John introduced him very nicely and the audience was very appreciative and attentive.  After the concert ice cream and cake was served.” 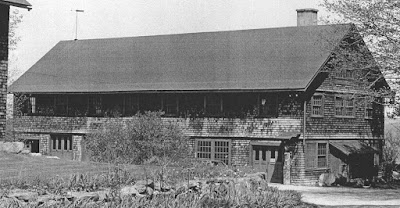 In June 1907, Frances Glessner noted “we commenced to build the addition to the tool building.”   That addition, consisting of one additional bay located at the south end of the building, was constructed to provide a blacksmith shop (used in recent years by a Glessner descendant). 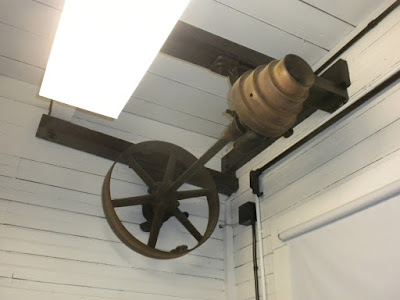 The upper floor contained a fully equipped woodworking shop with a variety of early equipment, originally belt-driven from a central power source.  A gas pump was installed outside to provide fuel for farm vehicles. 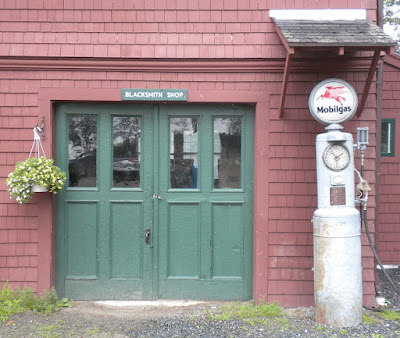 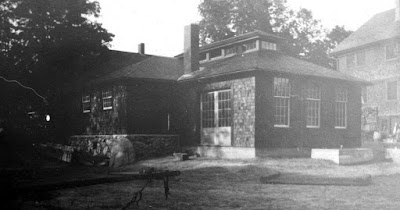 The Electric Building, circa 1910

The Electric Plant stood immediately to the east of the Tool Building and was constructed to house the original power plant for the estate.    Laid out on a T-plan, the plant was a low hip-roofed frame structure with a clerestory at the central roof ridge.  It was clad in the same dark red-stained wood shingles.

The foundation for the building was set in place in July 1910 as work was underway to electrify the various buildings as noted in this journal entry dated July 16, 1910:
“Some progress has been made on the Cottage improvements, and the electric light work has been started.  The foundations are in for the power building.  Wynne the Chicago electrician began on Wednesday or Thursday and has a good deal of the tool building piped for wiring.”
By August 21st, “the electric and power building is completed except the chimney and the “help” in our different houses have asked for a dance there next Thursday” (which did take place).  Electric was apparently fully functional by September 18th when the first electric lamp was lighted at the Big House (the Glessners’ residence) as an experiment. 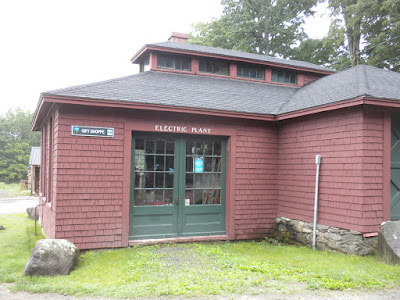 LATER HISTORY
After John Glessner’s death in January 1936, the estate, which had grown to 1,500 acres, was divided equally between his daughter, Frances Glessner Lee, and his daughter-in-law, Alice Hamlin Glessner.  Following Alice’s death, Lee reassembled the estate and continued to operate it as a farm until her death in January 1962.  (Her tax returns each year listed her occupation as “farmer.”).  Lee’s children, John Glessner Lee and Martha Lee Batchelder continued operations of the farm until 1978 when the property was donated to the Society for the Protection of New Hampshire Forests, of which their grandfather, John J. Glessner, was an early member.

A stipulation of the gift was that there always be a crop in the field.  The Forest Society noted, “for more than three decades, that crop has been Christmas trees, and people come to The Rocks from near and far each year to find their perfect tree.”  (Continuing a tradition begun by the Glessners in the 1880s, Glessner House acquires its Christmas tree each year from The Rocks).

The famous Budweiser Clydesdales in front of the Tool Building,
January 2010 (Courtesy of The Rocks Estate) 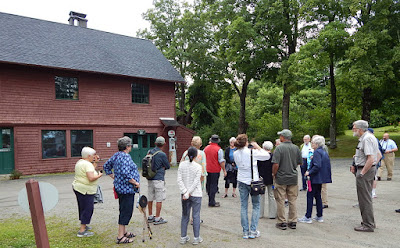 Glessner House docents in front of the Tool Building, August 2017

Posted by Glessner House Museum at 8:17 PM No comments:

On February 4, 1962, 57 years ago today, a loving tribute to Frances Glessner Lee (who had died a week earlier at the age of 83) appeared on the front page of The Boston Sunday Globe.  It was written by her long-time friend, Erle Stanley Gardner, the best-selling author of more than 80 Perry Mason novels.   As Gardner noted at the beginning of the article, “There is no charge for this; it’s a labor of love.”

Being a personal account and not a formal biography, the tribute accurately provides the reader with a sense of Lee’s personality, and her relentless drive to make an impact in the field of legal medicine.  Tough and compassionate at the same time, it is no wonder that the work she undertook is still celebrated today. 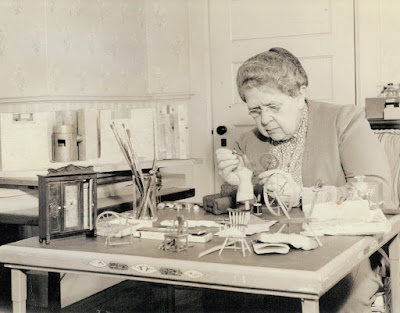 My friend, Captain Frances G. Lee, had a keen brain, a big heart, and an open mind.

I collect characters as other people collect postage stamps, and Capt. Lee was one of the rarer items in my book.
I well remember one occasion when she was being interviewed by a top-flight reporter who was in something of a hurry.  He was anxious to get the preliminaries over with.  He shot questions at Capt. Lee and then when she had the question about half answered, would interrupt to finish in his own words what he thought the answer was going to be, or perhaps what he felt the answer should have been.

At about the third interruption, Capt. Lee lowered the boom on him.

She thrust her head slightly forward, pushed out her jaw and said, “Look here, young man, you’re trying to anticipate what I’m going to say and you haven’t brains enough to do it.”

From then on the interview proceeded in a more orderly manner.

Capt. Lee was a perfectionist in every sense of the word.  When she gave her banquets, which were the social highlights of the seminars on homicide investigation conducted at the Harvard Medical School, she gave hours of careful consideration to the seating arrangements, to the floral decorations and to the program.  I don’t think there was any detail too small or too insignificant to be given careful, painstaking consideration; and by the same token, she was tremendously upset when something happened to throw any of her arrangements out of gear.

Because she had an orderly mind and a logical mind, she was able to comprehend police work in a way that enabled her to make a shrewd and accurate appraisal of individual cases as well as overall planning of what was being done and an accurate estimate of what should be done.

Because she had a great big human heart, a warm understanding and the approach of a woman of highly developed maternal instincts, she not only adopted the cause of legal medicine and law enforcement as an intellectual pursuit, but she came to regard the men in law enforcement as her “boys” and they in turn gave her a respect and affection which brought about a warm, human relationship.

No one knows just how much good Capt. Lee’s seminars did.  Not only did the men learn something of the importance of legal medicine as it related to law enforcement, but they had an opportunity to meet with each other on a social basis where they could discuss their mutual problems against a sympathetic background.

I remember pointing out to her at one time that any person who would be big enough to handle the Department of Legal Medicine at Harvard University would be too big to be dominated by any outsider and that she must be prepared to make compromises when her ideas came in conflict with those of the department head.

The advice was unsolicited and, I think, unappreciated.  When it came to her ideas and ideals Capt. Lee wasn’t compromising anything with anybody; and when it came to fighting she just waded right in.

Those who knew her marveled at the tenacity with which she held on to her work and her life.

I remember on one occasion when by just deviating a hairs-breadth from her planned course, Capt. Lee could have received some publicity which I felt would have been of considerable value to her.  I somewhat timidly ventured the suggestion that under the circumstances she might well deviate very slightly from her planned method of approach – and promptly had my ears pinned back.

Capt. Lee was my friend.

I appreciated the work she was doing and the importance of that work.  For that reason I was willing to devote much of my time to helping her wherever I could be of help.  She was also my personal friend because I appreciated her grim, relentless pursuit of an objective, her uncompromising insistence upon the best and her loyalty to the causes she espoused and to her friends generally.

Capt. Lee had a strong individuality, a unique, unforgettable character, was a fiercely competent fighter, and a practical idealist.

The cause of legal medicine and law enforcement suffered a great blow with her passing, and yet for years the country will benefit because of her dogged determination, her down-to-earth grasp of the problems with which she was confronted, and her unswerving determination to find a solution by persistence, diplomacy, charm, and, if all else failed, by downright battering-ram in-fighting.
She was a wonderful woman.

Posted by Glessner House Museum at 3:42 PM No comments: