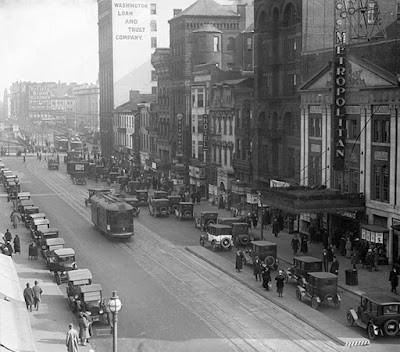 During the 1880s, architect H. H. Richardson designed four residences in Washington, D.C.  Within a five year period in the mid-1920s, however, all four of these structures were demolished.  (The façade of one, built for John Glessner’s business partner, Benjamin H. Warder, was salvaged and rebuilt at a different location.)  In spite of this disregard for the importance of these buildings, Richardson’s legacy survives in our capital city through a number of prominent buildings designed by local architects in the Richardsonian Romanesque style.  In this article, we will look at three of the most significant structures, all located on the 900 block of F Street, NW. 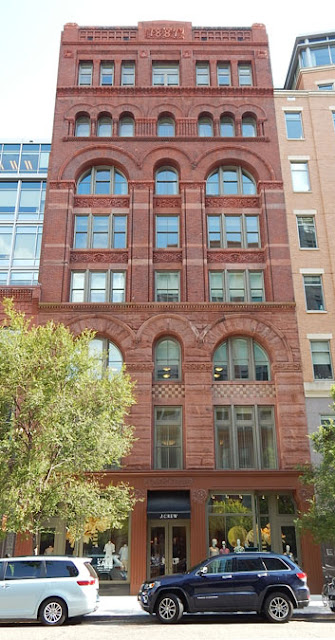 The oldest of the three, the Atlantic Building, was completed in 1888 and, at eight stories, was the largest commercial structure in the city at that time.  The building was constructed as a speculative office building by a group of Washington businessmen, headed by attorney Alexander Thompson Britton.  Many of the 142 offices were rented to attorneys who appreciated the convenience of being near the Patent Office and Pension Building on the next block.  The eighth floor contained two large assembly rooms which hosted numerous important meetings including one at which the National Zoo was founded.  President Benjamin Harrison’s 1890 inaugural committee used one of the rooms for their headquarters. 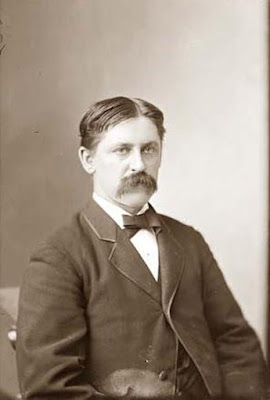 The architect of the building was James G. Hill.   Born in 1841, Hill headed the Office of the Supervising Architect of the U.S. Department of the Treasury from 1876 to 1883.  During that period he designed or supervised numerous projects including courthouses, post offices, and other public buildings in Washington, D.C. and elsewhere.  Many of these are designed in the Richardsonian Romanesque style, including the Old Post Office in Albany, New York, one of several Hill buildings listed on the National Register. 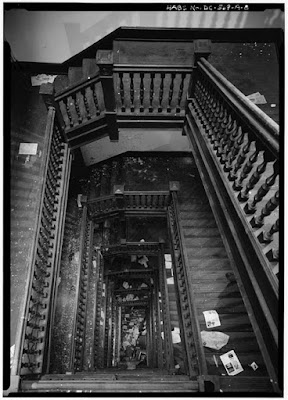 Photo by John McWilliams for HABS, 1990 (Library of Congress)

The Atlantic Building was among the last to be constructed with load bearing masonry walls but one of the first DC office buildings to contain a passenger elevator.  A wooden staircase wraps around a skylit stairwell, providing secondary access to the offices featuring fireplaces with wood mantels and decorative tiles.  The ground floor, originally designed with projecting show windows, was designed for retail use. 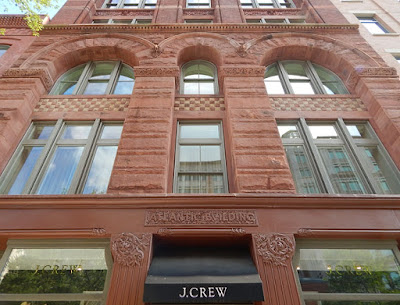 A variety of materials are used to present a highly ornamented and decorative façade.  The ground floor retail space features a cast iron façade, with Sullivanesque-style flourishes including the name “ATLANTIC BUILDING” set amidst lush foliate decoration.  The second and third floors are grouped under a series of three arches, with recessed spandrels displaying a checkerboard pattern of two contrasting stones, a device frequently used by Richardson. 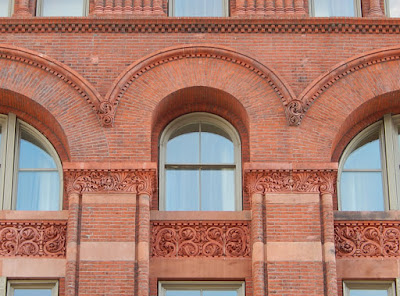 The remaining floors are faced in brick with floors four through six grouped together under arches with richly decorated recessed terra cotta spandrel panels. 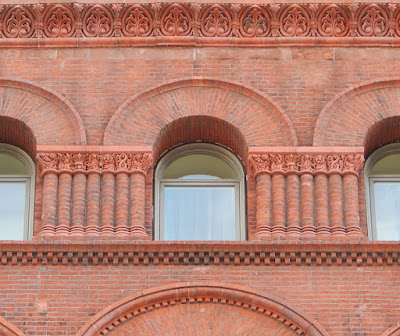 The seventh floor is simpler with smaller single story arched window openings and two groupings of clustered columns.  The eight floor, the location of the large assembly rooms, is the most simple, and is set beneath a tall parapet wall with a large decorative center panel featuring the year construction began, 1887. 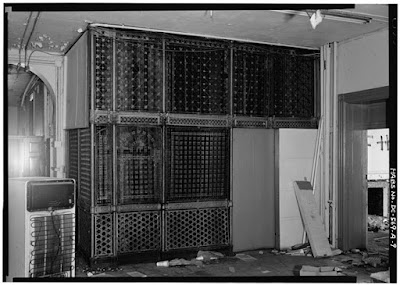 Photo by John McWilliams for HABS, 1990 (Library of Congress)

The building was in poor condition when it was documented by the Historic American Buildings Survey in 1990, including photographs by John McWilliams.  It was extensively restored in recent years as part of a larger development that includes new and renovated buildings wrapping around the corner onto 10th Street, extending south to Ford’s Theatre.  It is listed as a Category III Landmark in the District of Columbia.

The National Union Building was designed by a devoted admirer of H. H. Richardson, architect Glenn Brown.  Born in 1854 in Virginia, Brown rejected the classical training he received at M.I.T. and instead chose to follow Richardson, a fellow Southerner, whose designs were “not limited and bound by rules and regulation.”  Brown spent two years as the Clerk of Works for O. W. Norcross, the firm selected by Richardson to construct many of his most important buildings (including Glessner House).  Although Brown greatly admired Richardson’s work, he did not feel that the architects who continued in the style were nearly as successful.  As noted in Brown’s 1931 Memoirs, “While all of Richardson’s work was artistic, interesting and cultured, he set a fashion in architecture that produced monstrosities throughout the country.  Not a single one of his followers produced an example worthy of notice.”  (Presumably he excluded himself from that evaluation). 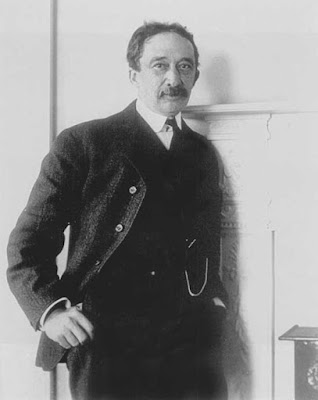 Brown served for many years as secretary of the American Institute of Architects, and was largely responsible for the purchase of the Octagon House in Washington, D.C. as its national headquarters.  He also took a deep interest in the L’Enfant Plan for the city and his work in advocating the plan led to the establishment of the Senate Park Commission and their 1901 Plan for Washington.  A prolific author, he wrote the two-volume History of the U. S. Capitol in 1901-1904, and was also deeply interested in historic preservation, leading the restoration efforts at Gunston Hall and Pohick Episcopal Church, both located in Fairfax County in his native Virginia. 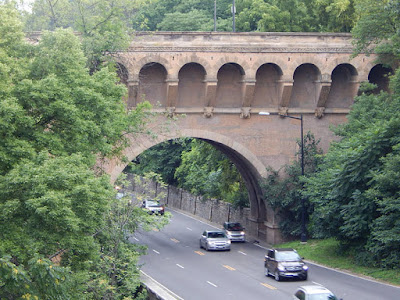 Among Brown’s other projects in Washington, D.C. is the Dumbarton Bridge, which carries Q Street across Rock Creek Park between Dupont Circle and Georgetown.  The bridge, completed in 1915, was inspired by a Roman aqueduct and is one of numerous projects by Brown to be listed on the National Register.

The National Union Building was constructed in 1890 for the National Union Fire Insurance Company, which occupied the structure until after World War II.   Given the original owner, it is not surprising that the structure was constructed using a fireproof steel frame, combined with brick bearing walls.   Although the building is quite narrow, its façade measuring only 26 feet across, the use of rusticated stone and design elements spanning more than one story give it a commanding presence on the street. 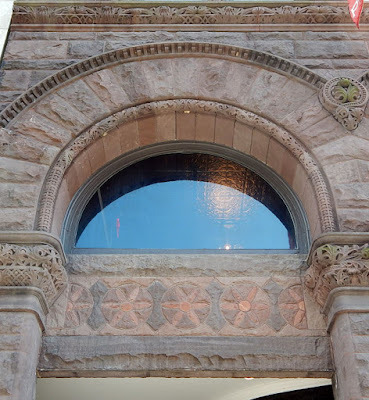 The first two stories are combined under a pair of large arches set atop three pilasters with richly ornamented capitals, the center one of which features an owl set amongst the foliage.  Most noticeable is the pair of recessed spandrels featuring six-petalled flowers composed of stones in contrasting colors.  The effect is reminiscent of similar flowers seen on the façade of Richardson’s Austin Hall at Harvard, which also features the checkerboard stone patterning copied for the Atlantic Building. 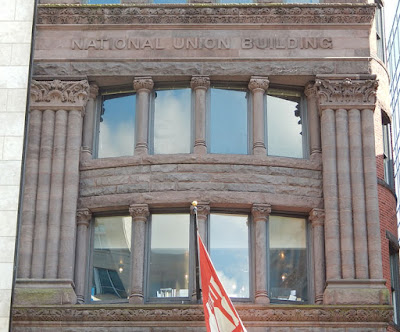 Floors three and four, set beneath a huge panel reading “NATIONAL UNION BUILDING,” are united by two-story groupings of clustered columns at either end, framing slightly bowed ribbon windows.  The remaining floors feature smaller windows expressing the four bays, the sixth floor window openings set beneath arches and framed with engaged columns, a treatment similar to Richardson’s Allegheny County Courthouse.  Set above the sixth floor is a row of sixteen small windows illuminating the attic, set beneath a decorative cornice.

The west side of the building, facing into an alley, features a brick-faced oriel window extending from floors two through six.  The interior of the building was designed with tiled vestibules on the east side of each floor, with all of the offices facing west, accessed by an open cage elevator and a wide metal staircase. 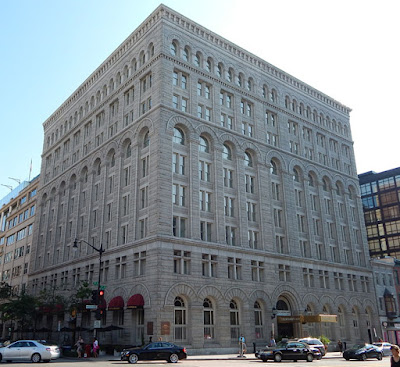 This building, the largest of the three, has maintained a commanding presence over the intersection of F and 9th Streets since it was completed in 1891 for Washington’s largest and oldest trust company.  The architect was James G. Hill, the same architect who designed the Atlantic Building (see above).  Given the stylistic similarities with Adler & Sullivan’s Auditorium Building in Chicago, completed just two years earlier, one can’t help but assume Hill was familiar with that iconic building and used it as inspiration. 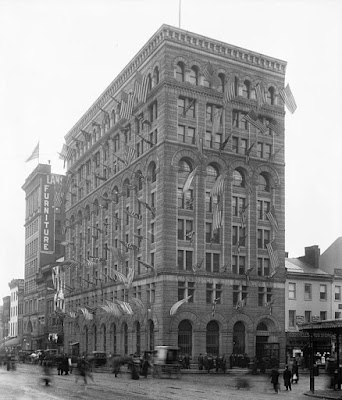 The original building for the Trust Company was considerably smaller than the current structure, extending only four bays along F Street.  When six additional bays were added in 1926-1927 under the direction of architect Arthur B. Heaton, every element of the original design was replicated exactly, forming an overall seamless composition. 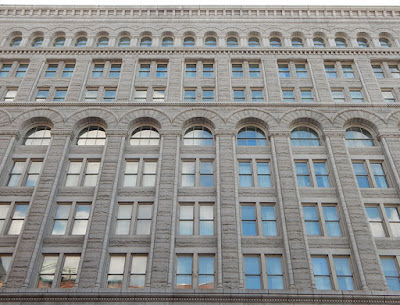 Classified as a Category II Landmark in the District of Columbia and listed on the National Register, the building is one of the very finest Richardsonian Romanesque buildings in the capital city.  Faced in rusticated gray granite, the façade extends nine bays along 9th Street, where one can sense the rhythm of the fenestration, set into four distinct sections. 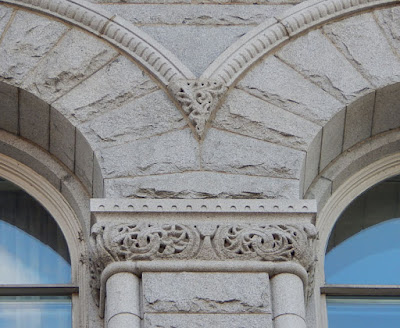 The ground floor windows and doorways are set beneath huge arches with a row of simple unadorned transomed-windows above, all set beneath a belt-course with dentil trim.  The four floors above are grouped under arched arcades, highlighted with delicate colonettes at the piers.  These four floors are especially reminiscent of the Auditorium Building design.  The third section consists of two additional floors with simpler pairs of double hung windows set beneath another course of bolder dentil trim.  The upper most floor features windows set beneath arches with pairs of columns forming the piers, all set beneath another row of dentil trim and a dentated cornice.

In later years, the building was occupied by Riggs Bank.  It now houses a Courtyard by Marriott hotel and brew pub.

Together these three buildings provide an outstanding opportunity to experience how architects perpetuated the Richardsonian Romanesque style in the years immediately following the architect’s death in 1886.  As a grouping, they also provide a well-preserved visual reminder of the late 19th-century period in Washington, D.C.’s architectural history.

Posted by Glessner House Museum at 2:27 PM No comments: