In Part I of our series, we looked at the prehistory of the present site of the Chicago Women’s Park and Gardens including the houses that stood there and the difference in development between Prairie and Indiana Avenues. A series of photos taken by Richard Nickel in the late 1960s captured the decline the neighborhood had experienced throughout much of the 20th century. In this installment, we will explore the period from 1968 until the early 1990s, when various proposals were developed to convert this grouping of vacant lots and parking lots into a park that would serve as a source of pride and an asset to the surrounding community.

As Marian Despres noted in her book, The First Twenty Years 1966-1986, “the creation of a park memorializing an important part of Chicago’s history in the midst of a rubble-strewn, long-deserted neighborhood was a great event.” Although she used the term “park” to describe the Prairie Avenue Historic District as a whole, the land comprising the present Women’s Park was always an essential part of the discussion. Within two years of saving Glessner House in 1966, the houses immediately to the south, at 1808 and 1812 S. Prairie, and the house across the street, at 1815 S. Prairie, had all been razed. This prompted a realization of the need to protect and preserve the historic resources that remained and to find a new use for the large swath of open land south of Glessner House. 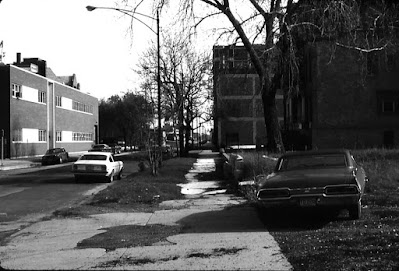 Planning funds were received in 1972 from the Chicago Community Trust and the National Endowment for the Arts to hire two nationally recognized planning experts. Roy Graham led the planning for Colonial Williamsburg, and James Marston Fitch was the founder and director of the historic preservation program at Columbia University. Regarding Fitch’s report, Despres noted:

“He recommended restoring and moving in other old buildings, some to be occupied to keep the area alive 24 hours a day. He suggested that developers working in areas where there were fine or significant old buildings be encouraged to move them to the District; they would save demolition costs and the donation of a house to the District could bring a tax benefit.”

The idea to move Clarke House into the area was a direct outgrowth of Fitch’s report; it was ultimately the only building moved to Prairie Avenue. Fitch also suggested the display of architectural fragments – larger pieces in an outdoor park, and smaller and more fragile pieces in the Swiss Products building at 1801 S. Indiana Avenue (the present fieldhouse). This recommendation addressed another issue - a growing collection of architectural fragments was gathering at Glessner, many salvaged by Richard Nickel during the unchecked demolition in the 1950s and 1960s of significant buildings by Adler & Sullivan, Burnham & Root, Frank Lloyd Wright, and others. 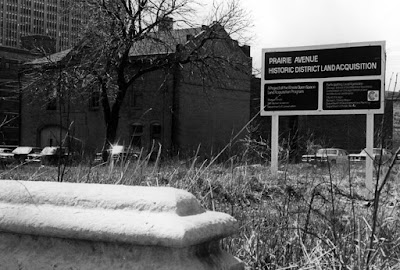 Land Acquisition
By the summer of 1973, the Chicago City Council approved the acquisition of the first parcels of land that comprise the current park, utilizing forthcoming funds from a State of Illinois Open Lands grant, along with federal funds from the Department of Housing and Urban Development that would be released once the city provide a 1-to-3 match. Governor Dan Walker visited Glessner House in September 1974 to sign the Open Lands grant agreement that provided a total of $350,000 in state funding for the project. 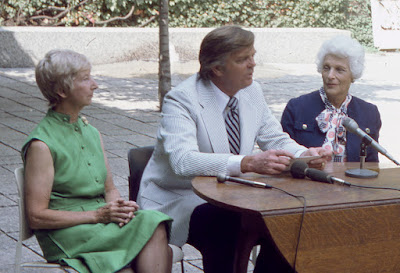 In December of that year, Richard Macias of Preservation Urban Design was engaged to create the master plan for the Prairie Avenue streetscape, the park site, and the Swiss Products building. When Macias presented his plan in July 1975, proposed elements of the park included “footsteps” representing the original foundations of the lost houses on Prairie Avenue, and the division of the park into quadrants representing four distinct periods in the history of Chicago architecture. “The vacant land between the Glessner and Keith houses and part of the land surrounding the Clarke House site will become an architectural park where ornament, exhibits and demonstrations of Chicago architecture will be shown in a correct, handsome park setting.”

In 1977, the City of Chicago purchased the Clarke house from the St. Paul Church of God in Christ, which, under the leadership of Bishop Louis Henry Ford, had preserved the building for more than three decades. Plans were made to move the 120-ton structure nearly four miles from its site at 4526 S. Wabash Avenue to its new home on the Indiana Avenue side of the park. 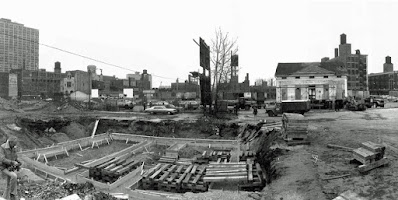 Clarke House resting on Indiana Avenue, awaiting the move onto its new foundation (shown in the foreground), December 1977

The move in December 1977 attracted national attention, including the lifting of the building up and over the Green Line tracks at Calumet Avenue and 44th Street. (Click here to read an August 2014 blog article about the move). In 1978, The National Society of the Colonial Dames of America in the State of Illinois signed on as a partner to restore and furnish the interior of the house. It opened to the public in 1982. 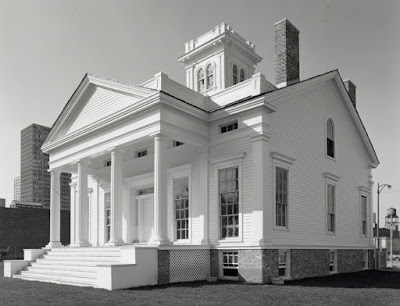 The year 1978 saw major progress. The streetscape of the 1800 block of South Prairie Avenue was restored to its 1890s appearance as suggested by Fitch, including limestone sidewalks, period light fixtures, granite curbs, and cobblestone gutters. Several buildings that were determined too deteriorated to be restored were razed, including the three rowhouses that faced 18th Street immediately west of Glessner House, and two surviving coach houses in the 1800 block of Indiana Avenue.

An interesting concept to interpret the Prairie Avenue side of the park was developed by Ruth Moore Garbe and members of her Prairie Avenue Historic District committee. To represent the six houses that originally faced Prairie, the committee acquired historic and modern stone curbs and wrought iron fences in six different designs, to delineate the original house lots. The most significant fragments incorporated into the fence were four carved limestone columns from the former home of John G. Shedd at 4515 S. Drexel Boulevard. These were placed in front of the 1812 S. Prairie house site. (The entire porch of the Shedd house had been dismantled with the idea of erecting it as a pavilion in the park. Over time, portions disappeared, so in the end, only the four columns were reused). 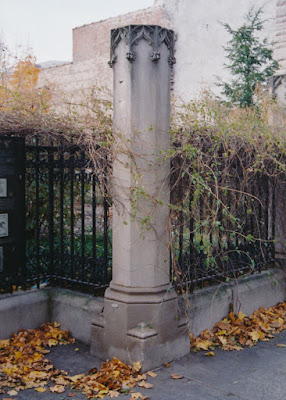 A recessed alcove in each section of fence along Prairie Avenue marked the location of the sidewalk that would have led up to the front door of each house. The old iron gate from the Chicago Public Library was installed at the alley entrance off of 18th Street. Asphalt parking lots, remnants of old sidewalks, and debris were removed, and the entire park site became a lush expanse of grass. 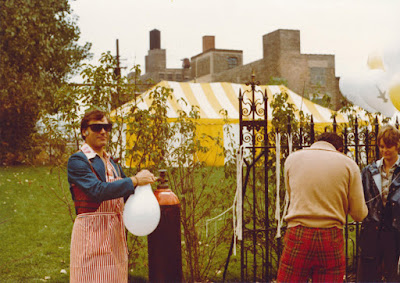 The Prairie Avenue Historic District was opened in September 1978 with three days of celebrations including “A Sunday on Prairie Avenue” on September 17, featuring music, food, and activities typical of a late 19th century street fair. A huge tent was erected in the park for performances and presentations.

That same year, Macias was asked to complete the interpretive plan for the park. Negotiations were underway to acquire the Swiss Products building, with the thought of demolishing it and extending the park land to the corner of Indiana Avenue and 18th Street. The plans also called for using the existing brick alley, which cut the park into two halves, as a dividing line to define different historic periods. The park land around Clarke House would interpret Chicago’s early history, whereas the park land along Prairie Avenue between the Glessner and Keith houses, would interpret post-fire Chicago including the development of the Chicago School of architecture. 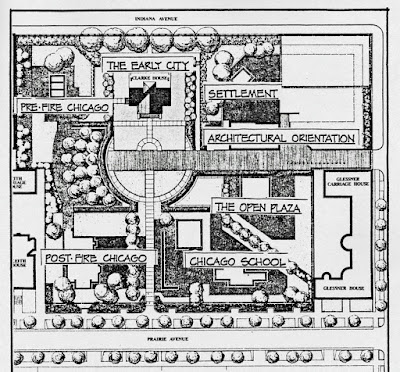 The park plans were set aside for several years once it was announced that Chicago was considering hosting a World’s Fair in 1992 on the lakefront immediately to the east of the Historic District, with 18th Street to be a major entrance corridor. For the next several years, discussions focused on the relationship of the neighborhood to the proposed fairgrounds.

Two smaller pieces of the plan were instituted during the 1980s. A series of interpretive panels showcasing the houses along Prairie Avenue had been under development since the fences were erected along the street in 1978. During the summer of 1982, the first nine panels were installed in the fence alcoves and in front of surviving houses and the site of lost houses on the east side of Prairie. Each panel featured a rendering of the house, information on the family that built it, and their contributions to the business and cultural growth of the city. Five more panels were added later. 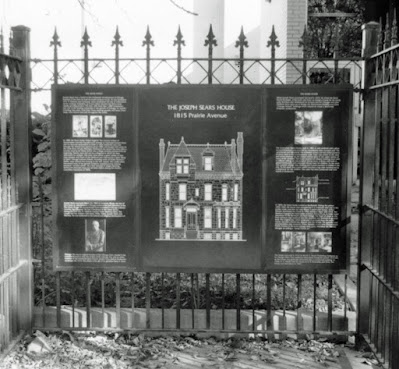 In May 1987, the bronze sculpture commemorating the Battle of Fort Dearborn (at the time still referred to as the “Fort Dearborn Massacre”) was returned to the neighborhood and placed in the park to the south of Glessner House. The sculpture, erected by George Pullman in 1893 on his property at 1729 S. Prairie Avenue, had been removed in the early 1930s after it was vandalized. It was owned and displayed by the Chicago Historical Society for many years, before being deeded to the city in 1986, making its return to the area possible. 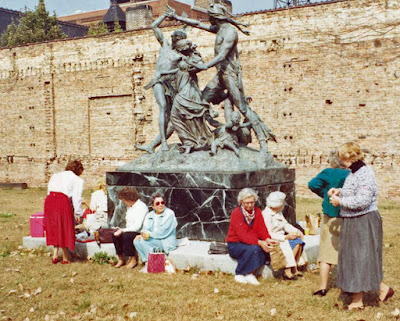 Neighborhood tourees take a break in front of the Battle statue, circa 1990

In 1989, after plans to host the World’s Fair were abandoned, there was renewed interest in moving forward with plans for the park. Landscape architect Michele McBride was engaged to prepare an updated master plan with a total price tag of $600,000. Major components included period gardens around Clarke house, such as the family might have tended during its period of occupancy, and a meadow area with grasses and wildflowers that would convey the character of a native prairie. 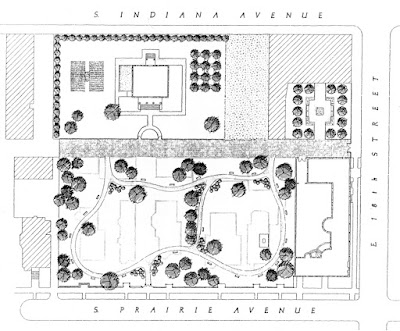 The Prairie Avenue side of the park was envisioned as more of a true park with large open lawns dotted with trees. The outlines of the original houses would be defined in stone and would relate directly to the interpretive signage set into the fence alcoves along the street. A meandering path would move in and out of the “houses.”

As was the case with earlier plans, it was never acted upon and the park remained undeveloped. Gerald R. Wolfe, in his book, Chicago In and Around the Loop, noted the park with its few architectural fragments “creating the impression of an old cemetery, which in effect it is, with the scattered chunks of stone as memorials to the once proud houses.”

The granite fragments were pieces of two 45-foot-tall Corinthian columns that had originally supported the dome of the Federal Building designed by Henry Ives Cobb. They were salvaged when the building was demolished in 1965, but by the early 1980s they had been thrown into Lake Michigan to reinforce a breakwater. Being rescued once again, they were moved to the park on Prairie Avenue where they remained until being reassembled in 1996 to form the gateway into the Richard and Annette Bloch Cancer Survivors Garden in the northeast corner of what is now Maggie Daley Park. With the removal of these columns from Prairie Avenue, the idea of an architectural fragment park was permanently put to rest. 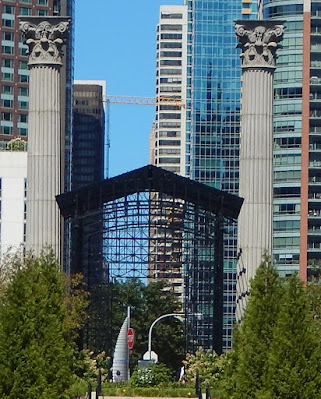 Federal Building columns as installed at the Cancer Survivors Garden

In our next installment, we will examine a period of great activity for the park in the late 1990s that coincided with the redevelopment of the surrounding neighborhood as a highly desirable residential community for the first time in almost 100 years.

Posted by Glessner House Museum at 8:57 AM No comments: