Christmas Dinner at the Glessner house - 1895 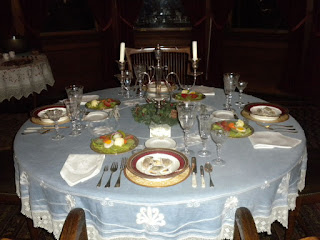 is once again decked out for the Christmas holidays.  Among the rooms to be interpreted in a special way at this time of year is the dining room, where visitors can learn about the elaborate Christmas feast of 1895.  The table, sideboard, and side table are set with some of the offerings of this eight course meal, which was served at on Christmas night to the Glessner family and five guests.  The dining room table is set with pieces from four different china services used by the family, and the silver flatware, a wedding gift to Frances Glessner and Blewett Lee in 1898, is identical to the flatware used by the Glessners.

Special Christmas Candlelight Tours of both the Clarke and Glessner house museums focusing on Christmas traditions will be offered the weekend of December 8th and 9th, with tours at 5:30, 6:00, and each evening.   For more information, click here.  Pre-paid reservations are required and may be made by calling . 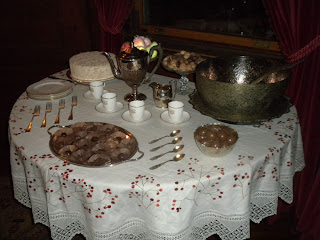 In her journal, Frances Glessner records the following information about Christmas Day 1895:

“In the evening, Mr. Hendricks, Mr. Badger, Mr. Marsick came to dinner (joining the four Glessners and Mr. and Mrs. Moore, who had been staying at the house since Tuesday).  Prof. Hendrickson of the University at was here most of the day.  He is a very attractive man.  He lost his wife in the spring – and is coming next year to be in the Latin Department in our University (the ).  Mr. Marsick heard play and said her teacher was not a good one – he advised her to change.  He seemed to enjoy his dinner extremely – praised every thing.  The salad he pronounced a poem – superb.  He sang and played for us.  He told about Saint-Saens animal symphony and sang The Swan.  He asked if he might come back and bring his violins to show .  Mr. Badger, Mr. and Mrs. Moore staid over night.” 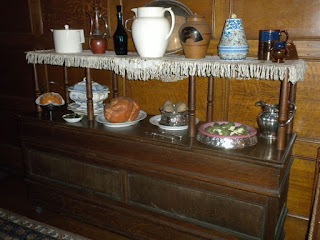 Frances Glessner recorded the menu in her dinner book.  The meal consisted of eight courses as follows: 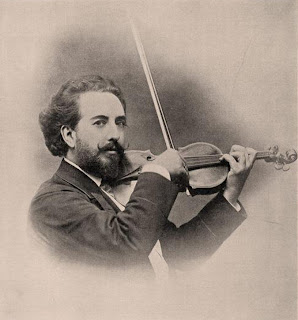 Of particular interest is one of the guests at the Christmas dinner, Martin Pierre Marsick.  The Glessners first met Marsick on Sunday December 21, when their friend Miss Millar telephoned to know if she might bring Mr. Marsick up to call.  The Glessners immediately said yes.  At that initial meeting, Frances Glessner wrote that “Mr. Marsick was extremely pleasant, played and sang, and talked.”

Martin Pierre Marsick (1847-1924) was a Belgian violin player, composer, and teacher.  His violin, made by Antonio Stradivari in 1705, has since become known as the Ex Marsick Stradivarius.  (It was later used by violinist David Oistrakh in the 1960s and 1970s).

Marsick graduated with a gold medal from the Royal Conservatory of Music in Liège in 1865.  In 1871, he joined the newly established Société Nationale de Musique in and founded a string quartet.  He concertized extensively throughout and the and played with Joseph Joachim.  By the time of his visit to the Glessner house, he had been appointed a professor at the Paris Conservatory.
Posted by Glessner House Museum at 12:46 PM No comments:

The Life of Clara Schumann 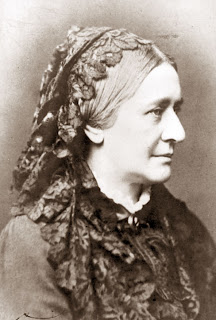 On at , will host a performance of Virtuoso: The Life of Clara Schumann in the recently restored parlor of the museum.  Schumann was regarded as one of the greatest concert pianists of the 19th century, and a champion of the work of her husband Robert Schumann, and their lifelong friend Johannes Brahms.  This performance of Virtuoso is adapted and performed by Betsey Means of WomanLore with a musical performance on the Glessners’ 1887 Steinway piano by Karen Berk Barak.  Prepaid reservations are required as seating is strictly limited, for tickets call . 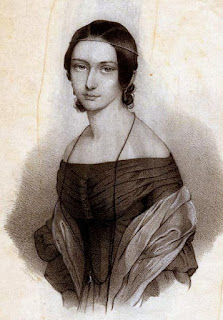 Clara Josephine Wieck was born in on to Friedrich Wieck, a well-respected music teacher, and Marianne (Tromlitz) Wieck, a famous singer in .  Her parents divorced when she was four years old and Clara remained with her father who trained her extensively, with the belief that she would become a child prodigy.  She began performing at an early age and in 1830, at the age of eleven, went on a concert tour of several European cities including .  She impressed the leading musicians of the day including Niccolo Paganini, Franz Liszt, Frederic Chopin, and many others.  After several months of concertizing in in 1837 and 1838, she was named a Royal and Imperial Chamber Virtuoso, the highest honor awarded to a musician in .  She was one of the first pianists to perform from memory, making that the standard for concertizing. 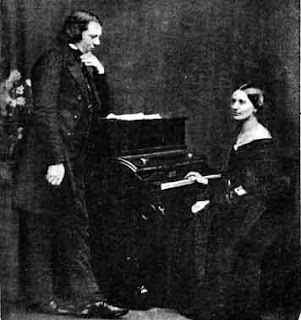 In 1840 she married the composer Robert Schumann, whom she had first met at the age of eight.  Schumann had lived in the Wieck household while taking lessons from her father.  Their marriage was one of the great love stories of all time and she devoted herself to her husband and eight children, largely abandoning concertizing, although she continued to compose.  Robert Schumann had severe mental difficulties and following a suicide attempt in 1854, was committed to an asylum where he died in 1856.

After his death, Clara Schumann moved to where she performed extensively, taught, and edited her late husband’s music and writings.  In 1878 she was appointed a teacher of piano at the Hoch Conservatory in , a post she held until 1892.  She made a total of 38 concert tours outside of , last performing in 1891 at the age of 72.  She died on in following a stroke and was interred beside her husband at the in . 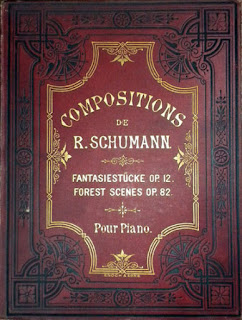 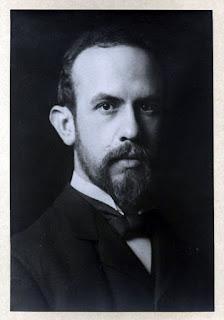 Excerpt from The Courier

The Democrats made a clean sweep in , a normally Republican town.  The Bull Moose vote was not large, but the defection from the Republicans was sufficient to destroy their supremacy.  The voters evidently started at the top to vote Democratic and got the habit so strong that they continued on down through the ticket.

A feature of the election that should not be overlooked was the unanimous election of John G. M. Glessner, who, though a Republican, had no Democratic opponent.  Mr. Glessner has done a great deal for and will continue to do so in the legislature.

knows how to recognize and reward her benefactors.  In the election of John G. M. Glessner by a unanimous vote they did the handsome and the proper thing by one who has already done the handsome thing for .

John G. M. Glessner (known as George by his family) began his term in the state legislature on .  He was reelected for three additional terms in 1915, 1925, and 1927.  During his time in the legislature he served as a member of the House Judiciary Committee and the Revision of Statutes Committee.  He also held the position of Secretary of the Board of State Institutions.

George Glessner died on in at the age of 57, less than two weeks after completing his fourth term in the legislature.
Posted by Glessner House Museum at 8:50 AM No comments: