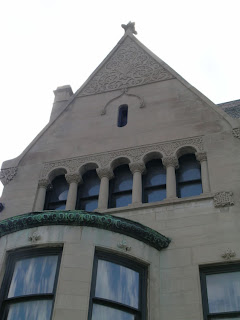 On , the Commission on Chicago Landmarks gave its final approval for the designation of the Harriet F. Rees house at 2110 S. Prairie Avenue as a Chicago landmark.  The house was designated for its exemplary architecture, as the work of a significant architect, and as an outstanding example of our city’s heritage.   The designation is good news for preservationists who were concerned about the future of the house.  Although it is in the hand of dedicated owners, who have spent several years restoring the structure, the building was threatened in recent years by plans to build a large hotel on the block to accommodate visitors to McCormick Place Convention Center, located one block to the south.   Landmark status adds an important level of protection to the structure, the last surviving mansion on the 2100 block of Prairie Avenue.
The elegant row house was built in 1888 for Harriet F. Rees, the 70-year-old widow of James H. Rees, a prominent early real estate dealer and land surveyor, primarily remembered today for the set of maps he created of the Chicago area in 1851.  The architects, Cobb & Frost, designed a significant number of homes in the Prairie Avenue neighborhood, most of which have been lost, except for the Joseph G. Coleman house at 1811 S. Prairie Avenue.   The Rees house was designed in the Romanesque style and features a smooth limestone façade highlighted with rich ornamentation at the front entryway, on the oriel window, around the third-story arcade, and most prominently in the steeply pitched gable.
After Rees died in the 1890s, the house was purchased by Edson Keith Jr. who had grown up in a house at 1906 S. Prairie Avenue (demolished).  His daughter Katherine was raised in the house and in 1916, became the wife of architect David Adler.  She also published two novels, The Girl and The Crystal Icicle, before her untimely death in 1930, the result of an auto accident while traveling with her husband in France.  In later years, the building housed furnished rooms, and during the 1970s was converted to the Prairie Avenue Café. 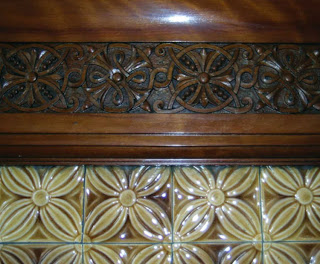 The interior is richly appointed and has survived largely intact, a pleasant surprise given its varied uses during the years.  Cobb & Frost designed an interesting moulding pattern that is used on the main staircase and around the doorways of many of the principal rooms.  The most prominent features however are the beautiful fireplaces which possess exceptionally fine tilework, each room being different.  The dining room fireplace is surrounded by a full wall of built in cabinets.
Near the rear of the first floor is the original hand-crank elevator, one of the first to be used in a private residence, no doubt installed for the widow for whom the house was built.
The interior of the house will be open for tours on Sunday as part of the annual Glessner House Museum fundraising tour, A Walk Through Time.  For further information, visit www.glessnerhouse.org.
Posted by Glessner House Museum at 11:39 AM