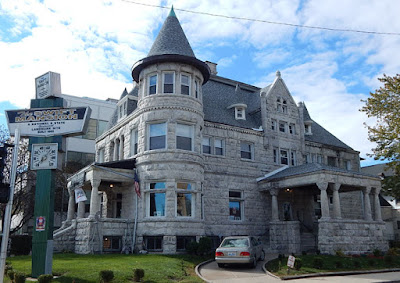 Like the Glessner house, the Swift mansion at 4500 South Michigan Avenue is a reminder of the period in the late 19th and early 20th centuries when the South Side was home to many of Chicago’s business and social leaders.  A rare survivor of that era, now set amidst apartment buildings, business blocks, and vacant lots, the mansion’s history reflects the changes that the community has undergone since it was constructed more than a century ago. 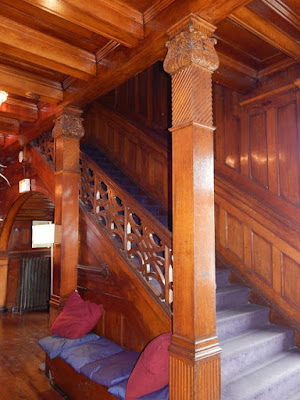 On October 2, 1890, Chicago newspapers carried a detailed account of the marriage of Helen Swift and Edward Morris, which had taken place the previous evening at the home of the bride’s parents, 4502 S. Emerald Avenue.  The event was not merely another society wedding – it represented the union of two of the most powerful families in Chicago.  At the time, Chicago was a meatpacking city, and the three largest businesses were operated by the Swift, Morris, and Armour families.  Helen was the daughter of Gustavus Swift and Edward was the son of Nelson Morris.  Swift presented his daughter with a check for $5,000 “with a goodly sum in gold coin to act as a weight for the paper” and the happy couple set off for an extended honeymoon in Europe. 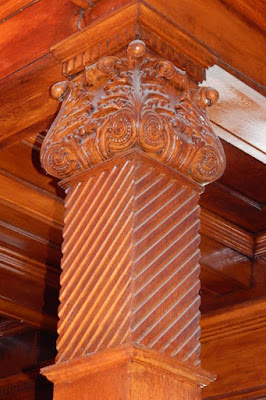 Swift planned another gift for his daughter and new son-in-law as well – a new house.  In 1892, plans were announced for a substantial marble-clad residence at the southwest corner of Michigan Avenue and 45th Street.  At the time, this portion of Michigan Avenue was lined with large mansions, set along what was considered one of the most beautiful streets in the entire city. 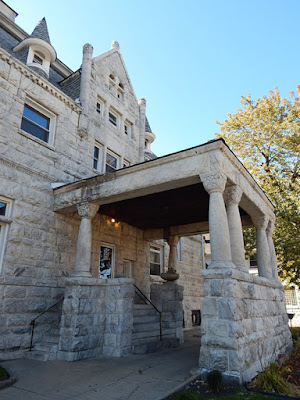 The exterior exhibits elements of both the Romanesque and Queen Anne styles and features columns with elaborately carved capitals, dormers, a three-storey turret, and a large porte cochere along 45th Street.  Inside the rooms were richly finished with wood paneling, beamed ceilings, a beautiful carved staircase, and numerous fireplaces. 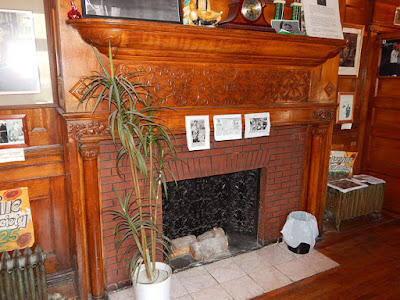 The architect of the house has not been confirmed, but the nomination form submitted when the building was listed on the National Register of Historic Places in 1978 indicated that the house may well have been the design of Willett & Pashley.  The partnership of James R. Willett and Alfred F. Pashley produced a number of distinctive residences in the city during that period.  Several of their published designs are very similar in scale and detail to the Swift mansion.  They are remembered today chiefly for their work with the Catholic Church in Chicago.  Willett befriended Patrick Feehan during the Civil War, and Feehan went on to become the first Archbishop of Chicago, serving from 1880 until 1902, during which time Chicago was elevated to an Archdiocese.  The firm designed his summer residence and St. Mary’s Training School for Boys, both located at “Feehanville” in present day Mount Prospect.  However, their most significant commission was the Archbishop’s elaborate Queen Anne style residence at 1555 N. State Street which still stands today. 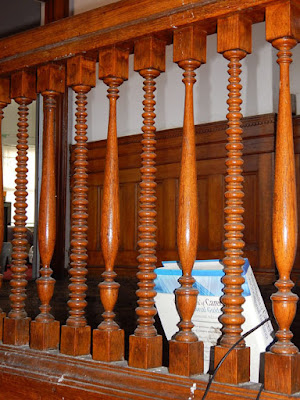 Helen and Edward Morris moved into their home just as Chicago was preparing to host the World’s Columbian Exposition in 1893.  Newspapers note that Mrs. Morris gave dances and other parties in her beautiful new home.  Four children were born to the couple, two sons – Nelson II and Edward Jr., and two daughters – Ruth and Muriel.  In 1904, Edward Morris purchased a large lot, measuring 198 by 212 feet at the southwest corner of Drexel Boulevard and 48th Street, and spent nearly $100,000 building a new home, designed by Howard Van Doren Shaw.  It was here that he died on November 3, 1913 at the age of 47, leaving an estate estimated at $20,000,000.  Helen later married Francis Neilson, an English actor, and died in 1945. 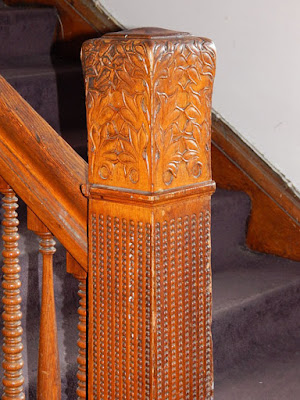 After Helen and Edward Morris moved from their Michigan Avenue home, it was given to her brother Herbert and his wife, who died in 1911 and 1912 respectively.   The house was then acquired by John W. White.

When he died in 1916, the Chicago Tribune gave an extensive account of the contents of the house when it was opened by the public administrator.

A “tomb” of art curios in musty surroundings was revealed yesterday when the house of the late John W. White, recluse and connoisseur, was opened by the public administrator, James. F. Bishop.

In the old house, 4500 Michigan avenue, there hung what is pronounced a Gainsborough.  A cathedral clock was standing among Roman bronzes and Italian marbles.  Violins of a bygone age reposed on teakwood carvings.

Mr. White died recently at the age of 75.  He had been ailing for more than a year.  So far as is known he had but one relative.  She is his daughter, the wife of Dr. Charles Chesman of Seattle, Wash., and she is coming to Chicago to close up the estate.

P. H. O’Donnell who for years was the legal adviser to Mr. White, described the art objects that adorn the lonely house which Administrator Bishop now has in charge.

“Mr. White was a man of genius,” said Mr. O’Donnell.  “He was a native of Kansas and at the time of his death had interests in Lyon, Kas.  He had held offices of trust and was a lawyer of ability.  He came to Chicago about fifteen years ago and established the Bankers’ Record Publishing house.  It netted Mr. White and his associates large returns.

“He was intent upon making money only that he might gratify his desires to possess objects of art.  He bought the old Herbert Swift mansion at 4500 Michigan avenue that he might have a model home on his own ideas.  He lived alone.

“So far as I know, no one but myself ever entered his home as a guest.  He employed an old man as a bodyguard and who came in once a day and attended to the housework.  The entire lower floor was given over to his art collection.  This extended to every form of rare object.  He was fond of violas and cellos.  Of these he had about a half dozen of rare make.

“There is a piano which he bought in Germany for $10,000.  It is capable of reproducing the tones of almost every instrument ever made.  Mr. White brought it to American that American piano makers might study it.

“There is a collection of cathedral clocks.  They are all huge, hand carved and wrought.  When Mr. White had them all running they would reproduce for him the chimes heard in the cathedrals of Europe.  One of these clocks alone had twenty-eight chimes.  The clock collection cost more than $100,000.

“Along the walls are pieces of Roman statuary.  One of these is an interlacing of marble and bronze of surpassing handiwork.  He had no American paintings.  All the ten or fifteen paintings are old works, none more modern than a Gainsborough.  There is a room full of paintings, Japanese teakwood carvings, and Japanese vases of great value.

“The rosewood bedroom set used by Mr. White was hand carved and made for the late John Alexander Dowie, overseer of Zion.  Mr. White bought it after the death of the prophet.

“In the great room of the first floor is the cabinet of Otto, the ‘mad king’ of Bavaria.  It was brought to America by Mr. White years ago.  It is hand carved and opens in a peculiar fashion.

“All doors to the house are of oak and heavily barred.  The windows are all double barred.  Mr. White liked to be alone with his collection.  His companion was a little dog that always was with him.

“At the same time he was extremely fond of children and he bought a large sweep of lawn to the south of the mansion which he planned to make into a playground.  He already had expended $10,000 in preliminary work on it.

“It would be too bad to permit this collection of art to be thrown broadcast in an auction sale.  It should become the property of the city of Chicago.  There should be a corner for the collection in the Art Institute.”

Mr. White died alone, save the little dog that was always with him.

Public Administrator Bishop, under the law, where one dies intestate, forced an entry to the house to prepare for the disposal of the property.  This, however, will not be done, as Mr. White’s daughter will soon be in Chicago. 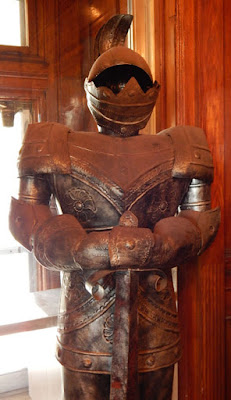 A suit of armor inside the front door greets visitors.
Is this a survivor from the White collection?

After White’s collection was cleared from the house, it was sold and occupied by various individuals including John Powers, who served for nearly 40 years as an Alderman in the City of Chicago.  The house was later used as a funeral home.

For decades following, the mansion served as the headquarters of the Chicago Urban League.  In 1995, it was acquired by the Inner City Youth and Adult Foundation, which occupies the building today. 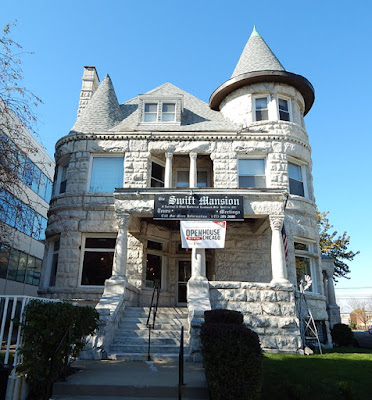 The Foundation, which provides many services to the community including transitional housing to formerly incarcerated men, graciously opened its doors for curious visitors during Open House Chicago, sponsored by the Chicago Architecture Foundation over the weekend of October 17th and 18th.  Tours were provided by the residents, who proudly shared their home with the throngs of visitors who came to view this relic of Chicago’s early South Side Gold Coast.
Posted by Glessner House Museum at 5:28 PM