The Story of a Coffeepot 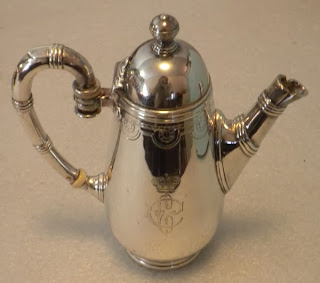 Among the silver objects placed on display in the newly opened dining room silver closet is a small unassuming coffeepot.  However, the piece is among the most important pieces of silver in the collection, and one that was of particular significance to the Glessners, who acquired it for its direct connection to a decisive battle during the Spanish-American War. 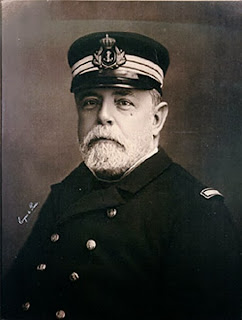 The Battle of Santiago de Cuba took place on July 3, 1898.  It was the largest naval engagement of the Spanish-American War and brought about the destruction of the Spanish Navy in the Caribbean, and ultimately the end of Spain’s presence in the New World.  Admiral Pascual Cervera  y Topete headed the operation aboard his flagship, the armored cruiser Infanta Maria Teresa.  The other ships in the squadron were the armored cruisers Vizcaya, Cristóbal Colón, and Almirante Oquendo, and two torpedo-boat destroyers, Furor and Pluton. 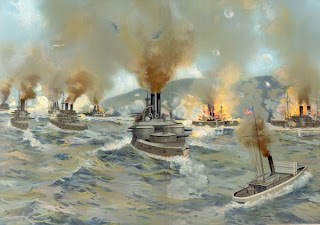 On April 30, 1898, Admiral Cervera set steam from São Vicente in the Cape Verde Islands, headed for San Juan, Puerto Rico.  By the time the squadron arrived in the Caribbean, San Juan was under a U.S. Navy blockade, so it headed for Santiago de Cuba on the southeastern coast of Cuba, arriving on May 19.  An American squadron arrived on May 27 and began a blockade that would last more than five weeks.  Cervera planned for the squadron to break through the blockade in the early hours of Sunday July 3, 1898.  A battle commenced almost immediately but within an hour, five of the six ships in the Spanish Caribbean Squadron had been destroyed or forced aground. 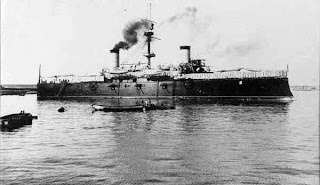 Only the Cristóbal Colón, the fastest ship in either fleet, survived, but she was at a serious disadvantage as her main 10-inch turrets were empty, the guns not having been installed before she set sail for the Caribbean.  For more than an hour she was pursued by the battleship Oregon, and eventually Captain Emilio Diaz Moreu turned the Cristóbal Colón toward land and ran her aground.  Her descending flag marked the end of Spain’s naval power in the New World.  The sailors either made it ashore or were rescued by American sailors.  Later that night, during a salvage attempt by the U.S. Navy, the cruiser capsized and sank.

By December 1898, the Glessners became aware of a coffeepot from the official silver service of the Cristóbal Colón which was available for purchase at the Deakin's Art Rooms in the Fine Arts Building, a dealer from whom they frequently made purchases.  On December 24th, H. Deakin wrote to Mrs. Glessner that he was in the process of obtaining the necessary documents to substantiate the authenticity of the coffeepot.   His letter states in part: 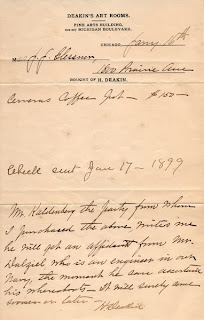 An invoice from Deakin dated January 16, 1899 shows that the Glessners purchased the coffeepot for $150, quite a large sum for the day.  In early February, Deakin sent Mrs. Glessner an affidavit from F. R. Kaldenberg which stated:

“I hereby assert under oath that shortly after the Naval conflict before Santiago Cuba between our forces and the Spanish when the Prisoners of War were brought to Portsmouth N.H. under the charge of our Naval officers and other officials there was among them a U. S. Medical man named J. M. Dalziel duly commissioned as such, this man had procured a certain silver coffee pot, upon which is engraved the monogram C.C. = “Christofer Colon” = said coffee pot being part of the silver service on the Man of War Christobal Colon, and captured by our forces, upon the ending of service at Portsmouth of said Dalziel he came to N.Y. and gave me the coffee pot, and in turn I gave it to Mr. H. Deakin, that said Dalziel thereafter went into service of the Cutting family at Oak Point L.I. where he treated the sick soldiers, known as Rough Riders and remained with them until all were well enough to go to their respective homes, and I further affirm and solemnly swear to the fact, that no possible doubt can exist of the truth of Dalziel’s or my statement.”

The final correspondence regarding the coffeepot is another letter from F. R. Kaldenberg dated December 15, 1899 where he states that he has been unable to contact Mr. Dalziel in order to get a statement from him:

“He spoke of going to Manilla (sic), if I meet him again I will hand him your letter, if you want his portrait I will send it to you for $2.00 which I paid him.  I do not care to sell this picture, it is a group of sick soldiers on the lawn and villa of Mrs. Cutting, the various Doctors and Nurses as well as Mrs. Cutting her son and others of the family.  You can have a copy made from this if it interests you.”

The Glessners took great pride in the piece, and it is one of the objects they owned that is specifically mentioned in John Glessner’s The Story of a House:

“There is the silver coffee-pot, a part of the official plate of the Spanish Admiral Cerveza’s flagship, Christobal Colon, sunk at the battle of Santiago bay on July 3, 1898, and recovered by a sailor of the American fleet, sold by him to a Navy surgeon, and thence to me . . .”

The coffeepot itself is of tapering form with a scrolling rope decoration, surmounted with a spherical finial.  The handle and spout have banded decoration and the handle has two narrow ivory insulators.  The monogram “CC” for Cristóbal Colón is engraved on one side, beneath the Spanish crown.  The base is inscribed:

“From the official table service of the Christobal Colon, Flagship of the Spanish Admiral Cervera, Captured at the Battle of Santiago, July 3d, 1898.”

(As has been stated above, the Cristóbal Colón was not Cervera’s flagship).

The maker’s mark on the underside reads “Broggi 18,” a reference to the prominent Italian silver firm Broggi, which dates back to 1818 in Milan.  The company supplied several of the royal houses of Europe and later many of the luxury cruise ships, including the Andrea Doria.  However it has been suggested that the piece may have been made in Hanau, Germany.  Silver makers in that town frequently used marks from other makers on their pieces.  Further research would need to be undertaken to verify the actual maker.