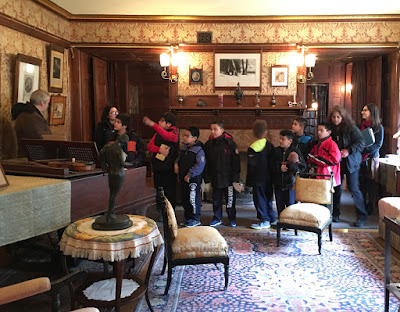 The program also encourages observation and analysis of buildings and furnishings; compares late 19th- and early 20th-century life with today; and demonstrates what the students have learned through a variety of hands-on activities.  A PowerPoint presentation sent to the teacher ahead of time prepares students with background on the house and the various people connected with it, including Glessner family members, the architect Henry Hobson Richardson, and members of the live-in staff.

Students walked around the exterior of the building noting such details as building materials (granite, limestone, brick, clay tile roof tiles, etc.), placement and number of windows and doors, and thinking about why the house looked so different from others on Prairie Avenue at the time.  They looked for details including the pair of carved granite ouroboros on the façade and where the architect’s monogram can be found.  The carriage drive introduced the eight servants who lived in the house, and how their living and working spaces were separated from those of the family.

A favorite room in the house was the schoolroom designed for the Glessners’ two children, George and Fanny.  Students indicated whether or not they would like to be homeschooled.  They had the opportunity here for a few hands-on activities including tapping a telegraph (just like one George kept in the room), hearing it buzz and learning how Morse code allowed George to send messages to his friends – an early form of texting as they said!  Students were also able to use stereoscopes to see 3-D images on antique stereoview cards.

Coming into the main hall, students had the opportunity to explore the many types of objects the family collected including ceramics and glass, as well as carved furniture, and textiles with a variety of patterns including dragons.  They enjoyed hearing how the Glessner grandchildren would slide down the bannister of the main staircase and try to land on the main hall carpet in the center medallion, which they referred to as the “blueberry pie.”  Many of the students quickly recognized the portrait of the “big” architect – H. H. Richardson – that the Glessners always displayed in the main hall.

In the master bedroom they saw several pieces of hand-carved furniture made the Glessners’ good friend Isaac Scott.  They asked about the fireplace and why there was coal in this fireplace, as opposed to wood in the main hall fireplace.

The library introduced students to the Glessners’ large collection of books of which nearly 3,000 are still on the shelves today.  They learned how important learning was to the family, and how Frances Glessner held a weekly Monday Morning Reading Class for her friends in the room for over 35 years.  All agreed that the enormous partner’s desk in the middle of the room was the biggest desk they had ever seen, and there were mixed reactions to the bronze life mask and hands of Abraham Lincoln.

Upon reaching the parlor, students “found” the large Steinway piano they had seen in the PowerPoint presentation in class and marveled at the intricately detailed birds on the hand-painted canvas wallcovering.  The dining room introduced the idea of the extension table and how the room was shaped to accommodate it when fully opened.  They were able to peak inside the silver closet to see pieces that Frances Glessner made by hand, and they learned about the dinner parties where it took nearly three hours to serve and consume the eight-course meal.

The kitchen proved to be one of the most popular spaces in the house (and not just because of all the fake food).  Students were asked why the specific materials on the floor and walls were used, and what items were absent that they have in their kitchen at home.  They also enjoyed seeing the annunciator and learned how family and guests could call for a servant from anywhere in the house.  In returning to the coach house, they had the opportunity to walk through the large cold closet or icebox and see how the Glessners had a window put in there to help keep food cold in the winter. 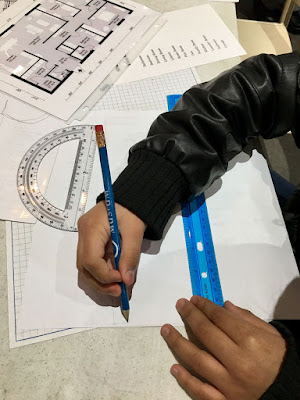 Returning to the coach house, where the tour began, students were directed to several options for hands-on activities.  At the journaling table, they were given a series of questions, and they could record their favorite memories of the tours in writing or by drawing pictures.  A second table showed floorplans and using graph paper, the students were able to sketch out the configuration and types of rooms they would like to have in their own dream house. 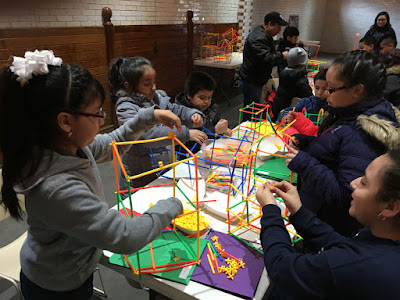 The most popular activity involved brightly-colored straws and connectors to create inventive structures.

Before departing for the day, the students gathered on and around the curved porch in the courtyard, recreating the famous 1902 picture of Frances Glessner’s Monday Morning Reading Class.  A folder of materials provided further activities once back in the classroom including a word search and crossword puzzle containing terms learned during the tour, a floor plan of the house, and a Morse code message to decipher. 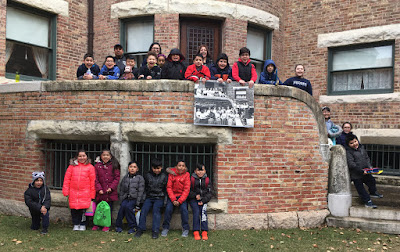 An enjoyable time was had by all – students, teacher, chaperones, docents, and staff!