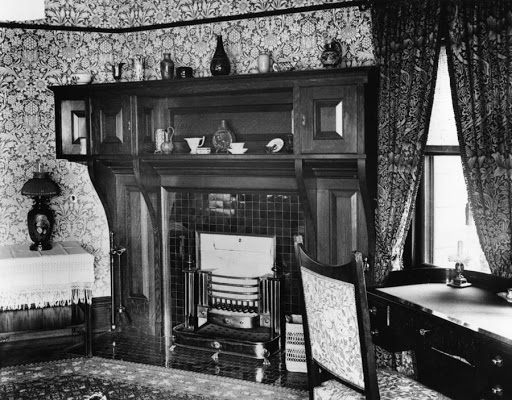 The use of a wide range of products from Morris & Co., selected by Frances Glessner to decorate her new home in 1887, is an essential factor when considering her design aesthetic. Surviving photos of the Glessners’ previous home show no evidence of Morris’s products being used there, despite her awareness and interest in Morris as early as 1883. As such, Morris & Co. became a virtual partner with Richardson – the architecture and interior furnishings complementing and enriching each other to form a unified whole. This was a basic concept that Frances Glessner and H. H. Richardson both read about in Morris’s writings on architecture just a few years before Glessner house came into being.

In this third and final installment of our series on William Morris and Glessner House, we will explore the range of products used throughout the house. There are far too many to explore in a single article; instead, we will look at one example of each of the major categories of items produced by Morris & Co. - wallpapers, textiles, and carpets.

Perhaps no product line of Morris & Co. is more associated with the name of William Morris to this day than wallpaper. Morris introduced his first designs in the early 1860s, a period in which wallpaper was almost universal in the homes of all who could afford it. Although Morris’s wallpapers were printed using the traditional wood-block process, the designs themselves were far from traditional and marked a gradual shift away from the French realistic papers to those categorized as “reform” papers. At the same time, Morris helped to elevate the status of English wallpapers to one of international prominence, and he directly influenced other designers to the point where the term “Morrisonian” was used to describe all wallpapers created in “his” style.

A total of seven Morris wallpaper designs were used at Glessner house. Upon completion of the house in 1887, both guestrooms as well as the bedrooms of George and Fanny, were all papered with Morris designs. Installation of electrical wiring in 1892 resulted in all the rooms being repapered, with the two guestrooms receiving different Morris designs, in both cases ones that were much lighter in color. At the same time, the Glessners’ bedroom, originally decorated with a non-Morris paper, received its Morris wallpaper. After that, when the rooms were repapered, the same Morris pattern was always reused. The wallpapers were acquired through the Chicago-based decorating firm of John J. McGrath, which began carrying Morris & Co. wallpapers as early as 1876.

Of particular interest is the Double Bough wallpaper, installed in the corner guestroom after the electrical wiring project was completed. Although several people created wallpaper designs for Morris & Co., this particular pattern is attributed to William Morris himself, and dates to 1890. This date is interesting because the wallpaper would not have been available when Glessner house was completed in 1887 but was available when the repapering was undertaken. This might explain its sudden appearance – Frances Glessner saw the new design, liked it, and found a way to work it into her home. It was used again when the room was repapered in 1916.

In 2010, when the room was being readied for restoration, a large piece of the Double Bough wallpaper was found behind vinyl wallcovering installed in the early 1970s. It was carefully removed from the walls by historic finishes expert Robert Furhoff and preserved. The fragment was of great value as it verified the colorway of the wallpaper. As was the case with most Morris & Co. wallpapers, Double Bough was offered in several colorways, and since the historic photos are all black and white, a surviving fragment is essential to recreate the wallpaper correctly. 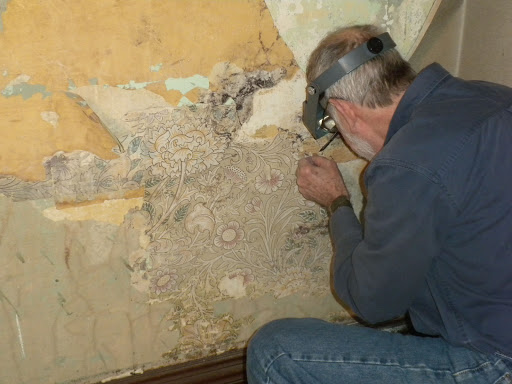 The complete set of carved wood blocks was on hand at the Morris archives in England and were used to print the current paper, installed in 2015. The process was laborious, as the paper must be given time to dry in between the application of each block. For this particular design, 21 blocks were needed; some designs required as many as 30. 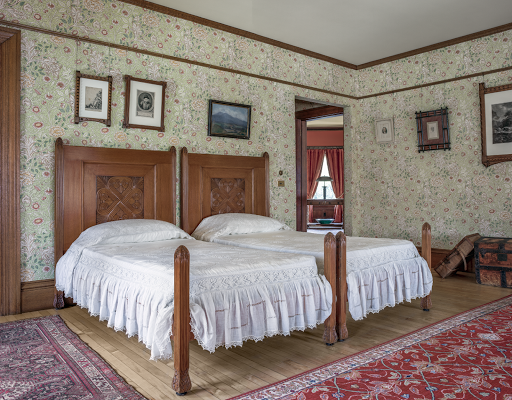 Today, four of the five bedrooms feature exact copies of their Morris & Co. wallpapers – Double Bough and Arcadia in the guestrooms, and Poppy and Blossom in the children’s bedrooms.

Textiles represented a huge category of products for Morris & Co. including everything from woven woolens and printed cottons used for draperies and upholstery, to embroidered textiles and tapestries. Historic photographs of Glessner house show no less than nine rooms that featured at least one Morris textile, often used for draperies and portieres, but also for upholstered furniture and bed coverings. Fanny’s bedroom, for example, just reopened after an extensive restoration, features different Morris & Co. textiles for the draperies, upholstery, and embroidered bed covering.

Perhaps the most widely used textile in the house is one that is often overlooked. Known as Utrecht Velvet, the stamped woolen plush fabric appears in historic photos covering chairs in the library and upper hall, and on the davenport sofas in both the library and the schoolroom (after its conversion to a sitting room). Developed in about 1871, it is based on stamped velvets first produced during the 17th- and 18th-centuries in the Low Countries. The monochromatic design consisted of a bold, stylized pattern of flowers and foliage, the repeat being 26 inches in diameter. 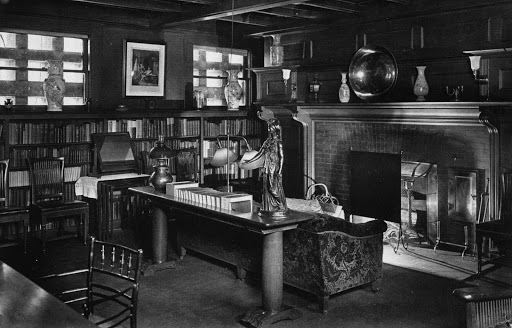 Unlike many of the Morris & Co. textiles, it was not actually produced by the firm, but was contracted out to a firm that produced woolen goods. It was available in at least fourteen colorways. The surviving example of Utrecht Velvet can be found on the seats of a pair of Chippendale style side chairs in the second-floor hall, attributed to A. H. Davenport & Co. It was produced in a rich red color, although it is believed that a green version of the fabric was used in the library. (Fun fact: The fabric remained popular well after the turn of the 20th century and was used as a wallcovering for at least one of the first-class cabins on the R.M.S. Titanic). 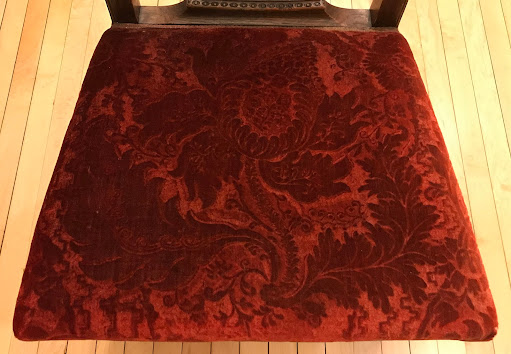 Reproductions of Morris & Co. textiles can currently be found in the main hall (both levels), library, parlor, and four of the five bedrooms. An original pair of drapery panels in the Cross Twigs design is stored in the archives, the exact location of its use in the house has not been determined.

Morris & Co. produced numerous carpet designs through the years which can be divided into two categories – machine-woven and hand-knotted. Although Morris generally eschewed the use of the machine, he started designing an extensive line of machine-woven carpets in 1876; several can be seen in the historic photos of Glessner house. In 2013, one of his earliest and most popular machine-woven carpets, Lily, was reproduced and reinstalled in its original location on the main entry stairs leading up to the main hall from the front door.

It is the hand-knotted Hammersmith rug in the main hall itself that is most worthy of note. Frances Glessner wrote about its selection in a journal entry recording the arrival of architect Charles Coolidge on April 19, 1887:

“Tuesday Mr. Coolidge came. He and John spent the morning at the house and came home late to lunch. We spent the afternoon at Field’s looking over rugs and hangings – we selected for the parlor and hall – Morris rug and hangings for the hall, and Morris silks for the parlor. Mr. C. was enthusiastic over our Morris rug. In the evening we talked furnishings and showed him all the things we have gathered up for the house.” 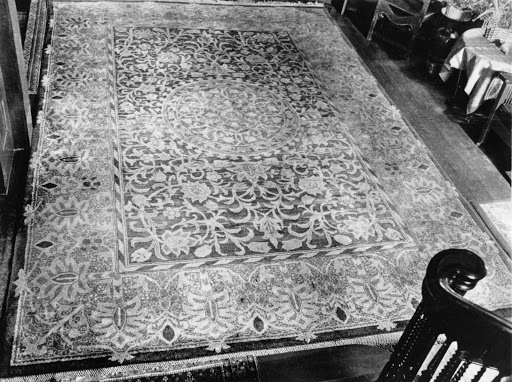 The hand-knotted carpets were extremely labor intensive to produce, and were therefore very costly, so Coolidge’s enthusiasm over the rug is no surprise. An advertisement in the Chicago Tribune that same year promoted the rug department at Marshall Field & Co., considered one of the best in the country. The advertisement specifically noted that Field’s had an exclusive contract “for the entire West” for the “wonderous Hammersmith rugs designed and made under the personal supervision of William Morris.” 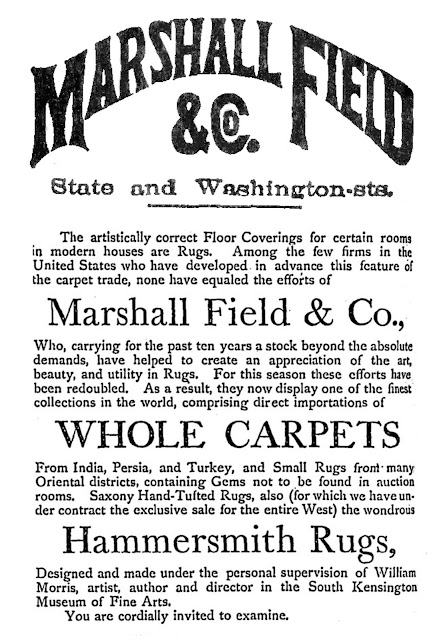 Morris was an expert on, and collector of, rugs from Persia, Turkey, and China, advising the South Kensington Museum (now the Victoria & Albert) on acquisitions, and offering advice to Richardson on a carpet during their meeting in 1882. The carpet produced for the Glessners is very similar to one that Morris designed about 1883 for Swan House, the London home of Wickham Flower, a prominent solicitor. It is based on a typical 17th-century Persian medallion carpet and features a broad border of stylized palmettes, inspired by 16th- and 17th-century Turkish cut velvets, of which Morris would have also been familiar.

The original carpet, which measures nearly 11’ x 15.5’, was donated to the Art Institute of Chicago in 1974 by the Glessners’ granddaughter, Martha Batchelder. A close approximation of the original, assembled from machine made carpeting replicating both the field and border, was installed in the main hall in 2014. 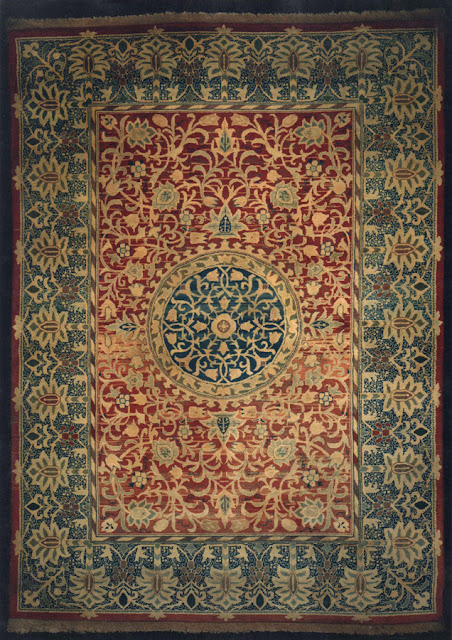 This concludes our three-part series on William Morris and the significant presence of his designs at Glessner House. There is much to see, we hope you will visit soon!