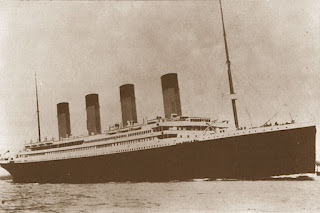 Yesterday, , marked the 100th anniversary of the sinking of the Titanic.  In the Glessner journal for the following week, John Glessner noted that two of their friends – Arthur Ryerson and Lizzie Isham – were among the 1,500 victims of the disaster.
ARTHUR RYERSON
The story of Arthur Ryerson is among the most tragic of all the victims on the Titanic.  Ryerson, who was 61 at the time of his death, was a son of Joseph T. Ryerson, founder of J. T. Ryerson & Company, iron and steel merchants.  He was an attorney in the firm of Isham, Lincoln and Beale (see information on Isham below) but in 1905 had moved his family to the East Coast, maintaining close social ties to .  Ryerson, his wife, and three of their five children had traveled to earlier in 1912 for an extended stay.  Shortly after taking a house at for two months, Ryerson learned that his eldest son, Arthur Jr., age 20, had been killed in an automobile accident.  The family immediately started for the , embarking on the first steamship available – the Titanic - which they boarded at on April 10.   As they were in mourning, the family remained in their cabin virtually the entire time they were aboard.  On April 18, when Mrs. Ryerson arrived in aboard the RMS Carpathia with her three daughters, she now planned a memorial service for her husband (whose body was never recovered) in addition to a funeral for her son.
ELIZABETH ISHAM
Ann Elizabeth Isham, known as Elizabeth or Lizzie, was born in 1862, and was 50 years old at the time she perished.  Ann’s father, Edward Swift Isham was a prominent attorney and was a partner with Robert Todd Lincoln in the firm of Isham, Lincoln and Beale.  Fellow passenger Arthur Ryerson (see above) was a partner in the firm.  Ann was a member of Second Presbyterian Church, as were her mother and sister.  In 1903, Ann Isham moved to and spent most of her time living with her sister Frances (Mrs. Harry Shelton) in .  On she boarded the Titanic at , traveling to the to spend the summer with her brother Edward in .  Tragically, Ann Isham was one of four first class women who died in the disaster.  Her body, if recovered, was never identified.  The family erected a memorial to her in , where they maintained their summer estate, Ormsby Hill.  The exact reason why Ann Isham did not survive has never conclusively been determined.  It has long been speculated however, that she refused to leave her Great Dane behind, one account even stating that she was safely on a lifeboat and jumped back onto the Titanic to be with her beloved pet.  A woman was observed to have her arms frozen around her dog in the water following the sinking, but it is not known if the woman was Ann Isham.
Posted by Glessner House Museum at 11:14 AM