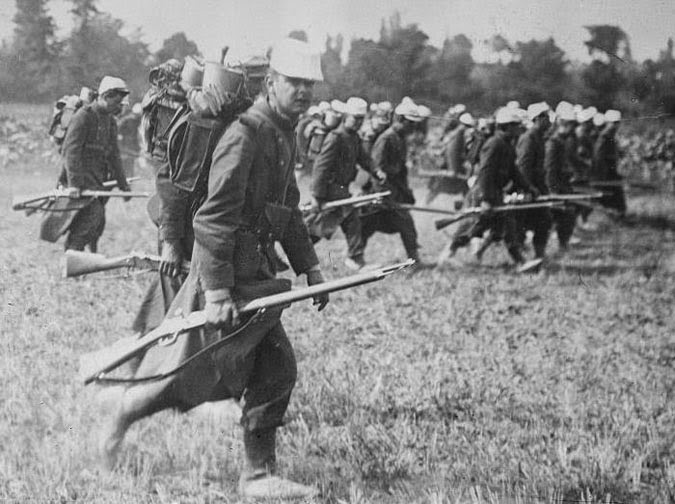 Serbian troops at the outbreak of the war

Today marks the 100th anniversary of the start of World War I, known at the time as the World War or the Great War, or in the United States initially as the European War.  Triggered by the assassination of Archduke Franz Ferdinand of Austria one month earlier, the conflict began on July 28th when the Austro-Hungarians fired the first shots in anticipation of their invasion of Serbia.   By the time of the armistice on November 11, 1918, more than 16 million soldiers and civilians had been killed and four empires – German, Russian, Ottoman, and Austro-Hungarian – ceased to exist.

The Glessner journal, by this time being written by John Glessner, contains numerous references to the start of the war, as well as letters from friends and family who were in Europe at the time.  We present a few excerpts to provide insight to the reactions of these individuals, who, of course, had no way of knowing they were witnessing the beginnings of a war that would last more than four years. 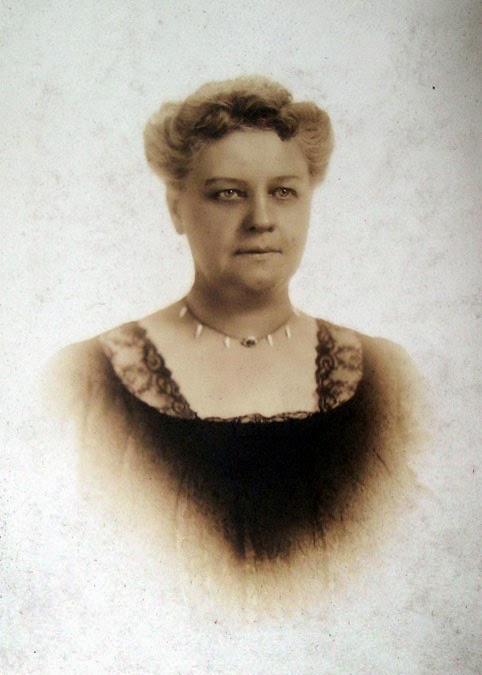 The first letter was written from Milan, Italy on August 2, 1914 by Nathalie Sieboth Kennedy, the paid reader for Mrs. Glessner’s Monday Morning Reading Class.   She wrote, in part:

“We were ordered out of Austria yesterday, and after a pretty rough journey arrived here where everything is still at peace, but we are told we cannot go on to Switzerland as we expected to do.  I feel that we are safe personally, having our passports and being American citizens, but that is about all I am sure of.  Every man in Austria was ordered to report for service: every waiter, every porter, every proprietor under old age.  Even the horses were requisitioned and we had to walk to the station and have our luggage carried by hand.  The scenes of confusion were indescribable at the station, as they had been for two days in the town.  All the women had red eyes from weeping, and the departing men were sad and serious. . . So far, Italy has not taken steps to break her neutrality but, of course, she is the ally of Austria and Germany, and may be made to maintain it.  Tomorrow morning we shall consult the American consul as to what we had better do.” 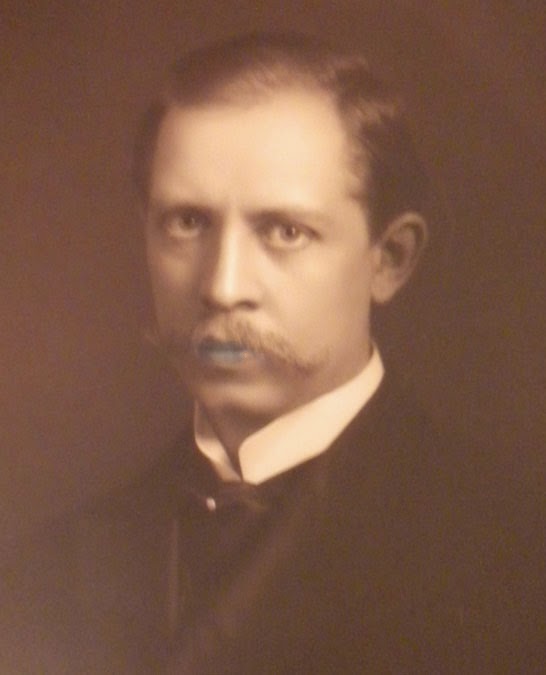 The Glessners also received several letters from their dear friend Frederick Stock, conductor of the Chicago Symphony Orchestra, who was returning from Europe when the war broke out.  Stock was most apprehensive because his wife and daughter Vera were still in Europe and he worried for their safety.  The war would have an enormous impact on Stock’s life and career.  He was still a German citizen, and in the wave of anti-German feelings that swelled as the war progressed, he was ultimately forced to step down as conductor of the orchestra in 1918 when numerous patrons and supporters made it clear they did not wish to support an orchestra led by a German conductor.

In a letter to Mrs. Glessner, written in Boston and dating to early August 1914, Stock noted:

“Up to the present I am still without any definite news regarding Mrs. Stock and Vera’s whereabouts; I presume that they are in Switzerland, and hope they are, because there they would be fairly comfortable and safe.  I tried to get in touch with them through my music agent in Berlin, sent several cables to different places in Switzerland, etc. etc. but so far no reply has reached me.  I hope everything is all right with them. . . It will take a few more days for me to get over one of the worst experiences I ever faced, and this, together with an overdose of anxiety and disappointment has put my mind into a rather gloomy frame.  I feel as ‘blue’ and sad as the saddest of all ‘poles’, our good friend Paderewski, for I am afraid that the end of the German Empire is at hand.”

In a letter dated August 29 from the Hotel Puritan in Boston, Stock notified Mrs. Glessner that he had received word that his wife and daughter were safe and hoped to sail shortly for the U.S.:

“Let me begin this by telling you that at last I have had news from Mrs. Stock; a cable arrived yesterday, notifying me that they expect to sail from Rotterdam, that they were in need of money, which she wanted me to cable to her care of American Express co., Rotterdam.  I think that they will try to sail from Rotterdam at first chance, and I am glad of it.  Isn’t this war the most frightful thing imaginable, and does it not seem to get worse from day to day!  What will the end be!”

Other letters reported the return of various members of the symphony, many of whom had travelled to Europe for the summer.  The good news of the safe return of Mrs. Stock and daughter Vera was conveyed to Mrs. Glessner in a letter from New York City dated October 3:

“Just a line or two to say that Mrs. Stock and Vera arrived yesterday from Rotterdam; they both look well, and of course are more than glad to be back again; both send their best wishes to you and Mr. Glessner and regret very much that the delayed arrival makes it impossible for them to pay you a visit at The Rocks, as they very much should like to do. . .  They suffered but very little inconveniences in Europe on account of the war, and could not tell me enough of the wonderful spirit among the German people in all the towns they passed through on their way to Rotterdam.  In Cologne, for instance, they were having concerts, opera, everything quite as usual, people crowded restaurants and cafes, and there was nothing else but the greatest confidence and enthusiasm for the German cause, and they were greatly surprised over the attitude of our American newspapers, which they cannot understand.  Let’s hope that the whole business soon will end, one way or the other, it’s a terrible strain on ones nerves.” 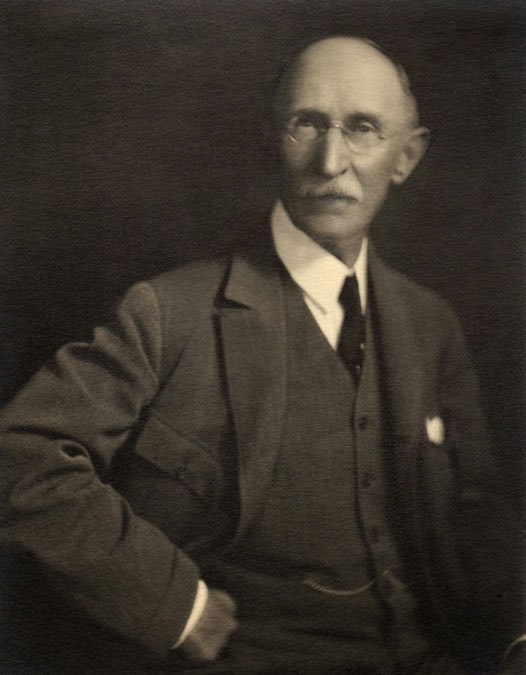 John Glessner’s brother, George, was staying at the Hotel Konigsvilla in Carlsbad, Austria when war broke out.  In a letter dated July 29, just one day after the war began, he reported:

“The announcement of Austria’s position towards Serbia, and the calling out of the Bohemian troops on Sunday last, together with Cook & Sons bulletin especially, Monday afternoon that trains for Berlin and Vienna would cease on Wednesday 29th, and for Paris and also to Ostend (the latter our route and for which our tickets have been purchased for leaving Aug. 6th to London), on Thursday the 30th, threw Frank into quite a panic and he was for immediately getting out of town, or into Germany, the very next day and out of this country, and to England as soon as possible.  My arguments to the contrary did not avail much . . . If matters came to the worst my suggestion was to get Mr. Chalmers to send us and our trunks in his automobile, if necessary, to Eger, 15 to 25 miles off – which is on the border and in Germany – where we get our through train anyhow, or hire a machine to do it.  It seems that, to mobilize the Austrian and Bohemian troops etc. it is necessary to annul the passenger trains for 2-3 or 4 days.”

George Glessner was still in Carlsbad as of August 12 when he wrote a letter to his other brother, William:

“We are still unable to leave here, and, if we could, would not know where to go for probably every seaport is now closed, or, would be, if we could reach any of them soon. . . Our present hope of leaving Europe and going home depends upon what arrangements the American Government can make with the different countries to open some free ports for ships to sail under the American flag – which ships it must send over for us – and also obtain railroad service and safe conduct of us Americans through to some open port to take us home.  For 10 days or more all the railroads have been used almost entirely for the mobilization of troops, but that must be nearly finished now.  Our Consul, the Ambassadors at Berlin and Vienna have tried, but, so far failed, to charter or get special trains to take the Americans to some open ports.  Pass this letter on to brother John when you have read it.”

A newspaper clipping from the Ohio newspaper, the Springfield Daily Sun, dated August 22, 1914, pasted into the journal, indicated that George Glessner was still in Carlsbad as of that date.  The headline of the article reads:

The report was provided by William J. Chalmers of Chicago, mentioned in George Glessner’s letter above, who arrived in London on August 21 after a sixteen day motor trip from Carlsbad to Buch.  After a lengthy description of his harrowing journey, the article concludes with the following:

“George Glessner, of this city, who is said to be in Carlsbad, according to William J. Chalmers, makes his home at the Arcade hotel.  At one time he was a member of the Warder, Bushnell and Glessner company.  For some time he has been travelling abroad.”

“This is the day we expected to arrive in Boston on the S.S. Amerika, but we now hope to sail next Saturday, the 5th, on the Menominee of the Atlantic Transport Line – a small 5800 ton steamer, slow, but considered a good, safe, smooth-sailing vessel – leaving Tillbury Docks on the Thames and landing in New York in about 10 days time.  All cabins are called first-class.  Most of the steamers of this line carry cattle, and consequently are steady, and have only first class cabins.” 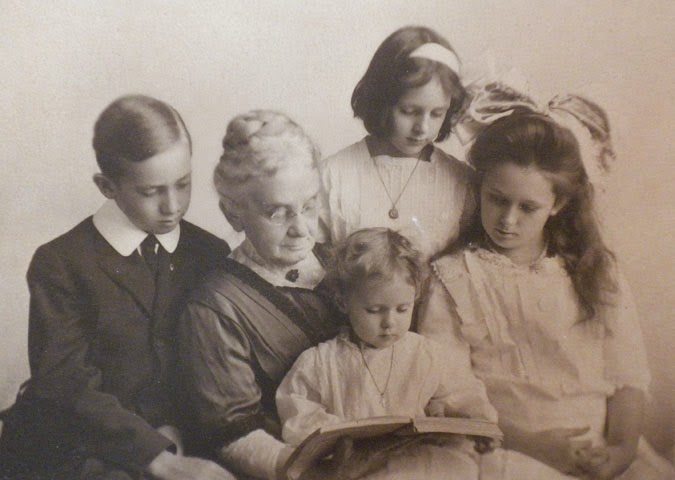 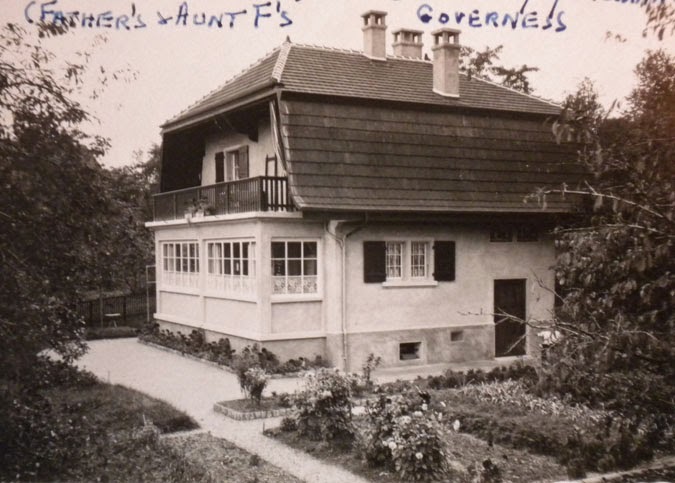 Perhaps the Glessners’ greatest concern was for their 14-year-old granddaughter, Elizabeth Glessner, who had gone to spend the summer in Switzerland with Violette Scharff, Fanny's paid companion in the 1880s and 1890s.  Elizabeth and Miss Scharff sailed from New York on July 2, 1914.  There are no letters from Elizabeth, so not as much is known about how the war impacted her stay in Switzerland, but a journal entry dated August 27 indicated “Word came that Elizabeth would sail from Rotterdam for home on Saturday.”  On September 3, John Glessner noted “Alice and Mrs. Hamlin (her mother) went to New York by train to meet Elizabeth returning from Europe.”  The next day he wrote, “Wireless message came from Elizabeth that her steamer, Rotterdam, will dock in New York today.”