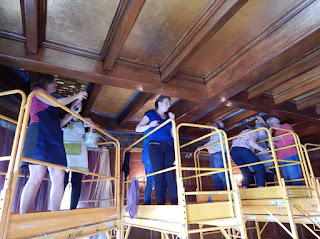 When the Glessners met with architect H. H. Richardson in September 1885 at the Brookline office attached to his house, they were extremely impressed with the space, and asked that he incorporate many of its features into the library of their new Prairie Avenue home.  One feature, however, was recreated in their dining room  - lustrous ceiling panels covered in gold leaf set within a grid of heavy oak beams. 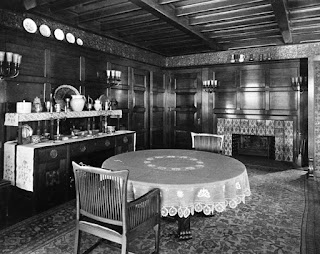 Dining room during the Glessners' occupancy

At first glance, the use of gold leaf might seem to be an ostentatious display of wealth, but such was not the case with the Glessners.  To illuminate their rooms, the Glessners opted for the use of wall sconces rather than large chandeliers suspended from the ceilings.  The use of the gold leaf was practical – it would reflect the light from the five sconces around the dining room and cast a warm light back down upon the dining table. 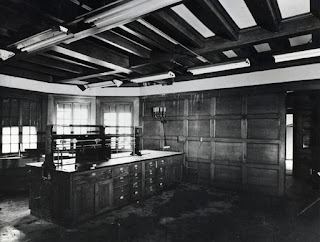 Dining room in 1966, after it was acquired from the
Lithographic Technical Foundation

During the time period in which the house was occupied by the Lithographic Technical Foundation (1945-1965), the gold leaf panels were covered over with ceiling paint and fluorescent light fixtures were installed above the work benches installed in the room, which functioned as a laboratory for researching printing inks.

In November 1989, a substitute finish was applied to the ceiling to replicate the look of the gold leaf, but using aluminum leaf and a French vermeil finish to achieve a gold tone.  Although the finished product suggested the original gold leaf, it did not capture the rich deep tone that can only be achieved with using actual gold leaf.

In August 2014, the museum was contacted by Naomi Lipsky, president of the Society of Gilders, which was planning to hold its annual conference in Chicago in June 2015.  As part of each conference, the Society undertakes a community project on a pro bono basis in partnership with a non-profit organization.  She was wondering if the museum might have a project for the gilders to undertake.  A once in a lifetime opportunity presented itself – some of the finest gilders from around the world would be gathering in Chicago and would volunteer their services to recreate the Glessners’ long lost gold leafed ceiling. 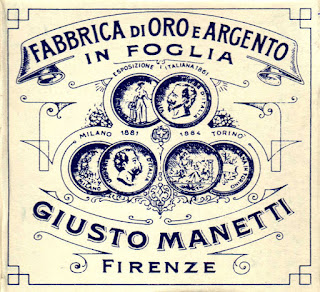 The details of the project were worked out during a site visit in March 2015, and The Richard H. Driehaus Foundation generously agreed to underwrite the cost of the 23 karat gold leaf made by Manetti in Florence, Italy – enough to cover more than 240 square feet of plaster. 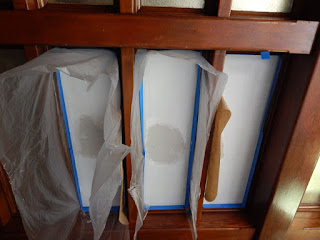 During May, repairs were made to the ceiling where plaster had long ago been patched following the removal of the fluorescent fixtures.  Following that step, all 36 panels were cleaned and coated with a layer of amber shellac to provide the optimal surface for the application of the gold leaf. 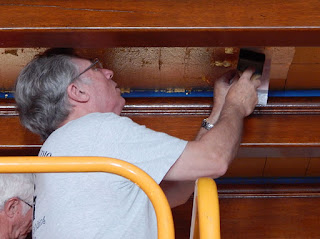 The crew of gilders arrived on Monday June 1, 2015 ready to go.  Led by project manager Michael Kramer, an average of 8 to 10 gilders were on site for six or more hours each day for the entire week to finish the project. 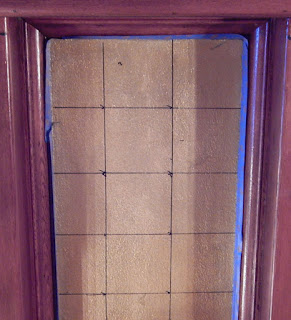 The first step involved laying out the ceiling in a grid of 6-inch squares so that the 3-3/8” leafs would have a pattern to follow, with some overlap.  Once this step was completed, a slow oil size was applied with brush and roller the afternoon before, to the area to be gilded the next day. 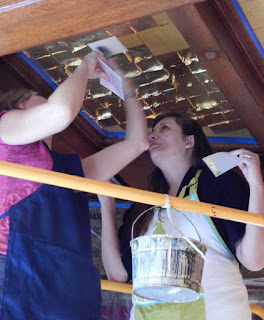 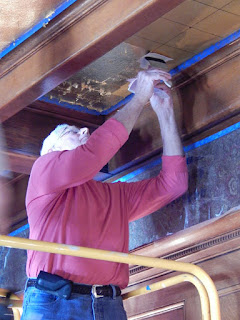 After drying overnight, the size was just barely tacky all of the following day, so that the gilders could lay the leaf of the books following the grid pattern visible through the size. 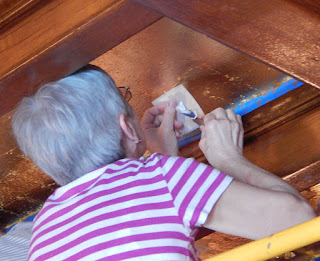 Then the leaf was gently tamped down onto the sand float finish plaster using squirrel hair brushes. 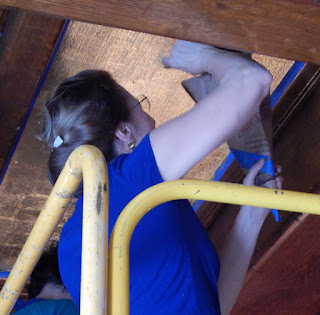 After tamping, the same brushes were used to skew the leaf, and to smooth it and remove the overlaps, capturing the loose pieces in paper cones. 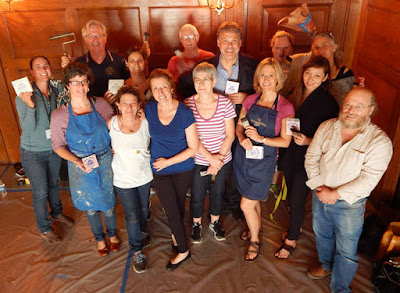 The project was completed on Friday June 5 and is truly breathtaking.  Once again, the rich gold finish of the ceiling reflects the light from the wall sconces, just as it was intended to during the Glessners’ occupancy of the house.  The museum is deeply grateful to the Society of Gilders for their extraordinary work in recreating this important design element to the house.

For more information on the Society of Gilders and their projects, visit www.societyofgilders.org.